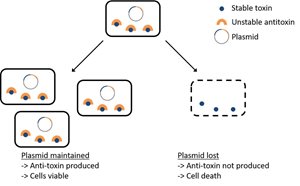 Figure 1. Schematic of how toxin-antitoxin systems act as “selfish genes” to maintain plasmids in a population. Image credit: Jennifer Tsang.

Like many living things in the face of stressful conditions, bacteria have three major survival strategies: fight, flight, or freeze. Katie Wozniak recently wrote about the ability of some bacteria to use a slow-growth state called “persistence” to survive stressful environments. But how does stress induce persistence in bacteria? The evolution of bacterial sensing systems for several environmental factors enable a bacterium to quickly coordinate an appropriate response for survival. One of these responses is a bacterial toxin-antitoxin system that can play a key role in initiating and maintaining persistence.

When toxin-antitoxin systems were first identified in the 1980s, they were called “selfish genes” since their products ensured that the plasmids encoding them were maintained in each bacterial cell. TA systems have two parts: a stable protein toxin that interferes with an essential cellular function and an unstable antitoxin that can be either RNA or protein. Because the antitoxin is unstable, if its genetic code is not available to maintain a continuous supply that runs interference against the toxin, then the toxin can accumulate and damage the cell. Thus, any bacterial cell that doesn’t have the plasmid after replication dies. TA systems have since been found on the plasmids and genomes of many bacterial species, but it wasn’t until much later that scientists realized their role in bacterial persistence.

Instead of expressing more virulence factors to “fight”, or motility systems for “flight”, persister bacteria can use toxin-antitoxin systems to “freeze” and wait out the stressful conditions. Stressors could include many scenarios, such as scarce nutrients, damaging oxidative stress, or cell-lysis proteins produced by competing bacterial species. The most stressful condition with the most significant health consequences for humans is the presence of antibiotics. In the face of antibiotics, bacterial toxin-antitoxin (TA) systems can launch bacteria into an antibiotic-tolerant growth state by inducing a cell-wide shutdown of antibiotic targets.

Toxins can interfere with several cellular functions from cell structure to energy production to protein translation and DNA replication. Some gram-positive bacteria maintain zeta TA systems where the zeta toxin prevents cell wall synthesis by altering a cell wall component. Other toxins damage the inner membrane of gram-negative bacteria like E. coli. This affects  the ability of the bacterium to generate ATP, thus impairing other functions such as DNA replication, RNA transcription and protein translation.

Protein translation can be more directly affected by toxins that either cleave target tRNAs required for protein translation, interfere with the ribosome to prevent tRNA loading, or degrade mRNA. Yet other toxins can block proteins that uncoil DNA for replication and transcription. In all cases, damage from the toxin activity results in a functionally dormant, or near dormant, growth phase. 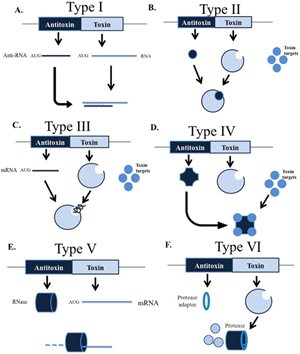 Figure 2. Schematics of each type I through VI toxin-antitoxin system. Image adapted from Fernández-García, et. al, 2016.

In all the TA systems identified so far, the toxins are proteins, but TA systems are separated into six types (I–VI) based on the structure and mechanism of the antitoxin. Type I and II TA systems, being the first identified, are the most well-studied, whereas types IV–VI have only recently been identified.

Type V and VI TA systems also have protein antitoxins, but their activities distinguish them from the previously described toxin/antitoxin interactions. The only described type V antitoxin is an RNase, which degrades toxin mRNA to prevent translation. The type VI antitoxin complexes with a bacterial protease, enabling it to degrade the cognate toxin.

In addition to the described regulation of toxin activity by its cognate antitoxin, many TA systems are also autoregulated at the transcriptional regulator. For instance, antitoxins may have DNA-binding domains that enable them to bind the DNA upstream of the toxin-antitoxin genetic loci and block transcription. This is especially true for type II systems.

The number of TA systems a bacterial species has may influence its ability to cause disease in people. A 2011 study found that pathogens are more likely to have TA systems than their more benign relatives. For instance, their analysis found that Mycobacterium tuberculosis had 38 TA systems while M. smegmatis had none.

Vibrio cholerae was predicted to have 13 TA systems compared to the 4 encoded by V. parahaemolyticus. The 2011 study also predicted 6 TA systems to be encoded by Salmonella typhi, 5 each for Streptococcus pneumoniae and Yersinia pestis, and 10 in the genome of Rickettsia africae.

This study was predictive, however, and the real numbers may be even more striking. Other studies looking more closely at M. tuberculosis report up to 88 potential TA systems, though just under half that number were functional in the laboratory conditions tested (a 2014 review). TA systems for M. tuberculosis were protective against stresses including oxidative stress, nutrient scarcity, DNA damage, low oxygen availability, antibiotics, and during growth in white blood cells. Often persistence could be initiated by multiple TA systems against the same stressor and it’s likely that the un-proven TA systems induce persistence in conditions that weren’t (or couldn’t be) tested at the lab bench.

Here’s what bacterial persistence might look like in the clinic: a patient has a knee replacement, which later becomes infected. The doctor prescribes an antibiotic that interferes with bacterial growth by blocking synthesis of new cell wall. It seems to work at first, but a small population of the bacteria sense the new stress and degrade the antitoxin of a TA system, thus activating a toxin system to shut down cellular processes like ATP generation, protein translation, or DNA replication. The bacteria stop growing and no longer need to synthesize new cell wall. The bacteria maintain this dormant state until they sense that the stress (the antibiotic) is gone. Then they shut down the toxin, begin actively growing again and the infection returns.

The presence of an innate bacterial system that enables drug tolerance is a scary thing in the medical world since it means that all the drug design in the world isn’t going to result in an antibiotic that can kill persister cells. Hope lies in targeting the system responsible for inducing persistence. A 2013 study reported that using the chemical compound acyldepsipeptide was effective against persister cells. It acted by binding the bacterial ClpP protease, causing it to degrade proteins nonspecifically, including TA system toxins. When the researchers treated a mouse model of chronic Staphylococcus aureus infections with their compound in combination with the antibiotic rifampicin, they were able to completely cure the infection. These discoveries have yet to move to clinical therapies, but do suggest that bacterial persistence presents us with a unique infection target to exploit.