Where Do Our Hand Bacteria Come from?

People who live together have similar microbiomes, but the reason why microbes are similar between household members has been more difficult to establish. Do similar sleeping and eating habits create identical microbial niches, or are the microbes themselves shared between household members? A new mSystems article sheds light on this problem by characterizing the microbial composition on different body parts and finds that the presence of fecal microbes on palms suggests that hands are a vector for sharing members of the microbiome.

mSystems: Prevalence and source of fecal and oral bacteria on infant, child, and adult hands 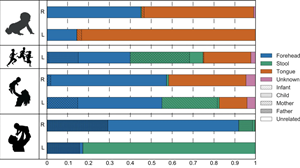 Tracking bacterial sources for the hands of a single family. Source.

Authors Michael Shaffer and Catherine Lozupone used previously collected data on the bacterial composition of fecal, oral, forehead, and hand microbiota from 73 families. Using software that estimates the source environment for different proportions of a bacterial sample – in this case, looking at the microbes on the hands of different family members – the scientists observed that the bacteria on the hands of most family members were most similar to that individual’s forehead (see graphic, right). The infant hands, however, were dominated by tongue bacteria – and some tongue bacteria were found on the hands of the mother and other children in the household, though the analysis wasn’t able to point to whose tongue bacteria was the most likely source. All family members other than the infant also had fecal microbes on at least one of their hands; these fecal microbes could be their own, those from a family member, or those from an unrelated person.

When looking across all 73 families, the scientists found that nearly half of the hands tested contained bacteria of fecal origin, with 1.7% of hand bacteria having fecal origins. Oral bacteria were more commonly found on hands than fecal bacteria, with two-thirds of the hands tested containing some oral bacteria. Between bacteria from oral, fecal, or forehead origins found on the hand, the fecal and oral bacteria were more likely to come from an unrelated individual than forehead bacteria. The source of bacteria varied with age, however. Infants were more likely than adults, for example, to have oral bacteria from themselves on their hands.

Some of these results are intuitive; for example, babies tend to put all sorts of things in their mouths, including their hands, likely repeatedly inoculating oral microbiota onto their palms. But some results are more surprising, such as the widespread observation of fecal bacteria on adult hands – both parents and nonparents. Overall, the data suggest that some gut microbes may be transferred by hands as vectors, which may help in colonizing a newborn infant gut, or in repopulating an adult gut after antibiotic use.

The authors suggest following up this study with more in-depth 16S rRNA gene sequencing or metagenomics studies to more specifically tie the origin source to individual hands. Studies like these are important to understand the types of microbial exposure we experience on a daily basis. Perhaps more importantly, they can inform health care workers of the risks patients may face in the hospital. Care providers working with at-risk patients can assess whether to wear gloves or other barriers to protect patients from unnecessary exposure.