Childhood diarrhea remains a top infectious disease killer, with 525,000 deaths of children under five years old worldwide each year. Rotavirus is one of the most common viral causes of diarrhea, and is particularly common in young children. Scientists have searched for ways to treat rotavirus, including drugs that will disrupt the viral replication centers call viroplasms. A new Journal of Virology report demonstrates a small-molecule compound may disrupt these viroplasms by targeting a viral protein.

JVirology: Identification of a small molecule that compromises the structural integrity of viroplasms and rotavirus double-layered particles

The study describes the activity of a compound, ML-60218 (ML), against assembly of viroplasms, a viral-specific compartment in infected cells where viral replication and assembly occurs. For replication to take place in the viroplasm, the viral RNA-dependent RNA polymerase must be localized inside a double-layer particle (DLP), where the outer-most layer is composed of trimers of the viral protein VP6. ML disruption of viroplasms is due to its activity against this outer VP6 layer. 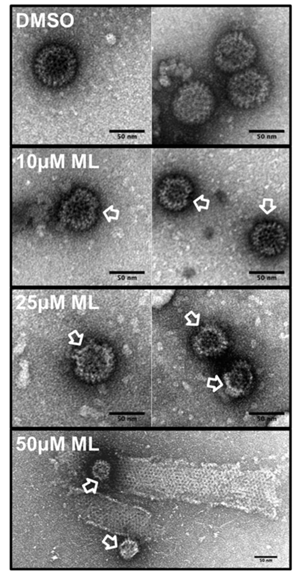 ML treatment had no effect on new RNA production, suggesting its disruption of rotavirus viroplasms was independent of its known activity as an RNA polymerase III complex inhibitor. Further tests suggested ML activity against viroplasms was also independent of new protein synthesis. The scientific team got their first clue as to how ML disrupted viroplasms when they incubated purified DLPs with ML. Only ML, and not other small molecules, was able to destabilize rotavirus DLPs and cause structural damage (see figure, right). The team later figured out that the ML impaired VP6 higher-order structure formation and interfered with VP6 self-assembly.

This observed anti-viroplasm activity suggests ML may act as a framework to develop anti-rotavirus therapeutics in the future. Having identified a viral target in VP6 makes ML a more attractive candidate than other viroplasm-targeting compounds that affect host cell microtubule formation or proteasome activity. Unfortunately, ML itself is too cytotoxic to develop the compound itself, but scientists can study the exact molecular interactions between ML and VP6. Understanding these interactions may facilitate design of a nontoxic compound that targets VP6, paving the way for future development of anti-rotavirus therapies desperately needed in many areas of the world.