Bacteria are ubiquitous because they can survive in nearly any niche found on Earth, often encountering nutrient deprivation, temperature, or desiccation stress. The nutrient-rich media used for routine culture in the lab rarely mimic the complexities of the wild, contributing to a dearth of knowledge of how bacteria survive in these conditions. It is estimated that 5 X 1030  bacteria on Earth live in energy-limited, non-dividing states, including pathogens, viable but non-culturable (VBNC) cells that survive in the population but do not growth on rich media, and antibiotic-resistant persisters. These growth-arrested cells alter their metabolism to survive until nutrient conditions enable them to proliferate. Persisters complicate treatment of infections from chronic biofilms because they are often slow-growing or growth-arrested and linger around after the standard course of treatment. Metabolically arrested cells are different from the bunker-like endospores formed by species like Bacillus subtilis. While sporulation is a well-understood process under strict regulation with accompanying changes in cell morphology, cell survival and exit from growth-arrested states is less clear. So, to understand how bacteria survive in these states, researchers need ways to systematically investigate gene function in energy-limiting conditions.

Understanding a physiologically relevant phenotype, like a cell’s ability to survive in energy-limiting conditions, requires an understanding of their underlying genotype.  Classically, researchers identified genes required for specific phenotypes using  insertional mutagenesis, randomly introducing a transposable genetic element called a transposon. Transposons are short pieces of DNA that insert with relative randomness into recognition sequences within the genome, such as a TA-dinucleotide site. Transposon disruption of  genes enables researchers to create a collection (or library) of bacteria with diverse genetic mutations.

The newly created mutant library can be grown under a condition of interest and scientists can spend weeks screening those mutants for a phenotype of interest, such as absence of growth on a particular medium. Insertional mutagenesis is limited by the number of colonies screened and often results in poor coverage across the genome, leaving many genes unexplored because insertions within them are not included in the library. The development of massively parallel sequencing in 2005 has made screening transposon insertion mutants more efficient because its high throughput nature allows scientists to analyze very large mutant libraries and tie together genotype with phenotype for the entire genome. Combining deep sequencing with saturated transposon insertion mutagenesis gave birth to Tn-seq in 2009.

In Tn-seq, instead of picking transposon mutants one-by-one, an entire library can be screened at once. Then the genomic regions containing transposon insertions are isolated, amplified, and their  junctions mapped back to a reference genome. By comparing the bacterial population growth using reads and viable plate counts at the start and end of the experiment, scientists can determine the relative fitness a gene provides for the organism. This comparison yields a ratio in the form of a gene fitness value. A fitness of 1.0 means that isolates lacking the gene are as fit as isolates with the gene under the specific condition in question;  a fitness of < 1.0 means the gene is advantageous and > 1.0 means the gene is disadvantageous (Figure 1). It may seem counterintuitive that a fitness of <1.0 means a gene is advantageous to a condition but if the gene is necessary in survival during that condition, disrupting it would be detrimental to cell fitness. For example, if your condition is high glucose, you would expect transposon insertions in respiratory genes to have a fitness of < 1.0 because these respiratory genes are necessary to synthesize ATP in that environment. With that in mind, two recent studies have used Tn-seq with subsequent fitness analyses to systematically investigate bacterial survival during growth-arrest.

Rhodopseudomonas palustris is a gram-negative, facultatively anaerobic phototroph that can use light to make ATP and has been used for bioremediation and biofuel production. In  light, with limited carbon or nitrogen, R. palustris can survive for months. Curious about how cells remained viable this way, Pechter et al. turned to Tn-seq to determine the genes involved in cell survival during growth-arrest. They grew their library of transposon mutants in a limiting acetate medium with continuous light exposure. The mutants present at the onset of growth-arrest and at 3, 7, 14, and 30 days post-arrest were identified by sequencing; altogether, they identified 117 genes with decreased fitness in Tn-seq leading them  to hypothesize these genes aid in growth-arrest survival. Three mutants in rRNA maturation and repair of non-functional proteins had a reduction in viability in either carbon or nitrogen starvation. When faced with limiting nutrients, the cell effectively translates vital mRNAs into proteins until carbon becomes more readily available. This comprehensive genome-wide approach allowed researchers to survey all genes without bias for a role in growth-arrest, and pinpointed some genes of unknown function for future study. Presumably, if we have a better understanding of genome function in Rhodopseudomonas, we can target certain genes to increase industrial output. Expansion of the electron donors used to produce H2 for biofuel, optimized digestion of aromatic compounds to increase efficiency of biofuel production, and the increased accumulation of cobalt for bioremediation are just a few applications of beneficial genetic engineering that rely on information about gene function.

Pseudomonas aerguinosa is an opportunistic pathogen that forms biofilms in the lungs of cystic fibrosis patients, making infections difficult to clear. This environment contains low oxygen tension, limiting the pool of terminal electron acceptors available to P. aeruginosa for respiration. Basta et al. used Tn-seq to identify genes necessary for growth of P. aeruginosa following 10 days of carbon- or oxygen- depletion because they often encounter both growth stresses during lung infections. The results indicated that cells need to maintain the PMF and ATP synthesis systems during energy limitation for survival but do so using separate environment-dependent mechanisms. Cells in carbon-limiting conditions maintain PMF by upregulating genes in the electron transport chain (ETC) since they have limiting electron acceptors for respiration. But in oxygen-limiting conditions, upregulation of the ETC is detrimental to cells because there is no terminal electron acceptor.  Under this condition, the cell instead relies on pyruvate fermentation for survival.

Tn-seq provides a rich data set for further genetic validation and biochemical follow-up of candidate genes to elucidate how bacteria survive in energy-limiting and other harsh conditions. The results from Tn-seq provide a starting point for researchers to engineer organisms such as R. palustris for production of valuable aromatic compounds for industrial purposes, or target low oxygen survival machinery of P. aeruginosa to prevent growth in lungs. 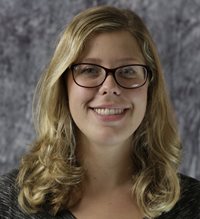 Katherine J. Wozniak is a second-year Ph.D. student in Molecular, Cellular and Developmental Biology (MCDB) at the University of Michigan.