Digesting the Indigestible: How Microbes are Chewing up our Big Plastic Problem

Move over Silicon Valley, the next big thing is microscopic! Microbes are taking over the biotech industry, contributing their unique characteristics toward a diverse array of applications, technologies and new startup ventures. From influencing personalized medicine, improving agriculture and degrading previously undegradable plastics to bioproduction of fuels and 3D printing materials, microbes have infiltrated a slew of industries. No doubt about it, microbiology is the technology buzzword of 2018.

In this second article on MICROBIOtechnology, I'll discuss how science is turning to specialized microbes to degrade previously non-degradable plastics. 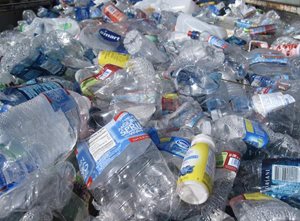 While there are 7 official codes to distinguish between plastics, set by the Society of Plastic Industries, there really are only 2 types that regularly get recycled: polyethylene terephthalate (PET, code 1)  and high density polyethylene (HDPE, code 2). PET is the most common polymer of the polyester family; it is used in a variety of materials including fibers for clothing production, containers for liquid storage, in custom forms for manufacturing processes and in combination with glass fibre for producing resins used in engineering. The monomeric structure is bis(2-hydroxyethyl) terephthalate (see Figure 2) and can be easily made into a polymer through an esterification process.

More than 60% of the PET manufactured globally is used in the production of synthetic fibers (also called polyester), and 30% is used in the manufacture of bottles, often used for soft drink distribution. The remainder of PET is used in varying products such as solar cells, liners in gas cylinders, and even as a 3D-printing material. Though incredibly useful for multiple uses, PET is highly resistant to biodegradation, and has even been implicated in endocrine disorders due to the leaching of hormone-mimicking compounds such as phthalates and antimony into the water or soda PET bottles are often manufactured to hold.

Where There’s an Enzyme, There’s a Way

In the last 10 years, there have been multiple reports of enzymes that can degrade PET, though the evolutionary basis for these enzymes was unknown. Although PET was enzymatically broken down to smaller molecules, there was no indication that these enzymes helped microbes to use PET as an energy source.

That changed in 2016, when a collaboration of multiple research groups in Japan reported a newly discovered bacterium, Ideonella sakaiensis 201-F6 (Yoshida et. al.). The researchers scoured a PET-recycling factory and collected 250 environmental samples, including soil from the plant’s yard and and residual sludge from the recycling process. Many different species were found in these samples, but one stood out. Ideonella sakaiensis 201-F6 exhibited an incredible and rarely seen ability to use PET as its major energy source. This was the first example of enzymatic PET degradation that was linked to catabolism (breakdown to create energy) in a single microbe. 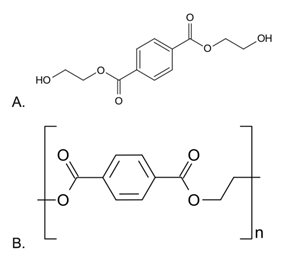 Chemical structure of PET monomer (A) and polymer (B). Source and source.

I. sakaiensis actually makes 2 structurally similar enzymes that break down PET into digestible byproducts for the bacterium: PETase and MHETase. PETase converts PET to mono(2-hydroxyethyl) terephthalic acid (MHET) and MHETase further converts MHET into the 2 monomers terephthalic acid (TPA) and ethylene glycol (EG). TPA and EG are environmentally benign molecules that can be metabolized by a number of different microbes and are not harmful to the environment.

PETase and MHETase bear striking sequence and structural similarity to enzymes that break down cutin (a substance making up the waxy cuticle of plants) and fatty acids (often found in fats and oils). This may hint at the evolutionary origin of the enzymes. "We are surprised at the presence of this bacterium that degrades and assimilates PET, whose commercial production was initiated only [a little more than] 60 years ago, meaning that during such a short time the 201-F6 have evolved an efficient system to metabolize PET," said Yoshida to AAAS. No doubt, scientists will be scouring other plastic recycling and processing facilities for additional species of bacteria that have possibly evolved different versions of enzymes suited to an environment saturated with non-degradable plastics.

In 2015, it was estimated that 8 million metric tons of plastic made their way into our oceans per year, and this will only increase as disposable plastics accumulate. At this quickly increasing rate of plastic disposal, there will be twice as much plastic being added to the environment per year in 2025, resulting in a total of 40 times more plastic in the oceans than there is today.

Approximately  33.6 million tons of plastic were discarded in the United States in 2014, but only 9.5% of it was recycled. For some of us who are meticulous about recycling paper, plastic and glass, this number is astounding. 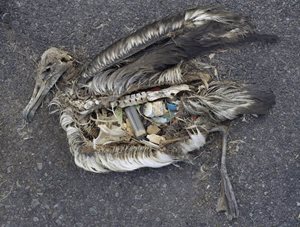 Various plastic products have different chemical compositions, and often plastics are contaminated with things like ink or paper that make them unfit for recycling. Further, separating plastics from other recyclables as well as separating the 7 (or more) different types of plastic from each other is labor-intensive, and so far there’s no easy way of accomplishing this efficiently. At the end of the day, 90.5% of all plastics are not recycled and most of those end up in landfills—and eventually the oceans. Just take a quick airplane ride over Midway Atoll, a remote island in the northern Pacific Ocean. Once a paradise, Midway Atoll is now the foundation of a gigantic plastic island. Various ocean currents join and swirl together, bringing tons of plastic waste from the shores of the U.S. and China to rest on Midway Atoll’s beaches. At the rate we’re going, Midway Atoll’s plastic-covered scenery is a glimpse into the future of America’s waterways and beaches.

As bleak as our plastic waste problem seems, there may be a light at the end of the HDPE-lined tunnel.

Since the discovery of this incredible bacterium and its PETase, scientists at the University of Portsmouth have since accidentally “fine-tuned” the enzyme on the molecular level to be even more efficient, and given the enzyme added functionality to degrade PEF, an alternative form of PET. "Although the improvement is modest, this unanticipated discovery suggests that there is room to further improve these enzymes, moving us closer to a recycling solution for the ever-growing mountain of discarded plastics,” Dr. John McGeehan, one of the collaborators working on the function of PETase, told the Independent in April 2018.

As the function and efficiency of this new enzyme is determined, there is new hope for our growing plastics problem. Imagine the possibility that instead of chucking a plastic water bottle in the recycling bin, you spray a bottle with PETase before putting it in a “plastic degrading” bin.

We first heard the slogan “Reduce, Reuse and Recycle” in the 1970, but the most effective strategy is one that reduces the overall production of plastic, particularly of single-use disposable plastics. Consumers have created enough demand that the coffee shop chain Starbucks will eliminate straws by 2020 and salad chain Sweetgreen will provide biodegradable cups, utensils and bowls. You can be a part of this solution by contacting your government representatives to demand regulations on plastic use, and writing your favorite restaurants to tell them your feelings on plastic use. Combined consumer demand, plastic production limits, and plastic-degrading enzymes together can help stop the scourge of plastic accumulation, giving hope to all who care about the environment.

For more information on microbes and plastic check out these sources: