Who Is Spreading Viruses without Knowing it?

Many infectious diseases are insidious in their spread, in part because not everyone who is colonized experiences the disease symptoms. Each individual encounter of a person with a potential microbial pathogen is a contest between  the number of microbes trying to establish a new ”home” and that person’s immune system trying to keep the invaders out. Sometimes, as the microbial battle is being waged, people who are transiently colonized can act more like vectors, passing the microbe to others without getting sick themselves. How can researchers study microbial transmission in people who don’t get sick?

This question always makes me think of an episode of the TV show Scrubs, in which infectious disease transmission within a hospital was depicted as a glowing green light passed between contaminated surfaces and people. It may not be entirely accurate, but it isn’t far off, either—especially when one considers previous studies using UV-illuminated bacteria. But viruses can be harder to track. A new mSphere article reports a large-scale study of human virus carriage that may help scientists and public health officials better understand how viruses are similarly passed by those without symptoms.

mSphere: Asymptomatic Shedding of Respiratory Virus among an Ambulatory Population across Seasons 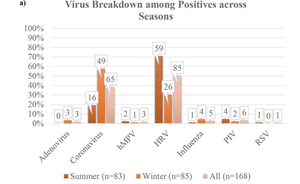 Percentages of individual tests that were positive for each virus for the summer arm, the winter arm, and all participants. The numbers above each bar represent the absolute numbers of positive cases. Source.

Predominant circulating viruses differed between seasonal groups as well, with human rhinovirus dominating in the summer (71.0% of positive infections) and coronavirus dominating in the winter (57.8% of positive infections) (see figure, right). In both summer and winter, the majority of people who described experiencing various disease symptoms tested negative for these common viruses, suggesting their symptoms may be caused by a nonviral pathogen, allergies or an overactive imagination.

The overall carriage rate was fairly low, possibly because only adults were included in the study. Similar studies have been conducted on children, who have widely varying asymptomatic carriage rates that are nevertheless higher than that of adults.

Importantly, over half of participants who tested positive did not have any self-described symptoms. These are the people who are carrying and possibly transmitting viruses without knowing it. They may be presymptomatic, but some are likely to remain asymptomatic carriers and never realize that they are shedding viruses. Understanding how many asymptomatic transmitters there are can help health officials plan public awareness campaigns and provide handwashing stations to help prevent spread of the virus to immunocompromised or otherwise susceptible people.