In the clinical microbiology laboratory, we identify common pathogens like Staphylococcus aureus, Escherichia coli, Streptococcus pneumoniae and others on a daily basis, but at times we come across biothreat agents in a patient’s specimen. Biothreat agents are different from multidrug-resistant organisms (MDROs) by definition. MDROs are defined by the specific antibiotics which they have developed resistance against. For examples, an Enterococcus faecium becomes resistant to vancomycin after acquiring the vanA or vanB gene; an E. coli possessing the kpc gene encoding for a carbapenemase is considered as an MDRO (However, not all E. faecium or E. coli are MDROs). Biothreat organisms (and their toxins), on the other hand, have the potential to pose a severe threat to human and animal health, to plant health, or to animal and plant products.

The biothreat agents I refer to are those listed by the Federal Select Agent Program.  These include Ebola virus, Marburg virus and SARS-associated coronavirus (SARS-CoV), which have caused outbreaks with significant casualties; Bacillus anthracis, used in the anthrax bioterrorism attack of 2001; and Yersinia pestis, the cause of plague outbreaks since 165 A.D.. Some of these pathogens are hard to detect and identify at the level of sentinel laboratories, while others, primarily bacteria, are actively ruled out following protocols and guidelines developed by ASM, the Centers for Disease Control and Prevention (CDC), and the Association of Public Health Laboratories (APHL).

As the basis of the Laboratory Response Network (LRN) developed by the CDC, the APHL and other government agencies, sentinel laboratories are responsible for ruling out biothreat agents and referring specimens and/or isolates to reference laboratories for confirmatory testing. The tests used to rule out bacterial biothreat agents include the oxidase test, catalase test, urea test, motility test, susceptibility test to polymyxin, beta-lactamase test, or even “simple” tests such as the observation of growth morphology and growth rate of the organism. A summary of the workup for biothreat agents including Bacillus anthracis, Yersinia pestis, Brucella species, Burkholderia mallei, Burkholderia pseudomallei and Francisella tularensis is shown in Figure 1 (right). Laboratories should be familiar with the protocol and demonstrate competency of handling suspected biothreat agents by participating in the laboratory preparedness exercise. 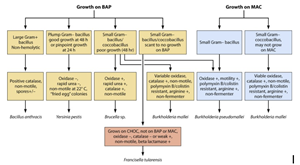 While the guideline focuses on the clinical presentation of the diseases, the characteristics of the biothreat agents, packaging instruction, identification methods and expected test results, very little is mentioned about the potential consequences of unintended exposure to these pathogens. Let’s take brucellosis as an example. Brucellosis is one of the most frequently reported laboratory-acquired infections – the relative risk of contracting brucellosis for a laboratory technologist is 8,000-fold higher compared with the risk among the general population. According to the CDC guideline on brucellosis, potential exposure is categorized into 2 groups, high risk and low risk. The risk is defined as high when a person manipulates a clinical specimen (especially from sterile sites or reproductive system), culture, or positive blood culture bottle outside of a certified Class II biosafety cabinet (BSC), when a person is ≤5 feet from someone manipulating the specimen or enriched material outside the BSC, or during the occurrence of aerosol-generating events. Persons at high risk are recommended to take prophylaxis, usually doxycycline (100 mg, twice a day) and rifampin (600 mg, once a day) for 3 weeks. In addition, serology monitoring is recommended at 0 (baseline), 6, 12, 18, and 24 weeks postexposure. Symptom and fever watch are needed for 24 weeks. While the likelihood of developing brucellosis after following the CDC post exposure prophylaxis and monitoring guideline is below 0.5%, the incident certainly causes stress for everyone involved.

Why is the incidence of laboratory-acquired infection high for biothreat agents?

Our lives as clinical microbiologists can get very exciting when we encounter atypical organisms or biothreat agents (especially when filling out the paperwork for the CDC). It is therefore important for us to stay alert and be sure to use BSC and personal protective equipment to prevent accidents from happening. As laboratorians and care providers, we cannot control what patients come through the emergency department or clinic, nor can we always predict what organism(s) are causing their diseases. All we can do is to familiarize ourselves with the protocols and be prepared.

Even with preparation, nothing is guaranteed. There is an old saying in clinical microbiology: “Microbes don’t read textbooks.” Earlier this year, our laboratory isolated Brucella melitensis from a patient with pain symptoms who was visiting the U.S. This biothreat agent stained Gram POSITIVE from all the blood cultures and media plates (not due to error of technologists), inevitably misleading the workup and the diagnosis, and almost leading to a laboratory-associated exposure (manuscript accepted in the Journal of Clinical Microbiology, in print Spring 2019).

So, you think you know microbiology? Microbes know better.

Siu-Kei (Jacky) Chow is the Technical Director of Infectious Diseases Diagnostics at MultiCare Health System in Washington. He is a diplomate of the American Board of Medical Microbiology. He is interested in emerging infectious diseases, antimicrobial resistance, workflow optimization, and drawings of microorganisms.