If you’re like me, your familiarity with the world of fungi has probably been limited to those you kill (mold and mild “eeew”) and those that (some) people eat: mushrooms like morels and shiitake (*shudder*). But I just can’t get onboard with eating mushrooms. The texture is all wrong and something feels fundamentally wrong with eating something that eats dead things.

In short, fungi are weird and also kind of gross, right?

So, I guess that makes me a mycophobe.

Here’s the thing though, I recently realized that I eat fungi a lot more often than I thought. And I actually like it?! Consider the Penicillium in cheese, the Saccharomyces cerevisiae yeast in my favorite beer (Oberon!), and the baker’s yeast (also S. cerevisiae) in my sandwich bread. But that’s not all the fungi I’ve eaten, and this is where things start to get really cool.

In high school, I was fascinated by Listerine® Pocketpaks®. I can remember swiping out a plastic-like, mint-flavored strip, placing it on my tongue, and waiting to see how long it took to melt (all while freshening my breath). The strips utterly baffled me: Were they plastic? If so, how did they melt?

As it turns out, they’re made of a gloopy fungi sugar called pullulan that is produced by Aureobasidium, a common type of mildew. Aside from melt-in-your-mouth pocket strips, pullulan has uses ranging from vegan-friendly, gelatin-like capsules to edible coatings on foods (e.g., blueberries and doughnuts) that can be easily removed with hot water.

This personal discovery, along with a "Meet the Microbiologist" podcast episode about fungi in agriculture, have me re-considering my feelings on fungi. In that spirit, I want to share with you (mycophiles and fellow mycophobes alike) some redeeming features about fungi that enable them to accomplish herculean tasks in industries ranging from construction to bioremediation.

Mycology, the study of fungi, has a complicated history in the biological sciences. Fungi are eukaryotic, but because they tend to look like plants, eat like vultures, and can range in size from single cells to an organism spanning 3.5 miles, they’ve been hard to place taxonomically. With the advent of DNA sequencing, however, the organisms originally lumped with plants and protists (a collection of single-celled eukaryotes) were re-categorized into two phyla, Eumycota (cap fungi and mushrooms) and Chromista (mildews and water molds). 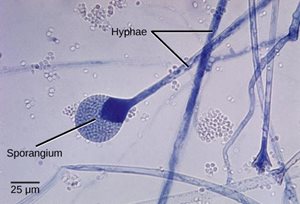 Figure 2. Hyphae and a maturing sporangium (a sac-like sporophore). Source.

Despite the many different members of the fungal world, two features unify all fungi: how they eat and how they grow. Fungi are heterotrophic, so they must “eat” organic matter. But fungi are also osmotrophic. They absorb their food from the environment instead of ingesting and digesting it (maybe this is where my subconscious “eew” factor comes from?). To absorb food, nearly all fungi (an exception being some yeasts) grow as branching networks called mycelia, which are composed of individual hyphae that extend far and wide, burrowing through their environment.

The ability of fungi to absorb and degrade a variety of substances makes them masters of decomposition, their primary role in the environment. As the mycelium grows, some hyphae diverge to become sporophores. These specialized cells mature to release a fungal means of reproduction: spores*. If hyphae encounter hyphae from another fungus of the same species, they can undergo sexual recombination of their chromosomes prior to releasing spores. And in some fungi, the hyphae grow vertically as they differentiate into sporophores, sprouting up to intertwine with other hyphae and becoming the stalk, cap and gills of a mushroom that releases spores into the wind. 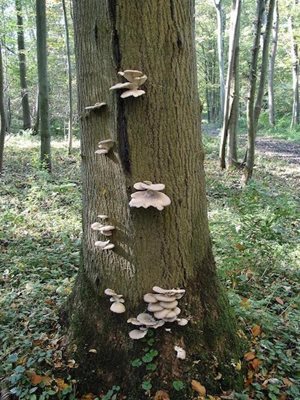 In other words, that tasty truffle is a fungal sex organ.

Some of the earliest known uses of fungi were of their pigmented metabolites, which could dye textiles without requiring a fixative to set the dye on the fabric. For instance, rock lichens such as Roccella tinctoria were harvested for the orchil pigment to dye linens a brilliant purple. The lichen Parmelia sulcata yields a pale yellow dye, while the bracket fungi Pycnoporus cinnabarinus yields a golden-brown dye. Unfortunately, because lichen dyeing requires harvesting the entire organism—which grows quite slowly—it isn’t very sustainable and can quickly devastate lichen populations.

Lichens are a symbiosis between fungi and algae that grow on surfaces ranging from trees to rocks in a variety of habitats. Many are edible and have been incorporated into the diets of indigenous peoples and/or those experiencing food scarcity. Commercially, lichens have been used in deodorant, toothpastes, salves, perfumes and even paint to prevent mildew growth.

Conversely, the competition between fungi and other microbes, like bacteria, is the foundation of an ancient use of fungi metabolites that is alive and well today—medicine. Many microbiologists are familiar with the serendipitous discovery of the antibiotic penicillin by Alexander Fleming, but that is only one of the many medicinal treatments that originated from fungi. Many other antibiotics, such as cephalosporins, are also products (or derivations) of fungi metabolites to ward off competitors, but antibiotics are only one of many ways that fungal products improve human health.

Some fungal compounds are prescribed to treat diabetes (e.g., acarbose from Actinoplanes spp., which to block sugar absorption) and high blood cholesterol levels (statins, produced by Penicillium spp.). Other fungal therapies include the immune modulator cyclosporin produced by Tolypocladium inflatum and the fungal siderophore desferoxamine. Cyclosporin is used as a therapy for organ transplants and autoimmune diseases while desferoxamine treats iron overload disorders and toxic overloads by scavenging excess iron for safe excretion in urine. Lastly, a chemical produced by Claviceps purpura known as ergot has been used both as a migraine therapy and by midwives to induce labor, despite an infamous past that I’ll discuss further in a future blog post.

More recent innovations have moved fungi applications from the reductionist use of individual chemicals to a holistic use of the entire organism. Commercial examples range from small—eco-friendly shipping materials and vegan leather for shoes and purses—to large, with biodegradable fungi insulation and custom-molded furniture. Fungi have long been used in agriculture and have recently been commercialized, as discussed by Raymond St. Leger in an episode of “Meet the Microbiologist.” But two other industries, conservation and bioremediation, are relatively new to the fungi scene.

Globalization and industry have had damaging effects on the natural world, disrupting ecosystems and poisoning water sources—fungi can help with that. Fungi are both hardy and resourceful, capable of using unusual food sources and absorbing large quantities of potentially toxic heavy metals such as lead, cadmium, mercury, chromium and nickel. In one study, Aspergillus terreus absorbed 59 mg of lead per gram of fungi! For reference, 1 mg of lead per day is harmful to children. In another study, researchers showed that Cryptococcus neoformans traps energy from ionizing radiation with the pigment melanin, and thus use it to enhance growth.

To address big problems, scientists have turned to big fungi, using multicellular mushrooms that also absorb heavy metals from contamination sites, degrade hydrocarbons in oil spills, and may even remediate radioactive waste. But what to do with the contaminated fungi? One scientist suggests harvesting the heavy metals from fungi for use in batteries and microchips, and burning the radioactive fungi to reduce the amount of radioactive waste. Meanwhile, conservationists are using fungi to control a different type of “pollutant,” undesirable organisms such as invasive species. For example, the National Park Service has employed Beauveria bassiana to help control the emerald ash borer beetle, an invasive species from Asia that is devastating the U.S. population of ash trees. Meanwhile, the Ocean Blue Project uses the oyster mushroom (Pleurotus ostreatus) to both ward off invasive species of weeds and decontaminate local waterways from runoff pollutants such as oil, pesticides and even bacteria like E. coli. 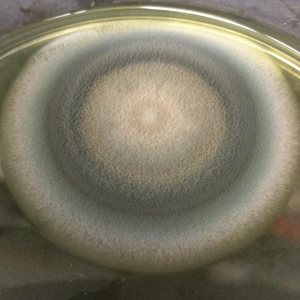 While I call myself a microbiologist, the truth is that I’m a bacteriologist. At the research bench, my focus has been on how bacteria gather iron using siderophores. And sure, I’ve read papers and attended seminars where viruses and immunology were primary topics, but along the way I’ve ignored (and actively discarded in the form of contaminated agar plates) an important group in microbiology: fungi. Besides learning about the myriad ways fungi can help humans, there are other reasons why we should stop overlooking fungi that I plan to discuss in future posts. For now, I’ll say that after learning about the amazing things that fungi are capable of, I’m proud to be a mycophobe no more (even if I still won’t eat that mushroom).

Stay tuned for future posts exploring the pathogenic nature of fungi and ergot, a fungus whose hyphae span both history and medicine.

*a distinct function from the similarly named bacterial survival structures