Cytomegalovirus and other opportunistic infections are often thought to only have negative consequences for those experiencing overt disease symptoms. A new Journal of Virology study reports the effect of subclinical CMV infection on the rhesus macaque response to the flu vaccine, suggesting an influence of subclinical infections on host immunity.

Microbial pathogens come in many flavors. Some cause acute infections; some cause chronic infections. Some are primary pathogens; some are opportunistic pathogens. This latter category is often thought to infect many people, but only cause disease in those with weakened immune systems or who are otherwise vulnerable. A new Journal of Virology study reports that infection with cytomegalovirus (CMV) without overt disease can change the gut microbiome composition and negatively affect host immune responses to vaccination.

The research, done by a team of scientists including first author Clarissa Santos Rocha and senior scientist Satya Dandekar, looked at characteristics of rhesus macaques likely to be subclinically infected with CMV. The researchers hypothesized that latent infections may affect the host immune system. They observed differences in the gut microbiome composition and in the immune response of animals infected with CMV.

Scientists know that overt viral infections such as human immunodeficiency virus (HIV) infection can change the gut microbiota composition, and here this was extended to chronic subclinical infections caused by CMV. In this study, the researchers tested CMV-infected animals that were housed in a controlled indoor facility (specific-pathogen free, or SPF, animals) and compared them to animals living in an outdoor environment. The animals in the outdoor environment were exposed to viral infections endemic in naturally breeding cohorts of nonhuman primates, including RhCMV (a cytomegalovirus specific for rhesis macaques) and other herpesviruses. Animals housed outdoors had a higher number of butyrate-producing bacteria in their microbiome; this result was replicated when indoor animals were experimentally infected with RhCMV.

Gut bacteria influence the host immune responses and can initiate viral reactivation, in part through signaling with short-chain fatty acids like butyrate that are detected by host cells. For example, butyrate can reactivate latent viral gene expression through its inhibition of histone deacetylase activity. The authors found RhCMV reactivation, as measured by antibody levels, correlated with the abundance of butyrate-producing bacteria. The RhCMV-infected animals also had more total lymphocytes and more cytokine-producing T cells, including higher amounts of IFN-gamma, TNF-alpha, IL-17, and IL-4, indicating an altered cytokine milieu that could affect the immune response to other potential pathogens. 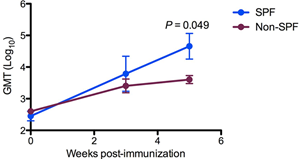 Antibody titers against influenza were higher in animals with subclinical infections than SPF animals. Source.

Were these microbiome and cytokine differences due to subclinical infection or to environment? To determine whether different housing environments played a role in these findings, the outdoor animals were moved into SPF conditions, after which the immunity and gut microbiome composition discrepancies lessened. This indicates at least some of the observed differences were environmental.

Serology studies show 60-70% of adults in the U.S. and Europe and up to 90% of adults in Africa and Asia have been infected with CMV, a virus that often persists latently throughout life. this Journal of Virology study suggests that subclinical CMV infection may lead to different vaccine responses, and opens up the possibility that other subclinical infections may also influence immunity. This adds an important consideration in generating effective vaccine strategies for people with diverse backgrounds, including viral exposure and infection. Further, this study highlights the complexity of host-pathogen dynamics, where the presence and host response to one microbe, even when not causing overt disease, can influence the host response to other potential pathogens.