Dietary fiber plays an important role in gut health, but new research from mSphere shows that not all sources play the same role: researchers found that specific starches select for different microbial communities.

Although microbiome research is an evolving field, many studies have been published on the benefits of dietary fiber, which increases bacterial diversity and abundance, decreases inflammation, and improves gut health. But all dietary fiber is not equal: it can be grouped into soluble, insoluble and resistant starch. A new mSphere article finds that different types of resistant starch lead to different compositions of microbiome members, which in turn influences gut health.

The research team, led by first author Frederick Warren and senior scientist Michael Gidley, used pigs as a model, because pigs’ microbiome composition is similar to that of humans, and like us, pigs are omnivores that eat a wide variety of foods. Pigs were fed foods with different starch types, such as plants, raw potato or corn, cooked potato or corn, and enzyme-degraded potato or corn sources. 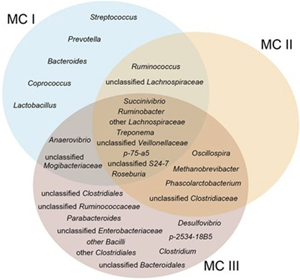 The researchers found that 3 different microbial community types were fostered during the course of the experiment, with each enriched in different bacterial species (see figure, right). Starches are classified into 1 of 3 categories based on their molecular structure, and the 3 microbiome communities observed aligned with starch structural types.

Pigs fed cooked starch and pasta samples developed MC-I, which had the highest number of genes predicted for starch and sucrose metabolism and polysaccharide degradation. Pigs fed hydrated potato and chickpeas developed MC-II, which contained genes predicted to encode enzymes to degrade nonstarch polysaccharides like pectin and cellulose, while pigs fed cereal grain-based diets developed MC-III. Despite differences in composition, the microbial communities shared some characteristics, such as similar gas production between MC-I and MC-II and production of high levels of small-chain fatty acids like acetate and proprionate.

These studies link the microbiome composition to the fermentative products produced in the colon after specific starch types were ingested, focusing on the lower intestine. As research continues to refine associations of particular microbial communities with human health effects, knowledge of how pre- or probiotics can promote gut health will grow. Studies like this one ensure a scientific basis not only for the roles that our gut microbes play, but for the dietary means by which we can influence them.