It Happened One Night—in the Clinical Microbiology Lab!

One night last October, a woman went to the emergency room with a severe headache. Her initial exam at about 10 p.m. wasn't particularly concerning, and she was held for observation and given pain medications. Just before 2 a.m., however, she was deteriorating and the clinical staff decided to perform a lumbar puncture to collect cerebrospinal fluid (CSF) to evaluate for meningitis and to collect blood for blood culture in addition to other therapeutic interventions. The CSF and blood culture bottles were delivered to the clinical microbiology lab receiving window at around 3 a.m. I was at home asleep. You probably were, too.

Most clinical microbiology labs operate on a three-shift system with approximately 8-hour shifts. The daytime shift usually runs from around 7 a.m. to 3:30 p.m., the second or evening shift runs from 3 p.m. to 11:30 p.m., and third or night shift runs from 11 p.m. to 7:30 a.m. with breaks and a short overlap accounted for. In some labs, the night shift, or even both the evening and night shifts, are covered by general laboratory technologists (not a technologist specializing in microbiology) and process only emergency specimens (positive blood cultures, STAT Gram stains, other rapid tests, etc.). What happens in the microbiology lab at night to some extent depends on the size and capabilities of the hospital, and ranges from only emergent sample workup in smaller labs to nearly full service, including some culture workup. Lab staffing may also be impacted by lab automation systems that include near-continuous monitoring of cultures for growth and notification of lab staff when a culture is ready for workup—similar to what is done now for blood cultures. One potential impact of automation on lab staffing is that with near-continuous culture monitoring, some cultures that would have previously been evaluated only once per day, on day shift, are instead flagged as ready for workup on the evening or night shift, though there may not be technologists available to perform, coordinate or monitor workup at these times.

Does the time between when a test is ready to be performed and the arrival of morning shift technologists even matter? Timely reporting of critical clinical microbiology results can significantly impact patient care—and even a couple of hours makes a difference for patient outcomes for blood cultures. Another, older study demonstrated that more rapid clinical microbiology tests, compared to standard overnight tests commonly used at that time (pre-molecular era), reduced the time to reporting of identifications and susceptibility results by about 10-15 hours, and reduced mortality for patients by about 6.5%. The above study and another from around the same time both showed a difference in patient outcomes with more rapid testing implementation, and both looked at labs that were staffed on evening shift. However, a different study that looked at a laboratory that was not staffed on evening or night shift did not show a clinical impact when more rapid identification/susceptibility technology was added. Another element to consider is if results are generated on the evening or night shift, will those results be utilized overnight? A more recent meta-analysis of 31 quasiexperimental studies comparing the use of rapid molecular microbiology tests to conventional tests for patients with bloodstream infections did observe a beneficial impact on patient outcomes, however, on subgroup analysis the positive impact was limited to studies in which an active antimicrobial stewardship program influenced provider decisions. Recent IDSA/SHEA stewardship guidelines emphasize that "rapid testing of blood cultures in addition to conventional culture is helpful, but should be guided by the antibiotic stewardship team for maximum benefit to the patient." There is evidence that supports the claim that improving turnaround time on clinical microbiology test results can improve patient outcomes. It seems intuitive that this also applies to providing staffing coverage for essential clinical microbiology tests at all times of day.

One dilemma with providing this coverage in the lab 24/7 is that there is currently a very serious laboratory technologist shortage in the United States (more on this later). It is well established that shift work at night can have a detrimental physical and psychological impact on the worker, although to a lesser degree if the schedule is constant (not moving between different shifts). Many technologists hired into large labs start on the evening or night shifts (after a training period on day shift) and work there for several years before moving to day shift, although some people prefer alternative schedules and choose to work evenings or night shift because of preference, family obligations, or other reasons. Though some of the more complex testing in microbiology labs is generally not performed on evening and night shifts, the testing that is prioritized on these shifts is naturally some of the more essential testing for timely patient care. 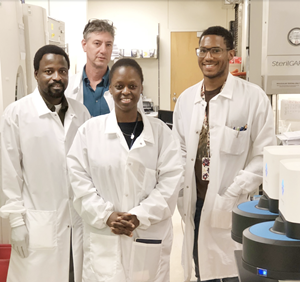 Back to the story I led off this post with. While most everyone in town that night back in October was at home asleep, Mike Steiner was not. He was on the other side of the Thomas Jefferson University Hospital clinical microbiology lab receiving window at 3 a.m. when the CSF and blood culture bottles were delivered. The blood culture bottles were loaded into the automated monitoring blood culture incubators, and the CSF was prepared for a Gram stain and to be evaluated using a multiplex PCR meningitis panel test. The Gram stain showed very few gram-positive cocci in pairs, which the lab immediately reported to the physician caring for the patient. The multiplex PCR assay was also positive: Streptococcus pneumoniae detected. Again the physician was called with the identification, at just after 4:30 am (blood cultures also later grew S. pneumoniae).

While doctors and nurses interact directly with patients, clinical laboratory technologists also play a large and active role in health care—in one study, more than 50% of emergency department patients and 98% of admitted patients had clinical lab tests performed. The results generated by technologists are critical for  disease diagnosis and therapeutic decision making. Although all areas in the clinical laboratory are very important (such as chemistry, hematology, etc.), I think that microbiology is the most interesting and exciting area in which to work! If you are interested in getting the right training to start a career as a clinical laboratory scientist, you can check to see if there is a technologist training program near you.