Forget your Kombucha, Bacteria Made my House - The Future of Microbial Manufacturing

These days, bacteria wear many hats as they become the fashion designers, artists, and architects of the future. 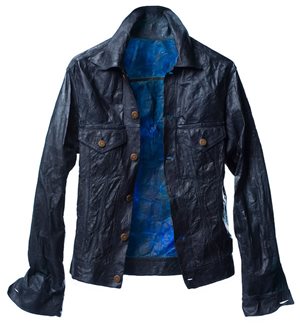 Bio-denim jacket by Suzanne Lee, made using a mixture of sugar, yeast and other microorganisms.

Picture this: It’s 2030 and you’re waking up in your apartment made of smooth, grey biocement bricks. Rubbing the sleep out of your eyes, you climb out of bed and turn on your bioluminescent lamp to select today’s outfit. You opt for a jacket to combat the early spring breeze: your new favorite is a moto jacket grown from bacteria and sugary tea;  both stylish and functional. You perch briefly at your microbe-made desk, grab your bacterial pigment ink pen, and write out your daily to-do list on cellulose paper. Toss a yogurt into your bag, and you’re out the door.

While this scenario may sound far-fetched and perhaps nauseating to some members of our germaphobic society, a microbe-made future is becoming reality for a number of different industries. Designers and scientists are eschewing the “ick” factor and turning to microbes to remedy ecologically unsound industries, such as paper, construction, and textiles. Synthetic biology is not a new concept, and its applications have been explored previously, and growing environmental concerns are making it an attractive alternative to traditional manufacturing. Traditional manufacturing utilizes environmentally harmful processing steps and can involve use of non-renewable resources, such as fossil fuels, which are used faster than they can be produced. Comparatively, microbial production takes advantage of the quick, easy, and relatively unlimited growth of microbes and the complex molecular products they secrete, with a much lower impact on the environment.

While many in our society tend to associate microbes with infections and unhygienic conditions, most bacteria are harmless, and some can even benefit humans in a multitude of different ways. We already use bacteria to make a variety of common consumables, such as yogurt, cheese, insulin and antibiotics, but expansion outside of the food and drug industries has been slow.

While older, established companies such as Novozymes have been ahead of the curve in developing innovative approaches in microbial manufacturing, a few notable start-up companies are also starting to develop an interest in bridging the gap in microbial manufacturing. bioMASON, a biotechnology start-up, uses bacteria to grow construction materials, such as bricks. Traditionally manufactured bricks are typically burned in a kiln to add strength to flexible starting materials such as clay. This brick-burning process creates substantial pollution, releasing soot, smog and greenhouse gases. The technology developed by bioMASON eliminates the need for a kiln and is far more expedient, with bricks grow in a matter of days. As Ginger Krieg Dosier, CEO of bioMASON explains, “bioMASON’s technology and products are made in ambient temperature- and do not require heat for curing. The technology also includes use of low-cost waste streams as raw materials.” 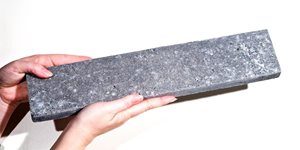 Specifically, bioMASON’s bricks are made by combining urea, calcium ions and a urease-producing bacteria, such as Sporosarcina pasteurii, with an aggregate, such as sand or pebbles. This sets the stage for a series of chemical reactions that enable the bacteria to create calcium carbonate—also known as limestone, which binds the sand particles together. The high level of urease-production in brick-making strains is key, in that hydrolysis of urea by urease is necessary for carbonate production. The bacterial urease breaks down the urea added to the brick mixture, which causes carbonate to form. Hydrolysis of urea also creates ammonia and carbon dioxide, which changes the pH of the brick-making mixture and enables calcium ions to interact with carbon dioxide. The calcium-CO2 structure then associates with minerals provided by the bacteria to create hardened crystals. After mixing, the bacteria-aggregate blend is pressed together in a brick-like shape and allowed to harden for several days at room temperature. The bioMASON biocement bricks rival traditional bricks in terms of strength, overall product durability, and customization.

While bioMASON is rethinking the materials that shape our modern societies, PILI is recoloring the ink industry. PILI produces a rainbow of bacterial pigment-based inks that can be used for printers, pens, and textiles. One of PILI’s goals is to create re-fillable, “feedable” pens using bacteria with vivid pigments that can be replenished  using a sugar solution to encourage bacterial growth. Currently, however, PILI is producing microbe-free dyes by purifying pigments from fermented bacteria, which might be a more accessible option for a market wary of bacteria. The process of isolating pigments from bacteria is so simple, it can be done in a home kitchen. Accordingly, PILI is working on developing a kit that would enable consumers to create their own bacterial ink.

One of the first pigments PILI developed is a vivid navy blue derived from a Streptomyces species found in soil. This  species is likely related to S. coelicolor, which has been utilized by other designers, such as Natsai Audrey Chieza, to create unique, eco-friendly textiles. While certain strains of bacteria naturally produce a spectrum of differently colored pigments, advances in biotechnology have expanded the range of colors that can be created. As PILI co-founder Guillaume Boissonnat told JSTOR Daily, “Theoretically, any color can be produced by microbes. I can think of a microbe species for any color of the visible spectrum—red, violet, green, yellow.” In particular, Streptomyces can be modified to produce yellow, orange, and yellow-red pigments by altering the actinorhodin biosynthesis pathway through interspecies cloning. Other microbes naturally produce unique pigments. Many of the natural pigments produced by bacteria, such as carotenoids, are the same pigments found  in fruits and vegetables. Others make unique pigments, such as Serratia marcescens. which synthesizes a bright red pigment, known as prodigiosin. Prodigiosin has been studied for its anti-malarial and anti-cancer properties, creating potential for multi-functional products that can be used to protect ourselves from disease, though resistance from repeated exposure is always a concern when combating infectious diseases and cancers.

Similar to bioMASON and PILI, the Biocouture project strives to integrate  biologically-derived materials into everyday products, targeting the fashion and textile industries. The clothing manufacturing industry is a complex and often overlooked source of pollution and waste, as landfills pile up with an estimated 12.8 million tons of unwanted clothing annually. Biocouture, a collaborative design project founded by fashion designer Suzanne Lee, started by experimenting with bacterial cellulose, a fibrous material that starts out sticky but takes shape as it dries. Bacterial cellulose is a unique material that can take on many textures, as demonstrated on the aptly named Youtube channel, Bacterial Cellulose, which highlights a spectrum of cellulose consistencies ranging from gelatinous to leathery. The versatility of bacterial cellulose enables it to resemble fabrics such as cotton or leather, depending on the strains and drying processes used. Lee’s textiles are grown in vats of sugary green tea supplemented with kombucha cultures. These useful cultures are accessible for commercial purposes, safe for humans, and easy to grow. Particularly, they provide an easy source of Acetobacter xylinum, which can synthesize cellulose from  glucose. A. xylinum can use ethanol, sucrose, and glycerol as alternative substrates, which could be beneficial for using alternative waste streams to make textiles.

Lee views the development of bacterial cellulose clothing as an ecologically-sound alternative to conventional textile production as well as a potential means to build additional utility into our clothing. She told TED, “In synthetic biology, you can produce anti-malarials that could be used in pharmaceuticals. But could we get bacteria to spin us a thread that also has anti-malarial properties? We can start to build layers of functionality into these materials.” For example, your multifunctional workout gear of the future could help you fight off MRSA strains lurking on gym mats and equipment. While antimicrobial gym gear isn’t a good idea for everyday use, due to the threat of antimicrobial resistance, it could be strategically utilized to protect athletes during outbreaks. 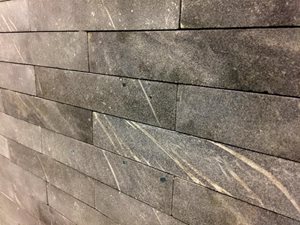 Dosier from bioMASON acknowledges that the manufacturing industry is beginning to change in favor of new, ecologically-friendly, bio-based techniques. “bioMASON is fully aligned with the new industry shift towards biology-based manufacturing,” she said. “We as a global society are at the verge of a bio-based revolution, and believe there are many materials that can be made by harnessing the power of biology and partnering with nature.” Collaborating  with nature during the manufacturing process is key to forging a more sustainable future.

bioMASON, PILI, Biocouture and other similar companies recognize that the time has come to employ the hard-working microbes that surround us. Bacteria can help us in a variety of ways, from making crucial enzymes in our digestive system to crafting new houses and clothing, and we should be creative in our use of them. So sit back, relax, and let your microscopic friends living in yesterday’s cup of tea grow you a new jacket (instructions here).

Rita Algorri is a freelance writer, Ph.D. candidate in Clinical and Experimental Therapeutics, and Master's student in Regulatory Science at the University of Southern California.