Researchers have discovered a new type of antibiotic resistance against the common antibiotic ciprofloxacin. The resistance was discovered in the opportunistic pathogen Pseudomonas aeruginosa and is described in the journal Antimicrobial Agents and Chemotherapy.

The new mechanism complements an already full arsenal that bacteria have to fight ciprofloxacin. Ciprofloxacin, or CIP, is a quinolone, which acts by locking DNA topoisomerase and gyrase enzymes in place as they nick DNA to be unwound. The accumulation of these enzyme-DNA complexes leads to cell death. To avoid CIP-mediated death, cells can alter the intracellular concentration by decreasing porin expression or increasing efflux via membrane-bound pumps. Cells can prevent CIP binding to its target, or alter the drug by adding an acetyl group. In the new research, first author Victor Chávez-Jacobo and senior scientist Martha Ramírez-Díaz describe a novel type of alteration: the addition of a phosphoryl group to CIP. 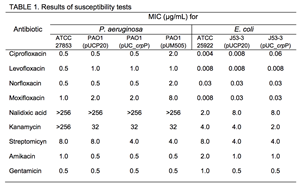 Drug susceptibility of P. aeruginosa and E. coli with and without crpP expression. Source.

The scientific team first observed that CIP resistance was transferred by the plasmid pUM505, a plasmid originally identified in a clinical isolate and well-characterized for its virulence and resistance-conferring sequences. To identify the gene responsible for CIP phosphorylation, the scientific team analyzed the gene sequences encoded and noted homology between one gene, orf131 (renamed crpP), and an aminoglycoside transferase from Mycobacterium smegmatis. They tested crpP function by expressing it in Escherichia coli or P. aeruginosa and demonstrating an increase in CIP minimal inhibitory concentrations (MICs). P. aeruginosa expressing crpP had increases in other quinolone-family drug MICs, but neither expression in E. coli nor P. aeruginosa affected the MIC of other antibiotics, including aminoglycosides (see table, right). Liquid chromatography-tandem mass spectrometry studies on CIP incubated with purified CrpP protein determined that the resistance was due to phosphorylation of the drug.

Plasmid-encoded resistance is more easily spread between bacterial strains and species than chromosomally-encoded resistance, making the discovery of crpP on a plasmid that much more frightening. That means this discovery is not only dangerous for those suffering P. aeruginosa infections, but that the gene could be passed to related organisms, leading to the spread CIP resistance. The good news is that identification of the gene will make surveillance for resistance easier, hopefully stopping its spread before having a large impact in the clinic.