The Flies Have It (a Culturable Endosymbiont Bacterium, That Is)

Recent studies described the nutritional contributions of the insect gut microbiome, which is analogous to the mammalian gut microbiome: a complex of microbial species that line the animal digestive tract. Many insects also have another microbiome member that is unique to insects: the bacterial endosymbionts, maternally inherited bacteria that live inside insect cells. Because the bacteria are contributed by the female during fertilization, all organs of the insect contain these intracellular bacteria, which play a number of roles affecting insect development, behavior, and fertility. The tight evolutionary relationship between insects and their endosymbionts makes these bacteria difficult to culture in vitro, but an mBio study reports the first culture of the Drosophila endosymbiont, Spiroplasma poulsonii. 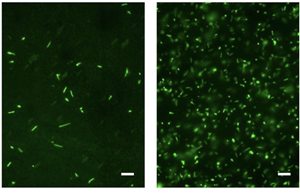 This is the first time in the decades of research spent on the organism that researchers have been able to continuously cultivate S. poulsonii in culture conditions. These decades of research were necessary to learn the unique requirements of S. poulsonii, including the requirement of host-synthesized lipids. The bacterial genome has degenerated to the point that it cannot synthesize its own lipids, and lipid supplementation proved a vital component. Building on previous research, first author Florent Masson and senior scientist Bruno Lemaitre were able to continuously culture the bacteria (see figure, right).

The researchers sequenced the bacterial genome and investigated the bacterial transcriptional differences with and without its normal host ”home,“ which revealed a unique transcriptional pattern for the two different growth conditions. The genome contained several homologous genes to virulence factors in other fly pathogens and endosymbionts, but the expression of most of these genes decreased during in vitro culturing, demonstrating that these genes likely play a role in maintaining the bacterial-host relationship. Culturing conditions didn’t significantly alter this relationship, as a one-year old bacteria culture was able to successfully infect 96% of flies. These newly infected endosymbionts maintained the same well-characterized phenotypes in their host.

Drosophila are a major model organism, with a full molecular toolbox for fly genetic manipulation. Now researchers can turn to developing the techniques for manipulating S. poulsonii to test the role of different genes and pathways, to become the first genetically tractable insect-endosymbiont pair. Dissecting the genes required for bacterial growth inside and outside of the host insect cell will deepen our understanding of symbiosis, evolution—and also has practical implications. Because endosymbionts influence fertility, the ability to manipulate these microbes provides a potential mechanism for insect control—not just for pests like Drosophila, but for disease vectors like mosquitoes and tsetse flies, which have their own bacterial endosymbionts.