How the Gut Microbiome Provides Nutrients to Its Host: Learning from the Bugs of Bugs

While a lot of microbiome research focuses on applications to human health, all macroorganisms have microorganisms that exist on and in their cells and contribute to the health status of the host. This includes the bugs of bugs: bacterial symbionts that live in the insect hosts. Just as the bacteria in the human gut break down food molecules to make them accessible to our cells, so do the bacteria living in fruit flies provide nutrients to the flies. The microbiome of Drosophila is less diverse than that of humans or other mammalian model organisms, allowing scientists to study nutritional contributions of the microbiome in a less complex system. Two recent publications in mBio have highlighted some of the roles played by different fruit fly microbiome members:

The first mBio report showed that the microbiome provides thiamine to fruit fly larvae when they’re raised on a no-thiamine diet. Thiamine, also known as vitamin B1, is plays a vital role in development from larvae to adult flies; without thiamine, larvae are unable to pupate and develop into adult flies. The authors showed that common microbiome member Acetobacter provides thiamine to the larvae when none is present in the diet. The research supports the hypothesis that animal microbiota help provide their host animals with essential B vitamins. 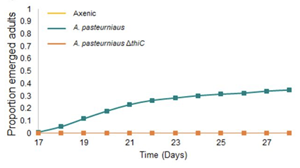 Proportion of gnotobiotic eggs that emerged as adults when associated with wild-type and mutant A. pasteurianus. Source.

To demonstrate the specific role of Acetobacter, first author David Sannino and senior scientist Nicolas Buchon used gnotobiotic flies, or flies with a defined microbiome. This means the researchers can add or omit different microbiome members, and they used this method to test the contributions of different bacteria, including Acetobacter. Although there was no difference in egg laying between flies with a conventional microbiome and those that lack Acetobacter, the authors observed that flies which weren’t colonized with Acetobacter and which weren’t fed thiamine failed to emerge from eggs. The defect was rescued by colonization with Acetobacter, and rescue depended on Acetobacter production of thiamine, since flies colonized with a thiC mutant of A. pasteurianus also failed to produce adults (see figure, right). This demonstrated a vital role of the microbiome for this essential nutrient.

The second mBio report, also from the Buchon lab with first author XiaoLi Bing, looked at the effect of microbiome-sourced nutrients on development of a related fly species, Drosophila suzukii. These fruit flies lay their eggs inside soft berries (unlike other species, which lay their eggs on or near food sources). The larvae develop inside the berry, making these flies more damaging to crops than other Drosophila pests. Its unusual life cycle led the research team to investigate the role of the D. suzukii microbiome in nutrient acquisition, which they showed to be essential to flies raised on fresh fruit. 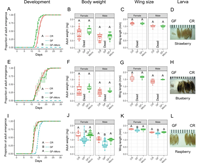 The researcher team again compared different microbiomes within the flies, this time comparing lab-raised or wild-caught flies to germ-free flies without any microbiome. When fed a diet that meets all of their nutritional needs, having a microbiome was actually deleterious to fly fitness; germ-free flies lived longer and had more offspring per female. The tables turned, however, when flies were fed a berry-based diet; here, the gut microbiota was necessary to provide specific protein nutrients to the flies during development. While germ-free larvae raised on raspberry were able to emerge as adult insects (though they were smaller and emerged more slowly than flies with a microbiome), germ-free larvae raised on blueberry or strawberry diets completely failed to emerge and died (see figure, right). This development defect could be rescued by single addition of several microbiome members, showing redundancy among microbiome members in providing nutritional needs to the host.

These studies give us insight into the microbiome’s role in nutrient acquisition in flies, which may allow scientists to extrapolate to other animals. The simpler microbiome and faster generation time of the fruit fly, relative to other model organisms such as the mouse, allows researchers to dissect specific roles for biosynthetic pathways or microbiome members. Together, these studies provide insight into the evolution of different Drosophila hosts and their specific microbiome functions, and show how different microbiome components provide nutrients to their host.