Scientific breakthroughs require new ideas. These new ideas often break previously held paradigms (remember when scientists thought proteins were the molecules of heredity?) and come from many places—not least of which is the next scientific generation. A new mSystems special issue, sponsored by the Janssen Human Microbiome Institute, highlights some of the innovative ways early-career scientists hope to bring systems microbiology into the future of medicine, agriculture, and basic research. The issue contains perspectives from young scientists, who highlight the major hurdles in their field and the possible solutions systems-based approaches offer.

“Too often the established dogma of the ‘late-career’ scientists can be hard to shift,” writes mSystems Editor-in-Chief Jack Gilbert in an opening editorial. Famous and well-established scientists are highlighted at conferences and in journal commentaries and have a lot invested in moving in the same direction, he argues. Early-career researchers are less constrained and were encouraged to submit their scientific visions on microbiome research. The perspectives touch on medical, agricultural and biotech research. Here, a brief summary of points made by these investigators.

Microbe-host interactions influence human health, metabolism and immune functions, but researchers need to use integrative approaches to understand these complex interactions. Casey Theriot suggests the use of ‘omic approaches to better define microbial functions, both in individual bacterial species and in the context of the microbiome community within the host. Theriot’s research has highlighted the importance of the gut microbiota in reducing resistance to Clostridium difficile, resulting in C. diff disease. Specifically, the metabolism of the aggregate microbiome, or metabolome, demonstrates that microbiome function can trump its structure, and Theriot suggests that understanding what microbes do can be more important than a categorical list of the microbial species in a microbiome. His work now focuses on microbial proteins that alter the gut bile acid pool, which influences the ability of C. difficile and other microbes to survive and maintain a niche. 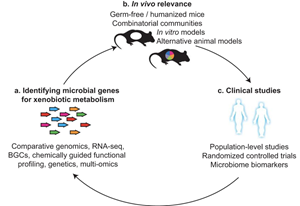 Three major barriers to the integration of metagenomics into pharmacology and toxicology. Source.

Differences in microbial metabolism can also affect drug pharmacokinetics and may explain patient-to-patient variation in drug responses, writes Peter Turnbaugh. His research centers on the hypothesis that the human microbiome contributes more to interindividual variations in drug bioavailability than do genetic differences between patients. He and others use transcriptional profiling and comparative genomics to identify bacterial genes involved in drug metabolism, and he stresses the importance of improved mouse models and randomized, controlled human patient trials to test hypotheses. Overcoming these barriers to discovery (see figure, right) will speed development of therapies that use microbiome biomarkers to tailor drugs and dosages for individual patients.

Catherine Lozupone also hopes tailored therapeutics may influence our microbial communities, but her work focuses on microbial interaction with the immune system. Luzopone cites many examples of microbial influence on immune cell differentiation and function, and highlights her work investigating the mechanisms by which microbes modulate host immunity in chronic inflammatory diseases. Using techniques like metabolic networking analyses and 16S rRNA gene sequencing, her group has identified zwitterionic polysaccharides (ZPS) as a bacterial cell envelope component that drive regulatory T cell function. Microbes that produce this component or purified ZPC may one day be useful as a potential anti-inflammatory therapy. She hopes that integrated multidisciplinary research projects with collaborators with complementary expertise will develop microbiome-targeted therapeutics.

Lozupone C.A. Unraveling Interactions between the Microbiome and the Host Immune System to Decipher Mechanisms of Disease. mSystems 3(2) March 2018.

A key challenge in microbiology will be developing tools for manipulating human gut bacterial communities, writes Lawrence David. Dowd's research focuses on developing methods in three research domains to manage the human gut microbiota. These include in vitro tools for high-throughput studies, techniques to overcome statistical challenges of microbiota modeling, and study designs to streamline human testing of microbiome manipulations. Together, David hopes these methods will be able to construct platforms for personalized microbiota treatments.

A limitation toward developing rational microbiome-based therapies is the ability to predict which bacterial strains have the potential to stably colonize a person. Tami Lieberman is applying system-level approaches to reconstruct the history of bacterial lineages within individuals to address this issue. Understanding how bacterial evolution occurs within the human body will help develop the tools for basic and translational discoveries. 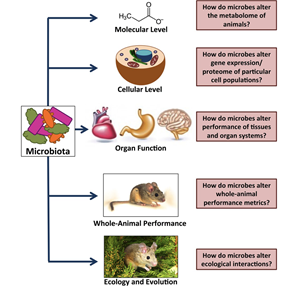 Numerous levels of biological organization can be affected by animal–microbe symbioses. Source.

Host-microbiome interactions vary between animal species, of course, and Kevin Kohl describes challenges in animal physiology that can be addressed by using multiple animal models to develop large, integrated data sets. Data on both animal hosts and their microbiome will lend insight into the influence of microbes on host animal physiology. Experiments involving germ-free animals or microbial transplants can be particularly enlightening, as Kohl has found while studying the role of gut microbes in herbivorous mammals. His research focuses not only on the function microbes play under conditions such as toxin ingestion or cold adaptation, but also on the the species specificity of host-microbe interactions in fitness selection.

Darwin referred to life as a struggle. Organisms compete for limited resources in nature, and their traits influence the outcome. Thomas Sharpton describes how understanding function of the gut microbiota can help determine its role in evolution.

Melissa Galey and Laura Sanchez also write about the crosstalk between the microbiome and its host organism. They highlight mass spectrometry and analytical chemistry approaches as ways to identify specialized metabolites that promote this crosstalk, citing the example of a mammalian epithelium-produced mimic of a bacterial quorum sensing signal. They stress the need for interdisciplinary teams of microbiologists, analytical chemists, and computer scientists to better understand how crosstalk signaling occurs and what its implications are. An example is the Sanchez research lab, where imaging mass spectrometry is combined with a transparent zebrafish model as a way to understand the role of bacterial signaling molecules during colonization and infection. The authors call on similar collaborations to better decipher the complex communication pathways between hosts and their microbes.

Specialized metabolites are used to communicate between microbes and hosts of all types, and a perspective from Eduardo Jorge Pilau and colleagues describes the importance of these metabolites in agriculture. The authors write that liquid chromatography-mass spectrometry (LC-MS), with its capacity for high-volume molecule detection, can generate inventories of metabolites produced under different conditions. Using LC-MS for metabolomic studies in livestock can identify biomarkers indicative of animal health or quality of animal products, such as milk. Similar metabolomics approaches are applicable to crops as well, an example being the authors’ research into using metabolomics data to detect soybean stress due to fungal infection. They state that microbe- or host-produced natural products, identified by multidisciplinary teams, can be used for improved agricultural health surveillance and production. 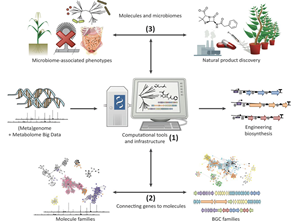 Natural products produced by microbes act as antibiotics, immunosuppressants, and chemotherapeutics, and Marnix Medema also uses mass spectrometry in metabolomics studies to identify key metabolites. Metagenomic sequencing and computational analysis pipelines can help define biosynthetic pathways that generate these products, but don’t identify which functional small molecules play key roles in a sea of metabolic byproducts. Investigations that combine genomic data with data from mass spectrometry characterization of small molecules are most likely to find the effector molecules that modulate biological processes. Identifying these molecules “will provide many new insights into the chemical language of life,” Medema states.

The humans gastrointestinal tract harbors a diverse, highly mutualistic microbial flora which could produce a myriad of specialized metabolites. These specialized metabolites are the chemical cell phones that gut microflora use to communicate within their human host and could potentially be used to cure diseases, as Qiang Lyu and Cheng-Chih Hsu write in their piece.

Microbiomes underpin biogeochemical processes and are thus frontline players in determining ecosystem responses to environmental change, writes Ashley Shade. By understanding the responses of complex microbiome communities to stresses associated with environmental change, scientists will be able to prepare for, respond to, and potentially moderate this change.

The  concentration of the potent greenhouse gas methane is rising  in the Earth's atmosphere. Cornelia Welte describes how recent systems microbiology approaches have led to innovations and discoveries in archaeal methane microbiology that are changing what we know about methane production.