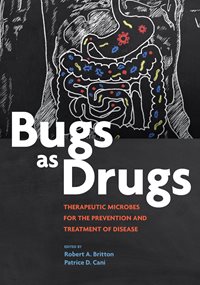 Bugs as Drugs: Therapeutic Microbes for the Prevention and Treatment of Disease

The human  microbiome contributes to human health or disease in many ways: through bacterial metabolism, microbial competition, and interaction with host cells. A new book from ASM Press, Bugs As Drugs, delves deeper into the idea that microbes themselves can be used or manipulated to promote human health. We had a few questions about this relatively nascent field, which Editors Robert A. Britton and Patrice D. Cani were happy to answer.

ASM: What was your motivation in writing “Bugs as Drugs?”

Britton: The idea of the book stemmed from a session at the 2014 ASM General meeting that I chaired that had the same title as the book. It was so well attended that it was clear there was a need to compile the current literature and future perspectives in the area of microbial therapeutics.


Cani: I have been working in the field of metabolism for more than 20 years. When I started to study the link between host and microbes in the early 2000’s, it was really hard to convince editors to publish our findings, such as the evidence that the bugs in our gut communicate with the brain to control food intake. Since publications of several seminal papers mid 2000’s, scientists in this field have now produced more than 16000 publications on PubMed! More than 75% of the publications have been published over the last 5 years. Amazing!

When Rob contacted me with the idea to co-edit the book, I was immediately enthusiastic about the idea of collecting the recent major breakthroughs from this field into a book. We began our fascinating adventure, and now we are proud to share the work of many colleagues and experts in the field with the rest of the scientific community.

ASM: Do you hope “Bugs as Drugs” readers will appreciate the beneficial role of microbes in human health?

Cani: I am personally convinced that we can use our gut as a medicine. What I mean is that the bugs in our gut may become future drugs! Who is not interested by taking care of their own health? Most of the readers are expecting clear and scientifically validated information, which is what we offer with this book: an accessible but scientific tool. The book highlights novel, key, and next-generation beneficial microbes.

Britton: Over the past decade there has been a paradigm shift in how we think about microbes, both scientifically and socially. Bacteria are no longer only considered agents of infection yet are not appreciated as contributing positively to human health. A common theme throughout the book is that messing with the microbial communities associated with your body can contribute to disease. Hopefully readers of this book will contribute future microbiome-based therapies to treat human disease.

ASM: How does the book address both clinical applications and basic research discoveries?

Britton: The microbiome field is still in the investigatory phase in attempting to understand how our microbial communities participate in health and disease. Readers will find many chapters focus on key findings in several different diseases with a strong microbiome component, along with potential future therapies that will emerge from the microbiome.

Cani: By inviting worldwide top experts who are in specialists in their fields, we’ve combined both basic science with many fascinating examples of bugs isolated from the human gut, or other sources, that may become future beneficial microbes. In other words, a nice balance of chapters going from the bench to the bedside.

ASM: Several of the topics covered in different section, such as microbial control of disease or next generation microbial therapies, seem like they could be the entire subject of a textbook. Why did you think it important to combine these subjects with others in one comprehensive book?

Cani: This is completely true, we could have written pages and books on only one of these topics! The magic of this book is that it contains exhaustive sections on many topics without becoming long, difficult, or “tedious” for the readers. All the contributing authors deserve thanks for their wonderful contributions, which were vital to the book’s depth and breadth.

Britton: One objective of the book is to educate readers that are new to the field. Thus we included key concepts that need to be considered when approaching the role of the microbiome in human disease and how to translate microbiome based therapeutics into the clinic. Since this is such a new field, I would hope a future edition of the book (or new book altogether) will delve deeper into these topics as more information emerges.

ASM: Your personal research focuses on the role of intestinal bacteria in health and disease. Was there a section of the book you were particularly excited to see published?

Britton: I really don’t have a particular aspect of the book that was more important to me than any other. I’m just grateful to all of the authors that contributed their time and effort to the book.

Cani: I am personally excited by the novel bacteria and, of course, by the potential benefits that they may provide. Just imagine for a second that each of us are living with many microbes, many that we have never isolated or even identified! In this book, I really like the idea that we can isolate new microbes, understand how they work in concert with us, and even more importantly, how they can produce future drugs. Fascinating, isn’t it? 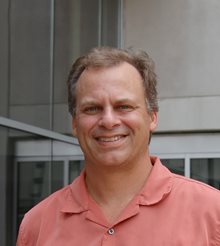 ASM: The microbiome is mentioned in many sections, but the preface emphasizes the early stages of this field, particularly in associating microbiome with specific medical disorders. How does the book address treatments for maintaining health without overemphasizing preliminary studies?

Britton: This is one of the most important challenges facing microbiome research: how do we move from association to causation such that real advances in therapeutics can be made. In some diseases we are much closer than others in this area. The chapters are not necessarily meant to suggest specific microbial based treatments for each disease but are attempting to show where each field is currently and how therapeutics may emerge.

ASM: What is the take-home message you hope readers get from the book?

Cani: In Gut We Trust.

Britton: Be nice to your bacteria. They have been nice to you for a long time. You just didn’t know it.

Read the Bugs as Drugs preface from Britton and Cani.