Is It Really about the MIC? 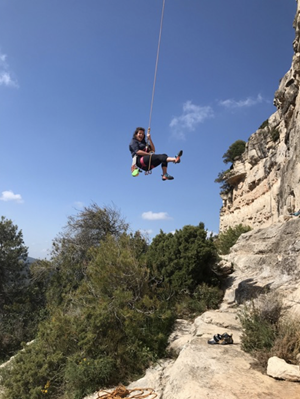 I love Spain. It's home to spectacular rock climbing, shoe shopping, fish-bowl-sized gin and tonics...When in Spain in April, before the European Congress of Clinical Microbiology and Infectious Diseases (ECCMID), I spent a week rock climbing in Siurana. One night, defeated and exhausted, my husband and I went to watch Dave Graham, one of the world's best rock climbers, attempt a route called "La Rambla," graded 5.15a (aka, really, really hard). Here is a guy who is at the top of his game. He has been working the climb for over 10 years, with no success. Time and time again, he nearly reaches the summit, only to have his fingers pop off the dime-edge grip at the top, hurtling 20 or so feet in a free fall until his rope catches him. Can you imagine climbing the same 60-foot expanse of rock hundreds of timesâ€”attempting to achieve the near impossible? (His partner seemed to be a bit done with it--her dispassionate "Allez, Dave, allez" was my favorite part).

On April 21st, at the ECCMID meeting, David Paterson dropped the MIC on ESBLs. (Did you see what I did there? Microbiology pun!)

The use of piperacillin-tazobactam (and other beta-lactamase combination agents--BLCs, for laziness' sake) to treat extended-spectrum beta-lactamase (ESBL)-producing isolates has always been somewhat controversial. Some (the pharmacokinetic/pharmacodynamic mafia) cheerfully assert that MICs trump resistance mechanisms. Others, however, have expressed concern about using beta-lactam combination agents to treat ESBL-producing isolates.

The challenge, of course, is the scarcity of clinical data to support either viewpoint. From a purely microbiological perspective, we know that ESBLs, by definition, are inhibited by beta-lactamase inhibitors like tazobactam. However, some (rather infrequently encountered) beta-lactamases are resistant to the activity of these inhibitors, like the inhibitor-resistant TEMs. While these should test resistant to piperacillin-tazobactam, they don't always! There is also a theoretical concern that in infections with a high burden of bacteria, the inoculum effect may overwhelm the beta-lactamase inhibitor, allowing hydrolysis of the sort of wimpy piperacillin beta-lactam "business" component of the combination. This effect has been described in vitro and is supported by data that show improved outcomes for patients with E. coli or Klebsiella bloodstream infections treated with a BLC if the source of bacteremia is urinary or biliary (both low-burden infection sites).

Despite these concerns, some observational studies found BLC agents were not inferior to carbapenems for the treatment of serious infections caused by ESBL-expressing Escherichia coli and Klebsiella spp. (For the smarty-pants readers, Klebsiella spp. excludes Klebsiella aerogenes, which is still an Enterobacter in my book). One can postulate that the patients in those studies weren't as sick, or that the BLC MICs were lower, or that the source of infection was urine (so who cares), or that the effect is less pronounced for E. coli versus Klebsiella spp (no, not aerogenes), but ultimately, the waters are murky, to say the least. Wouldn't a randomized, controlled trial be awesome?

Enter the MERINO trial, which compared meropenem to piperacillin-tazobactam for definitive treatment of bloodstream infections caused by ceftriaxone-resistant Escherichia coli and Klebsiella spp. (not K. aerogenes). In this study, participants were randomized within 72 hours of the initial blood culture collection to piperacillin-tazobactam (4.5g q6h) or meropenem (1g q8h) for a minimum of 4 days. Ultimately, 379 patients were randomized appropriately and received a least 1 dose of study drug (i.e., modified intention to treat population). Most infections were health care-associated, of urinary tract origin and caused by E. coli. Twelve percent of patients randomized to the piperacillin-tazobactam arm met the primary outcome of mortality at 30 days, versus 3.7% in the meropenem arm. The risk difference for mortality at 30 days was 8.6% (95% confidence interval 3.4-14.5%) Soâ€¦ done (MIC dropped). Piperacillin-tazobactam is actually inferior to meropenem for these serious infections. Yes, even if the source is urine, even if the organism is E. coli, and even if the MIC is susceptible.

I'll be the first to say, on behalf of all labs that diligently follow CLSI guidelines, which purport that ESBL testing is only needed for epidemiological purposes, "Come on! We just got rid of our ESBL test! Do we have to dust off the disks (and IQCPs and competencies?) to humbly return to ESBL testing?"

Not necessarily. If you look closely at the MERINO trial, it's actually a study of third-generation cephalosporin nonsusceptible isolates, as defined by EUCAST breakpoints. Thus, one approach could be to generate a rule whereby piperacillin-tazobactam is reported as "resistant" (or the result is suppressed, or the lab adds an "expert" comment re: risk of treatment failures) when a third-generation cephalosporin is resistant. Is it perfect? No--not all ESBL producers will be resistant to each individual cephalosporin, a particular problem if a laboratory only tests 1 or 2 cephalosporins routinely. But nothing in life is, including the ESBL test.

So, why not return to ESBL testing? I think it's useful to reflect on why CLSI first endorsed the ESBL test, and why we ultimately got rid of it. When ESBLs first emerged, some isolates that expressed these enzymes tested susceptible to cephalosporins by the pre-2010 breakpoints. This raised concerns about clinical outcomes, and to bridge the gap, CLSI developed the ESBL screen--and confirmatory tests--for E. coli, Klebsiella spp. (not K. aerogenes, which was still an Enterobacter back then), and later P. mirabilis. When an ESBL was confirmed, the laboratory was instructed to edit the results of cephalosporins and aztreonam to resistant. To be clear, CLSI never recommended reporting piperacillin-tazobactam as resistant if an ESBL was detected, although many laboratories added this additional step.

The challenge with this approach was that roughly half of Enterobacteriaceae that express an ESBL are not E. coli, Klebsiella or P. mirabilis. Also, if an AmpC was coexpressed by an isolate, it could mask the ESBL, yielding a false-negative ESBL test. From a clinical perspective, animal data from Andes and Craig clearly demonstrated that the PK-PD relationships for cephalosporin efficacy are dependent on MIC and not whether the isolate expressed an ESBL or not. These factors, combined with data to support the 2010 breakpoints, led to CLSI eliminating ESBL testing for clinical purposes and revising breakpoints. Now, if a center decides to continue (or return to) ESBL testing, itâ€™s critical to emphasize that this should be done in conjunction with applying the 2010 cephalosporin/aztreonam breakpoints, as these best predict treatment outcome.

I think it's inspiring, as Dave Graham  says, to "rise above preconceptions and try, 'A muerte, Sin Perdon'" to achieve something near impossible. Like his efforts to conquer La Rambla, I don't think the story on BLCs for the treatment of ESBL-producing isolates is finished. There will be continued debate on their utility for urinary tract infections. The validity of current piperacillin-tazobactam breakpoints is being questioned. And, as newer BLCs come to market, the value of these as carbapenem-sparing regimens for ESBLs will need to be assessed. Will we get the answer right the first time? Probably not. The second? Perhaps not as well. But as long as we persevere, we are on the right path.