Lyme disease may be the infectious disease that has generated the most controversy. It earned its name from the towns of Lyme and Old Lyme, Connecticut, where some local parents whose families were affected by the then- unknown disease reached out to the medical establishment for help. The early epidemiological evaluation (1976) noted that there was indeed something unusual going on—many children and some adults had developed arthritis, some also with neurological symptoms, and about a quarter had a unique skin rash. Symptoms typically started in the late summer or fall, and residents near heavily wooded areas were more likely to be affected than those near urban centers. Later work (1982) by Willy Burgdorfer at the NIH Rocky Mountain Lab facility discovered the tickborne etiologic agent of Lyme disease in North America—a Borrelia spirochete eventually named Borrelia burgdorferi.

I’m not going to discuss treatment options, other than to mention that Lyme disease detected, or suspected, early and treated per conventional medical recommendations leads to resolution of symptoms and disease for the vast majority of patients. The Infectious Diseases Society of America (IDSA) treatment guidelines from 2006 provide details on treatment options and the evidence of their efficacy (updated guidelines are in the works).

Now for the tests. If a patient presents with erythema migrans (the characteristic bullseye rash, see right), lab testing isn’t necessary to justify starting treatment; in fact, serologies will still be negative in the majority of patients at this stage. Diagnostic testing options have included culture (very slow and insensitive), and PCR (for synovial fluid from patients with Lyme arthritis, or cerebrospinal fluid (CSF) from patients with Lyme neuroborreliosis). There are no FDA-cleared PCR assays, however, and evaluations of laboratory developed PCR assays to diagnose Lyme disease using blood, or plasma, or using CSF in neuroborreliosis, indicate poor sensitivity (33.8% to 62% for blood/plasma in early disease, even lower for CSF) according to a recent review of Lyme testing methods. 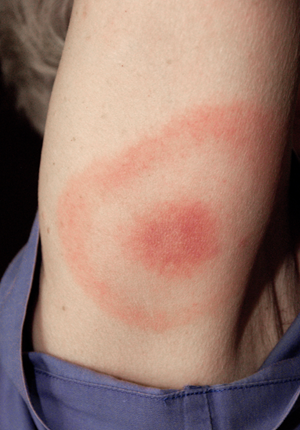 The most utilized method of Lyme testing is serologic tests to determine if antibodies to Borrelia antigens are present. There is considerable variability in this latter group of tests, which includes primarily enzyme-linked immunosorbent assays (ELISA) or indirect fluorescence antibody tests and western blots to determine the presence of host antibodies reactive to either whole-cell sonicates (WCS) of cultured B. burgdorferi, or specific antigens of B. burgdorferi (such as VlsE or the C6 peptide). Serologic tests using B. burgdorferi WCS have modestly higher sensitivity than tests with specific antigens (89% for WCS versus 81% for C6 for all patients in a recent study using well-characterized patient sera, but 73% for WCS versus 58% for C6 for patients with early disease), but this comes with considerably poorer specificity (32% of negative controls reactive for a WCS assay, versus 3% for C6, see table 1 of this recent publication). A WCS assay can still be an effective screening component of a two-step algorithm.

The Centers for Disease Control and Prevention (CDC)-recommended testing strategy is still to use a two-step testing algorithm—screening with an ELISA test, and reflexing positive or equivocal results to western blot tests. Many clinical labs have or are considering abandoning the western blot, however, to use instead a 2-step algorithm using 2 ELISA tests, which yields improved sensitivity in early Lyme disease relative to reflex to western blot (61 percent versus 48 percent) without sacrificing specificity (99.5 percent). Sensitivity of these testing methods in late Lyme disease is essentially 100 percent.

Thankfully, there is hope that a new wave of tests is coming that may improve sensitivity for early stages of Lyme (without ignoring specificity) which may possibly allow the field to replace 2-tiered testing with a single test. Additionally, some of the newer tests are better able to detect species of Borrelia other than B. burgdorferi sensu strictu, including those that are common in Europe. A recent review article looks to the horizon of Lyme testing.

We have tests backed by solid evidence, and a hopeful future, but there is also a parallel universe of Lyme testing. A great deal of diagnostic testing occurs at commercial laboratories that specialize in Lyme testing (or sometimes for a variety of tick-borne infectious diseases). The tests offered at these labs are typically not subjected to the type of rigorous technical comparison to established methods that would be required for submission to regulatory agencies such as the Food and Drug Administration (FDA).

Proponents for such testing typically decry the lack of sensitivity of established methods, an acknowledged weakness in early disease (see above), and suggest that there is improved sensitivity available with specialty lab tests. The catch is that sensitivity isn’t the whole story, and any test (or alternative interpretation of a test, note the difference western blot results seen here) that produces a lot more positives (such as the false positives observed in this study) could have an artificially inflated sensitivity (and poor specificity).

What could motivate the use of these controversial tests? A prominent story line among the alternative Lyme community is that the medical establishment and big pharmaceutical and biotech companies are conspiring to produce guidelines and testing methods that suit the collective interests, financial and otherwise. The Infectious Diseases Society of America (IDSA) even produced a video rebutting such claims. The drugs recommended by IDSA and other establishment groups are inexpensive. Lyme testing is a virtually negligible component of the budget of traditional clinical labs. It may be that there should be more concern regarding financial special interests for companies performing unregulated and often cash-only (not covered by insurance) Lyme tests and Lyme disease specialising (“Lyme-literate”) physicians that depend to a large extent on the controversy for business. It is important, however, to cut through the misinformation and hard feelings and find the best way to help patients by improving tests, proving their utility and using new ways to engage in productive education and outreach. The potential long-term consequences of untreated Lyme disease make diagnosis important, but sensitive and specific tests are necessary for accuracy.

Author’s Note: My opinions are my own, not those of ASM or my employer. I have no financial interests in any companies related to infectious diseases or diagnostic testing.