Hopefully you didn’t forget that Mother’s Day was last weekend! As you shopped for flowers and gifts to celebrate the moms in your life, you should have also thanked your mother for sharing her microbes with you. After all, your mom helped create the “first draft” of your microbiome, the community of beneficial microorganisms that live on and inside of your body. Without your microbiome, you would be unable to synthesize many important vitamins, amino acids, and enzymatic cofactors that help you to digest and absorb foods and you could become more susceptible to infections. The microbiome makes up 1-3% of your body mass, contains approximately 3 x 1013 bacteria, and plays a diverse, yet not fully understood, role in regulating metabolic and immune health. A wealth of recent evidence also suggests that the microbiome plays a very significant role in the development and progression of many different diseases, from diabetes to HIV.

Your First Microbes are Very Important

Dr. Martin Blaser, a physician, the director of the NYU Human Microbiome Program, and author of the book “Missing Microbes,” has specifically described the importance of the microbiome during infancy and early childhood. In an interview with NPR, he states, “There's a normal developmental cycle of the microbiome from birth over the first few years of life. Especially the first three years appear to be the most important.” While infants may not be sterile in the womb, as some suggest that the placenta contains microorganisms, they receive a large inoculum of the mother’s commensal microbes during birth. Blaser adds, “The big moment of truth is when the membranes rupture, the water breaks, and the baby starts coming out. And that's where they first get exposed to the bacteria of the world.”

Like a newborn baby, the microbiome matures over time, and the initial colonization during the birthing process sets the stage for the development of the adult microbiome, which usually stays with you for life. The adult microbiome has a stable composition that is difficult to alter without significant intervention, such as antibiotic therapy combined with a change in diet and/or geographic location, or daily supplementation of probiotic bacteria, so microbiome development in infants is critical. The first species present in the infant microbiome are like fertilizers that help to create an optimal  habitat for favorable commensals to grow. They use specific enzymes that deplete oxygen to foster an anaerobic environment, which is best suited for their growth. They are also thought to play a role in educating the immune system and establishing mucosal immunity. 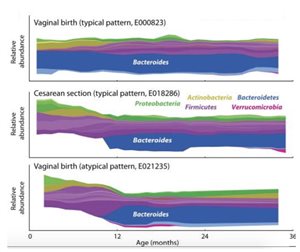 Across the world, many newborns are delivered using medical interventions like Cesarean sections. Such interventions can affect the initial colonization process and may modulate the bacterial composition of the infant intestinal microbiome (Figure 1). Cesarean sections can produce an infant microbiome that harbors low levels of Bacteriodes through 6-18 months in age. The 6-18 month period in infant development marks a period of dynamic change within the microbiome, as infant diets shift from breast milk or formula to solid foods.

Bacteroides are generally regarded as beneficial members of the microbiota. These gram negative anaerobes and common gut commensals can help break down plant material in the colon. They also help to establish an anaerobic environment inside the gut, which also supports the growth of other beneficial commensals. As is true of many gut microbes, they can cause disease when found outside of the gut. One publication states that the common real estate adage, “location, location, location,” also applies to Bacteroides, which can be beneficial or pathogenic depending on the body site in which it is found.

While we have not yet discovered the exact recipe that makes up a healthy microbiome, Yossour and colleagues propose that the low-Bacteroides signature in neonates is correlated with a less-diverse intestinal microbiota at 36 months of age. This lack of diversity within the microbiome may be linked to disease, since the mucosal immune system had only been exposed to a limited number of antigens. Many diseases within the mucosal barriers that alter mucosal permeability, including inflammatory bowel disease and type I and type II diabetes, may be triggered by a lack of microbial diversity. A lack of diversity limits the key enzymatic and detoxifying functions of the microbiome and creates space for pathogens to take over, which can cause significant inflammation within the mucosa.

Antibiotics Can Cause Long-Term Change

For moms, it’s important to stay healthy and to prevent bacterial infection during pregnancy and prior to delivery, as antibiotic usage can affect the unborn baby’s microbiome. When mothers take antibiotics before delivery, or when infants receive antibiotics in the first two years of life, there are sustained effects on the infant microbiota, with potential effects on long-term health outcomes.

For mothers that use antibiotics prior to delivery, the normal oral microbiome of neonates is disturbed by the expansion of Proteobacteria, which decreases the numbers of Lactobacillales, Streptococcaceae, and Gemellaceae. Members of the genus Lactobacillus, which are part of the order Lactobacillales, help to break down milk proteins present in breast milk and aids the baby’s digestion. Better digestion means more much needed sleep for mom! Similarly, recent evidence has shown that Lactobacillus reuteri, a probiotic that can be found in the gut microbiome and in breast milk, can help to alleviate the insomnia-producing symptoms of colic. 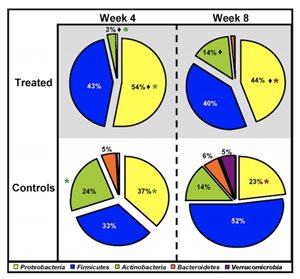 Fouhy and colleagues found that infants who received IV antibiotic treatment had different microbial compositions from those who were not exposed to antibiotics. Compared to untreated controls, infants treated with antibiotics had less Actinobacteria, Verrucomicrobia, Bacteroides and increased Proteobacteria within their gut microbiomes (Figure 2).

The number and diversity of a specific actinobacterial species, Bifidobacterium, were reduced after antibiotic treatment and replaced by an expansion of Enterobacteriaceae, which bear the potential to become pathogenic under certain environmental conditions and are generally not regarded as probiotic organisms. Similarly, Lactobacillus, a member of Firmicutes, was also depleted by antibiotic treatment and replaced by Enterobacteriaceae. For context, you might see Bifidobacterium and Lactobacillus species in your yogurt or in the probiotic supplement aisle, but you will probably never see Enterobacteriaceae in your yogurt--and if you do, throw it out!

Though you can’t see them, the microbes that your mother provided you with at birth have worked hard to create a stable community of organisms within your gut that have played a role in priming your immune system and digestive system. As you pick out the perfect flowers that say “I love you,” to mom, be sure to also nurture the tireless, industrious microbes within your gut by quitting smoking, reducing stress, getting enough sleep, and only taking antibiotics when necessary.

Rita Algorri is a freelance writer, Ph.D. candidate in Clinical and Experimental Therapeutics, and Master's student in Regulatory Science at the University of Southern California.