The Origin of Eukaryotes: Where Science and Pop Culture Collide

How did eukaryotic life evolve? Here, one of the most controversial and puzzling questions in evolutionary history meets Star Wars and the Marvel Universe.

Figure 1. A eukaryotic cell contains membrane bound organelles, such as the nucleus and mitochondrion. Source.

How did eukaryotic life evolve? This is one of the most controversial and puzzling questions in evolutionary history. Life began as single-celled, independent organisms that evolved into cells containing membrane-bound, specialized structures known as organelles (Figure 1). What’s clear is that this new type of cell, the eukaryote, is more complex than its predecessors. What’s unclear is how these changes took place.

In 1905, the Russian botanist Konstantin Mereschkowski first proposed symbiogenesis, or endosymbiotic theory. This theory states that organelles, which distinguish eukaryotes from prokaryotes, emerged though a mutually beneficial relationship between individual prokaryotes. The association of two prokaryotes eventually resulted in the engulfment of one prokaryote by the other, giving rise to organelles such as mitochondria and plastids (Figure 2). 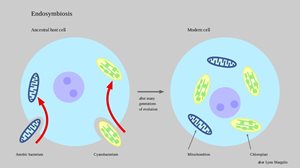 There have been many iterations of endosymbiotic theory over the past century, but the theory hasn’t remained solely in the academic realm. Pop culture has adapted the endosymbiotic theory to explain its own origin stories, and in turn, science has incorporated elements of mythology and pop culture into its own stories.

If you are a Star Wars fan, you are probably familiar with the Force, an energy that moves through all living things and that can be used for either good or evil. From the earliest Star Wars movies, we learned that some characters can feel the Force more than others. But it wasn’t until that infamous scene in The Phantom Menace that we learned why. In The Phantom Menace, George Lucas introduces the midi-chlorians—microscopic lifeforms that reside within almost all living cells and communicate with the Force. We learn that characters with a high midi-chlorian count can feel and use the Force.

Sure enough, Lucas bases the midi-chlorians on the endosymbiotic theory. “Midi-chlorian are a loose depiction of mitochondria,” he said in a press conference on The Phantom Menace. “And it's really a way of saying we have hundreds of little creatures who live on us, and without them, we all would die. There wouldn't be any life. They are necessary for us; we are necessary for them.”

While many fans regard the midi-chlorian as the worst part of Star Wars, a group of microbiologists at the University of Milan felt differently. When Nate Lo and colleagues discovered a new species of tick-infecting bacterium, it needed a new name. In his search for inspiration, Lo stumbled upon a Wikipedia page describing midi-chlorians and knew he was onto something. Because the bacterium that they found resides in the mitochondria of tick ovarian cells, a play on “midi-chlorians” seemed like a perfect fit, and so the Midichloria genus emerged.

Prior to this, the lab had collected 158 ticks from infested goats, infested ruminants, or from tick dragging exercises between 1997 and 2001. Lo was searching for human pathogens within the tick Ixodes ricinus, a vector for Lyme disease, and found this novel bacterium using 16S rRNA sequencing. The bacterium seems to represent a novel clade of Alphaproteobacteria and they named the bacterium Candidatus Midichloria mitochondrii. But unlike Star Wars’ midi-chlorians, which represent mitochondria, Midichloria bacteria invade and consume the mitochondria from the inside, fueling bacterial cell division. What’s left is an empty vacuous sac full of bacteria.

“As far as we know, it's the first species to be formally named after anything in the entertainment industry," Lo told The Scientist. "There's plenty of science in Star Wars, but not enough Star Wars in science, as far as I'm concerned.” (Perhaps Lo’s statement inspired the anonymous science blogger Neuroskeptic to fool four predatory journals into publishing work on midi-chlorians.)

Now, let’s leave the world of Star Wars and journey to the planet called Asgard, one of the Nine Worlds in Norse mythology and home to Norse gods such as Thor and Loki. We have seen these characters in their own movie franchise as part of the Marvel universe. Asgard also happens to be the name of a proposed superphylum of uncultivated archaea. The Asgard superphylum was discovered in 2010, when researchers found a wealth of novel archaeal lineages in a gravity core taken near a hydrothermal vent named Loki’s Castle, located on the Mid-Atlantic Ridge between Greenland and Norway (Figure 3). This lineage was later named the Lokiarchaeota. The Asgard superphylum also includes the Thorarchaeota, Odinarchaeota and Heimdallarchaeota. 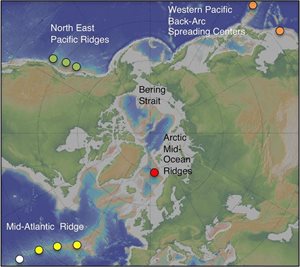 Figure 3. Lokiarchaeota was identified in in the Mid-Atlantic Ridge between Greenland and Norway (red dot). Source.

Though the Lokiarchaeota were named after Loki’s Castle, the name has a deeper meaning. In Norse mythology, Loki is the god of mischief, a trickster and a shapeshifter. In literature, Loki has been described as “a staggeringly complex, confusing and ambivalent figure who has been the catalyst of countless unresolved scholarly controversies.” This portrayal is a perfect characterization of the Lokiarchaeota and the Asgard superphylum in the evolution of eukaryotes.

One of the central questions in endosymbiont theory is: what microbe plays the engulfer? Based on phylogenetic analysis, scientists have thought that the origins of eukaryotes involved an archaeon engulfing a smaller bacterium. There are over 20 proposed versions of endosymbiont theory, and scientists have debated long and hard on which archaeal species is the engulfer. The TACK superphylum (which includes the Thaumarchaeota, Aigarchaeota, Crenarchaeota and Korarchaeota) has been the most commonly accepted archaeal parent to the eukaryote until the Asgard superphylum entered the scene.

In a paper published in Nature, the Asgard superphylum has been proposed as the archaeal host for the engulfed alphaproteobacteria. The genomes of Asgard archaea were rich in genes for proteins formerly considered specific to eukaryotes. For example, Thorarchaeal genomes encode several homologs of eukaryotic membrane-trafficking machinery components and proteins similar to eukaryotic coat proteins involved in vesicle biogenesis.

The Asgard superphylum seems to be the closest thing we have to the eukaryote precursor, though we may stumble upon other archaea that more resemble eukaryotes. Over the years, the origin of eukaryotes has been rewritten several times as scientists encounter new species or develop new tools for genome analysis. The origins of eukaryotes have always been, and may always be elusive. 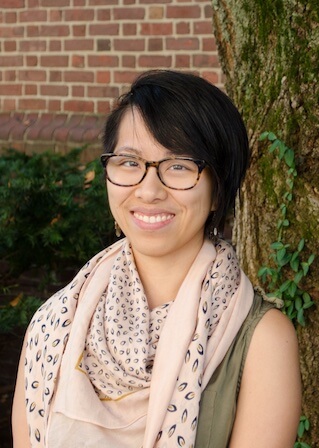