A Bacterial Compound May Fight an Important Crop Fungus

Share This
Rice is one of the most important staple crops worldwide and provides 27% of the world’s dietary energy supply. To increase farming yields without increasing the need for fresh water, Chinese scientists have adapted several types of rice that can be grown in seawater. Unfortunately, salt water does not dissuade plant pathogens like the fungus Magnaporthe grisea from damaging crops, but a newly identified compound from a marine Bacillus subtilis isolate may be able to control fungal infection in the seawater-grown plants. The antifungal activity of the compound is characterized in a new Applied and Environmental Microbiology report.

Rice blast disease caused by M. grisea infection can result in major crop damage, causing economic loss and affecting production of a food staple needed to feed half the world’s population. To search for a biological way to control infection, first author Linlin Zhang and senior author Chaomin Sun screened more than 400 marine bacteria for inhibition of M. grisea growth, identifying B. subtilis strain BS155 as the most inhibitory for fungal growth. 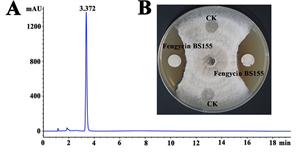 The source of inhibition was tracked to a secreted molecule in the fengycin family. Fengycins are cyclic lipopeptides with broad inhibitory activity against a number of filamentous fungi, and purified fengycins from BS155, identified by mass spectrometry, were confirmed to cause M. grisea inhibition (see figure, right).

How do these fengycins, called collectively the BS155 fengycin by the researchers, inhibit fungal growth? Microscopic examination revealed fungal structural abnormalities in the presence of BS155 fengycin, which led the researchers to hypothesize that the compound damaged the cytoplasm, the cell and plasma membranes, leading to loss of cell integrity. Using microscopy and expression studies, the research team showed that treatment of M. grisea with fengycin B155 induces the release of reactive oxygen species, the condensation of chromatin and inhibition of mitochondrial function, eventually leading to fungal cell death.

Using B. subtilis strains that produce fengycins and other antifungal compounds as a means of biocontrol has been suggested for protecting other crop species from fungal phytopathogens. Strains that naturally produce high concentrations of antifungal compounds may be especially important in organic farming, which cannot use industrial antifungal compounds on crops. Using a microbe to combat fungal infection may help farmers and gardeners alike by promoting healthy bacterial-plant interactions while maintaining a small ecological footprint on the surrounding microbial communities.
Share This