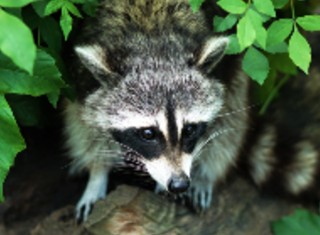 Raccoons have a decidedly ambiguous reputation among their human neighbors. The animals are notorious for breaking into even well-sealed trash cans and enjoying a disastrously messy meal from the contents, yet their dousing behavior, in which they rub food from a stream in water to examine it, has given them a reputation (inaccurate though it may be) for a strangely humanoid fastidiousness. They’re resented when they move into an attic, ripping off shingles, destroying air ducts, and shredding insulation in the process, but they’re also frequently portrayed as adorable cartoon friends and even lovable chocolate rascals (Figure 1).

In reality, there is truth to both views of raccoons – they are intelligent, remarkably dexterous creatures capable of opening jars and remembering complex tasks, but they can also be problematic and even dangerous pests. While most unpleasant interactions with raccoons involve property damage of one kind or another, direct or indirect raccoon contact can very rarely result in deadly neurological infection.

Like unscrewing jars and opening trash can lids, raccoon toileting is the kind of complex, skilled behavior that is fascinating to read about from afar and less fascinating to encounter in reality. Raccoons establish communal defecation sites known as latrines, often at the base of a tree or on top of a tree stump or rock. Apart from being generally icky, these latrines can pose a danger to small children who may consume raccoon feces or feces-contaminated dirt or debris while playing outside. This exposure can lead to transmission of disease, since raccoon feces often contain eggs of the raccoon roundworm, Baylisascaris procyonis.

When a human host ingests the eggs, larvae are released and penetrate the gut wall, entering the bloodstream and migrating throughout various tissues, including the liver, heart, lungs, and eyes. In these organs they cause visceral larva migrans and ocular larva migrans syndromes similar to those caused by Toxocara species. However, the most feared complication of B. procyonis infection is migration of the larvae to the central nervous system, where they can cause an eosinophilic meningoencephalitis that often results in permanent severe neurological sequelae or death (neural larva migrans).

Treatment with the antihelminthic agent albendazole in combination with corticosteroids may be helpful as post-exposure prophylaxis if administered promptly after recognized ingestion of raccoon feces, but its efficacy in patients in whom the parasite has already started to cause disease is likely lower. Fortunately, B. procyonis meningoencephalitis seems to be extremely rare, with fewer than 30 cases reported, most of these in children under 2 years of age.


Neural larva migrans caused by B. procyonis is usually suspected on the basis of a compatible clinical and exposure history and consistent neuroimaging findings. Definitive diagnosis based on identification of larvae in tissue (e.g. from a brain biopsy or autopsy; Figure 2), is often not possible, but serological testing of blood and CSF is offered by the Centers for Disease Control and Prevention and can confirm the diagnosis in the setting of a consistent clinical presentation. A clinician who suspects B. procyonis disease in a patient and wishes to pursue serological testing must contact the CDC’s parasite subject matter experts, who are available around the clock for assistance with the diagnosis and management of potentially life-threatening parasitic infections, to discuss the patient’s presentation and exposure history. If the expert agrees that the clinical picture is consistent with possible B. procyonis infection, they will request serum and CSF samples be submitted for serology.

Rabies, another rare but devastating neurological disease that can be transmitted by raccoons, is as famous as Baylisascaris is obscure. Rabies is a single-stranded RNA virus that is transmitted by contact with the saliva of an infected animal, which may occur directly through a bite or by contamination of a scratch or wound with the animal’s saliva. In the United States, where aggressive vaccination programs for pets have been in effect for decades, wild animals account for over 90% of rabies cases. Raccoons have represented the greatest number of reported rabies cases in the United States for most of the last 3 decades, although this number has been declining since the early 1990s. The decline may be in part a result of oral rabies vaccine programs that target raccoons with vaccine-containing bait, which have shown success in preventing the westward spread of rabies in raccoons, which is primarily found in raccoon populations on the east coast of the United States.

Human cases of rabies are extremely rare in the United States, with only a few cases reported each year. In 2015, for example, 3 human cases were reported: one patient acquired rabies from a dog bite sustained while visiting the Philippines, one from contact with a bat in Wyoming, and one from a mongoose in Puerto Rico. Although the disease is extremely rare in the United States, it is a major international health concern, causing an estimated 59,000 cases worldwide each year, mostly as a result of dog bites in areas where dog rabies remains common – and the disease is almost universally fatal.

Prevention of rabies in humans relies upon a combination of animal vaccination and prompt administration of post-exposure prophylaxis (PEP) to people who are bitten or scratched by a potentially rabid animal. Rabies PEP includes wound care, administration of rabies vaccination and, for people who have not previously received rabies vaccine, passive immunization with human rabies immune globulin as well. Although some exposures always warrant PEP (e.g. a bat bite), in cases of uncertainty state public health laboratories can assist doctors in determining whether PEP is indicated following a specific exposure based on the prevalence of rabies in different animals in the area.

The diagnostic testing approach for rabies is different in animals and humans. Animals suspected of having rabies (including wild animals who have been capture after biting a human) are almost always euthanized for testing, although pets with a low risk of rabies may be quarantined and observed for symptoms of rabies following a bite in order to avoid euthanasia. Testing of euthanized animals involves a direct fluorescent antibody test (Figure 3) for rabies antigens in brain tissue, which is performed at state public health laboratories. If the test is negative, then the person who was exposed to the animal generally does not need to undergo PEP. If a human is suspected of having rabies, a battery of diagnostic tests are undertaken, which may include PCR from saliva or skin biopsies, antibody testing from serum and cerebrospinal fluid, and immunohistochemical detection of rabies antigen in cutaneous nerves found at the base of hair follicles in skin biopsies taken from the nape of the neck. This testing is performed at, and in close consultation with, the state public health laboratory, with involvement from the CDC if needed.

Because treatment options are extraordinarily limited for both rare neurological diseases transmitted by raccoons in the United States, prevention is essential. Avoiding contact with raccoons and their latrines is the simplest and most effective preventive measure. Sometimes, however, contact may occur, especially given raccoons’ willingness to live near human habitations, and in these cases prompt medical evaluation and, depending on the nature of exposure, appropriate post-exposure prophylaxis, is critical. Almost all diagnostic testing for Baylisascaris procyonis and rabies is performed at state public health laboratories and/or the CDC, and discussion with experts at these sites can help clinicians determine what testing, PEP, and treatment may be indicated.

Raccoons are intelligent animals with interesting dining and defecating behavior that are best observed from a generous distance. Anyone who is bitten or scratched by a raccoon, or who may have inadvertently consumed raccoon feces, should seek medical attention immediately. If you’re a doctor from whom medical attention is being sought following a raccoon exposure, or a lab being contacted about diagnostic testing, remember: your state public health lab and the CDC are the best sources of information about workup and management of raccoon-associated zoonotic infections.

Learn more about diseases passed between animals and people in Zoonoses: Infectious Diseases Transmissible From Animals and Humans, 4th. Ed.
Share This