Current discussions on the microbiome might make you think that the concept of microbiomes is a relatively recent discovery. However, despite the new and predominantly medical attention, the concept actually has its roots in the early days of microbial ecology. A popular assumption is that Nobel Laureate and Microbiologist, Joshua Lederberg, first coined the term "microbiome" in 2001. This has led to debates over when and how the term "microbiome" is appropriate.

One argument is that because the word microbiome is derived from the 'omics' family of terminology, it should be used to describe the collective genomes of microbial species while the collection of organisms themselves should be termed "microbiota." While this argument sounds reasonable, the word microbiome isn't actually a derivative of the 'omics' naming scheme. One can find older uses. For example, in 1988, Whipps and colleagues used the term microbiome to describe the collection of microbes and their activities within a given environment. They state:

“A convenient ecological framework in which to examine biocontrol systems is that of the microbiome. This may be defined as a characteristic microbial community occupying a reasonably well defined habitat which has distinct physio-chemical properties. This term thus not only refers to the microorganisms involved but also encompasses their theatre of activity.” (Whipp, et al., 1988. Fungi in Biological Control Systems. Manchester University Press.)

Indeed, "microbiome" is a portmanteau of microbe and biome, describing the microbial ecosystem, inhabitants and all, and not just genomes. While the term is relatively new to our science vocabulary, the underlying concept and importance of microbiome work harken back to the very beginning of microbial ecology and to Sergei Winogradsky in the 1800s.

Sergei Winogradsky was born in 1856 in Russian-controlled Kiev. In his younger days he excelled in school, even receiving a gold medal for scholastic performance. However, during college he struggled to satisfy his curious mind. It was only after exploring studies in law, followed by the piano, that Winogradsky finally decided to pursue scientific research. He started out in the lab of the Russian botanist, Andrei Famintsyn, studying Mycoderma vini, known at the time as a plague on sugar beets and today for causing spoilage in wine. Later, under the guidance of the German botanist, Anton deBary, Winogradsky studied the growth and metabolism Beggiatoa.

Not much was known about this filamentous bacterium at the time, aside from its ability to accumulate sulfur granules when in its natural environment of sulfur springs. Winogradsky determined that 1) Beggiatoa is able to oxidize hydrogen sulfide (H2S), which is what leads to granule formation and 2) does so in nature by migrating to the narrow region where both O2 and H2S coexist. From these studies, Winogradsky formed the basic understanding of chemolithotrophy, the ability to obtain energy from the oxidation of inorganic compounds, such as H2S. He later built upon this, forming the understanding of autotrophy, the ability to produce food from inorganic substances using light or chemical energy. From this work, the concepts of the sulfur and nitrogen cycles (the processes by which these elements move through the environment and living organisms) emerged.

It was during his time at the Swiss Polytechnic Institute in Zurich, from 1888-1891, that Winogradsky began trying to piece together the microbial involvement in the nitrogen cycle, more specifically the steps of nitrification (the oxidation of ammonia to nitrite to nitrate). He later continued this work at the Imperial State Institute of Experimental Medicine in St. Petersburg as Chief of General Microbiology from 1891-1905. Through a great deal of trial and error, compounded by his erroneous assumption that nitrification occurred in a single step and by a single microorganism, he eventually uncovered the delicate balance of 2-step nitrification and the process of nitrogen fixation (the process of assimilating nitrogen from the atmosphere into organic compounds, e.g. ammonia). By mimicking natural soil conditions, Winogradsky, observed how the oxygen-requiring (aerobic) nitrification bacteria were able to deplete oxygen levels down to a point where the anaerobic (requiring the absence of oxygen) nitrogen-fixer, Clostridium pasteurianum could grow and fix nitrogen. Such a discovery underscores the interconnectedness of microorganisms, which occupy the niches created by their neighbors' activities and use the products of one metabolic pathway as substrates for another.

It was from this observation that Winogradsky argued for the need to study microbes in their natural contexts. Thus, founding microbial ecology as an avenue of research, which studies microbes as they interact with each other and within the context of their environment whether it be aquatic, terrestrial, atmospheric, a living host, or a mixture of any of these.

The infamous Winogradsky Column, a culturing device that permits researchers to study microbes as they interact with each other in a natural setting, was developed from this understanding. While one may find Winogradsky Columns decorating the offices of microbial ecologists due to their fascinating color changes and the historical significance to the field, these devices are still used to isolate environmental microbes with desirable traits and to teach students about microbial communities while investigating the impact of human activities on different ecosystems. The study of microbiomes also utilizes this fundamental ecological concept to the point that a great number of prior microbial population and microbe-environment studies could be rebranded as microbiome work.

Why is this point on origin significant? For starters, it's important to know the true history of microbiome research, because it leads researchers to the host of statistical techniques and experimental methods that have been developed over the years to specifically address microbiome-related questions. As Winogradsky accurately points out, a microbe in continuous culture behaves differently from its natural habitat. In a 1949 paper, he stated:

“…condition of pure culture in an artificial environment is never comparable to that in a natural environment…one cannot challenge the notion that a microbe cultivated sheltered from any living competitors and luxuriously fed becomes a hot-house culture, and is induced to become in a short period of time a new race that could not be identified with its prototype without special study.” (Winogradsky, 1949)

Microbes behave differently in the lab than they do in their native habitat, which limits researchers' understanding of what occurs in the habitat, or even in the patient of question. Microbial ecology has a long history of addressing this challenge in information gathering by studying microbes directly in their natural environment, replicating natural conditions in controlled studies, and by working with cultures only recently isolated from the environment instead of propagated continuously in the lab. New studies approaching microbial populations in the human host and elsewhere can benefit from the work that has come before.

It's important to recognize the commonalities across these seemingly distant fields within microbiology. If we view the planet as a patient with systems of gas exchange, breakdown and build-up of energy stores, removal and reuse of old components into new ones, and with ailments and diseases too, then the studies of these processes—environmental microbiology and microbial ecology—are the medical equivalents to studying the anatomy and physiology of the planet.

Ultimately, this knowledge informs our strategies for maintaining and improving our planet's health. You wouldn't want to go to a doctor who didn't understand human anatomy or physiology, nor would you take an untested treatment for a disease. So too, with the global environment, we need to understand how the system works in order to recommend practices that can effectively "cure," "treat," or ideally prevent damage.

One of the most exciting outcomes of microbiome research is the opportunity to strengthen ties between the distant poles of medical and environmental/ecological microbiology, so that both tools and collaborations can be strengthened and lead to better understanding for all.

Prescott, Susan. 2017. History of Medicine: Origin of the Term Microbiome and Why it Matters. Human Microbiome Journal. 4: 24-25. 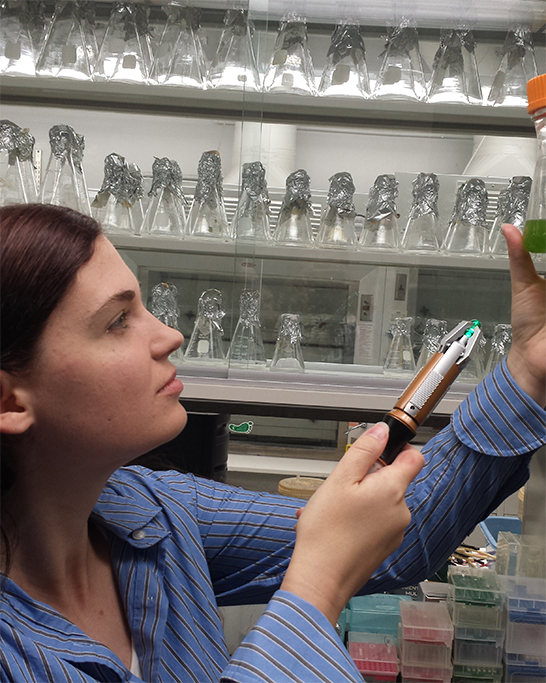