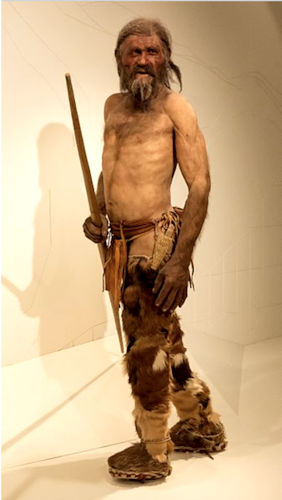 In 2010, the 5,300-year-old body of a man found frozen and mummified in the Ötztal Alps was finally autopsied. He was affectionately named Ötzi, or the Iceman of Tyrol, and he became a man of intrigue and mystery within the scientific community. Although the cause of death was ruled a homicide due to the discovery of cerebral trauma and an arrow head lodged in Ötzi’s left shoulder, paleomicrobiological analysis of microbial ancient DNA (aDNA) revealed a number of unrelated health concerns lurking within his body. In addition to suffering from hardening arteries and gallstones, Ötzi’s gut contained the eggs of parasitic whipworms (Trichuris trichiura). Helicobacter pylori aDNA was isolated from the Iceman’s gastrointestinal tract, and the genetic footprint of Borrelia burgdorferi was found in his DNA, making Ötzi the oldest known human to be infected by the bacterium that causes Lyme disease. Thus, the field of paleomicrobiology played a significant role in the investigation of one of the coldest cases in human history.

Paleomicrobiology is the study of microorganisms associated with prehistoric material. It is a fascinating branch of science borne from multiple disciplines including microbiology, anthropology, history, paleontology, and archaeology. The field relies heavily on the analysis of microbial aDNA to diagnose ancient infectious diseases and analyze the virulence, evolution, and lifestyles of ancient pathogens. As a result, contributions of this branch of science can generate valuable, new insights pertaining to historical epidemics, plagues, and enigmas like the case described above.

Ancient DNA: What Is It and Where Is It Found?

Previously, researchers relied primarily on early writings and skeletal remains to piece together ancient forensic puzzles. The introduction of PCR coupled with DNA sequencing have now made it possible for paleomicrobiologists to produce useful data from very small quantities of detectable microbial aDNA. To date, we have successfully isolated microbial aDNA from environmental and tissue sources including permafrost, halites, amber, scrolls, coprolites (fossilized dung), internal organs, bones, and teeth. Dental pulp, the highly vascularized organ located inside of the tooth, is a particularly rich source of microbial aDNA for bloodborne infections. It is relatively easy to isolate and is protected from environmental contamination by enamel and dentin. Unfortunately, dental pulp isn’t preserved in all cases. Factors that affect dental pulp preservation include tooth type (larger, multi-rooted teeth work best), health of the tooth itself, time, and the environmental conditions of decomposition.

You might still be wondering: how can worthwhile genetic material be preserved for so long when environmental exposure and natural denaturing processes (cross-linking, deamination, and fragmentation) are at play? Certain characteristics of prokaryotic cells and prokaryotic DNA make them much more resilient to degradation than eukaryotic DNA. A list of some of the key factors that contribute to the preservation of microbial DNA from ancient samples includes:

A Brief Survey of Some Significant Paleomicrobiological Findings

Let’s take a look at a couple of cases where microbial aDNA has been used to successfully diagnose ancient infectious diseases.

Case 1: Something Sinister in the "Tombs of the Nobles"

Clues: When the human remains of approximately 566 individuals were exhumed from the necropolis of Thebes-West, Egypt and the necropolis of Abydos, Upper Egypt, researchers were excited about the large quantity of well-preserved skeletal material that was excavated. But it didn’t take long before they began to notice recurring cases of bone change and abnormal spinal morphologies amongst the skeletons. Signs pointed to infectious disease as the cause of death, and paleomicrobiologists set out to determine a diagnosis.

Background: Tuberculosis is primarily a lung infection, but when it spreads to the bone, it begins to eat away at the vertebral bodies and eventually results in characteristic skeletal changes including vertebral collapse and fusion (Pott’s disease). It is estimated that 3-5% of untreated TB cases result in skeletal tuberculosis.

Bone samples from 41 individuals were selected for this study. 3 of these cases contained morphological changes consistent with spinal TB. 17 cases revealed non-specific bone changes that indicated the presence of disease but were independently unidentifiable as TB, and 21 cases showed relatively normal bone morphology.

Diagnosis: aDNA was isolated from all 41 samples, and the microbial suspect, Mycobacterium tuberculosis, was identified in 2/3 probable cases, 13/17 non-specific cases, and 14/21 cases with normal bone morphology. As a result, researchers not only demonstrated that TB can be diagnosed from ancient Egyptian skeletal remains dating as far back as 3,000 BC, but also that the historical prevalence of TB greatly supersedes the number of cases that demonstrate characteristic TB bone lesions.

Clues: In 1994, a mass grave was discovered outside an ancient convent in Marseilles, France. No evidence of violent death (war or massacre) and no diagnostic lesions were found on the skeletal remains. However, researchers suspected that a major health crisis was at the root of this mass causality. Historical accounts indicated that the convent served as a "plague" hospital from 1720 to 1722, and the uncovered grave was dated May-June 1722.

Background: Prior to the introduction of molecular techniques such as PCR and DNA sequencing, our understanding of past plagues was based exclusively on the historical record. Because of this, debates about the cause and transmission of the plague of the Middle Ages circulated for many years. While some believed the causative agent of the Bubonic Plague was Yersinia pestis, others postulated that it was hemorrhagic fever caused by Ebola or Marburg virus.

Diagnosis: Isolating aDNA of the causative agent from ancient bones proved challenging, but this did not deter a team of scientists from Aix Marseille University. They reasoned that if the microbe had entered the patient’s bloodstream before he/she died, microbial aDNA would be detectable in the vascularized dental pulp of his/her remains. This reasoning proved sound when dental pulp harvested from corpses in the mass grave revealed aDNA of Y. pestis. As a result, these scientists became the first to use dental pulp as a successful source of aDNA isolation and proved the microbial cause of the great plague of the Middle Ages was indeed Y. pestis.

Since its introduction in the 1990’s, Paleomicrobiology has made a big impact. Through the study of ancient DNA, using various tools and resources, researchers have gained valuable knowledge about the mechanisms of DNA preservation and gene evolution. They have also helped solidify the diagnoses of many past diseases based on preserved molecular findings. It is certainly exciting to think about where the future of this field of study will take us because as George Orwell so aptly pointed out, "Who controls the past controls the future."