I'm with a team of scientists from the Global Microbiome Conservancy (GMbC) at MIT and we're in northern Tanzania near Lake Eyasi preparing to join a Hadza hunting party. As a few hunters pause to drink from a small pond, one of the leaders casually points out the unmistakable tracks of an elephant at the water's edge.

Shani Sigwadze, our Hadza guide and interpreter, explains we won't be going that direction. These elephants are known to attack, and we scientists can't run fast enough.

While we're not here to run for our lives, the GMbC team is in a race that is no less urgent: to isolate and preserve microscopic biodiversity before it's too late.

Microorganisms have co-evolved with humans for millions of years, but are now threatened by rapid changes in diet and lifestyle. Humanity's microbial heritage is at risk of disappearing.

The Elephant in the Room: Skewed Datasets and Missing Microbes

The microbiome is arguably one of the most exciting topics in science today. Yet despite remarkable progress, our current understanding of the human gut microbiome is fundamentally flawed: we're not seeing the full picture.

The vast majority of human microbiome studies have characterized a limited subset of populations and lifestyles; predominantly skewed toward subjects in the urban centers of industrialized nations. This remains true in spite of mounting evidence demonstrating that these very communities tend to have comparatively less microbial diversity than those elsewhere who are maintaining more traditional lifestyles.

Without addressing this sampling bias in datasets and strain collections scientists won't be able to fully understand some of our most important, ancient, and intimate connections with the microbial world.

Failing to capture the full diversity of healthy human guts may impede our ability to develop effective microbiome-based therapeutics. Furthermore, groups that are currently underrepresented or excluded from initial studies are less likely to benefit from medical advances tailored only to well-studied populations.

That's why a diverse array of specialists from the GMbC are embedded with the Hadza, among the last remaining hunter-gatherer societies in Africa, struggling to keep up and keep quiet on an evening hunt. Our team is on a mission to create a comprehensive culture collection of microorganisms reflecting the full diversity of global human gut, and we're learning what makes the Hadza lifestyle and their microbiomes distinct.

Dramatic shifts towards industrialized lifestyles have been linked with reduced biodiversity in gut bacterial communities. Within the blink of an eye on evolutionary timescales, relationships humans have had with our microbial counterparts are being severed. A growing number of scientists hypothesize these “missing microbes” may explain the dramatic increase in a wide variety of non-communicable diseases associated with industrial lifestyles.

Global urbanization trends show no signs of slowing. By 2050, an additional 2.5 billion people are expected to transition from rural to urban lifestyles, threatening the viability of important microbes that may be limited to currently non-industrialized societies.

Our window of opportunity to characterize these fascinating host-microbe interactions is closing quickly, leaving scientists scrambling to understand and preserve this hidden biodiversity.

Accordingly, the GMbC is teaming up with collaborators and communities across the globe to sample, isolate, and preserve the full bacterial biodiversity of the global human gut. They're creating a non-profit microbial seed bank intended to curate this important biodiversity and enable research to help understand our microbial heritage.

A Microbial Zoo Generated from Poo

Most people aren't used to talking about their poop, let alone meeting strangers interested in collecting it to identify the microbes living in the gut. You might think it would make for awkward conversation, but it's a surprisingly effective icebreaker. Everyone can share a good laugh, and it serves as a reminder that some things are universal.

However, long before the GMbC can begin handing out bowls to collect stool in the field, team members first need to establish collaborations with local scientists, obtain appropriate sampling, ethical and export permits, and then begin the process of obtaining free, informed, and prior consent.

It's a complicated process that's often country- and community-specific, but establishing an ethical framework for each and every collaboration is crucial to prevent “Parachute Science.” Far too often foreign scientists drop-in, collect data, and leave without involving or benefiting local scientists or subjects. This is particularly important when many of the communities working with the GMbC are marginalized minority populations.

Respect for privacy, cultural sensitivities, and autonomy also explain why all anonymous participants retain the exclusive rights to their material and its derivatives. As the sole owners of their samples, donors can withdraw their participation and their samples at any time, and any strains originating from their donation will be destroyed. Additionally, bacterial strains conserved in the biobank will only be shared with third parties for non-commercial research purposes.

To date, the GMbC has established working collaborations with more than 70 scientists in approximately 30 countries. In each, the team works with local scientists to promote capacity building with partner institutions. Beyond meaningful long-term international collaborations, this can include hands-on scientific training and processing additional samples to remain on-site that support local research.

The GMbC is focusing on underrepresented societies, including indigenous communities maintaining non-industrialized lifestyles, since evidence shows these communities harbor distinct and diverse microorganisms not currently represented in most datasets or culture collections. So far their preliminary global campaign has collected, preserved, and sequenced more than 16,000 bacterial strains from populations in Arctic regions, East and Central Africa, and Southeast Asia.

The Global Human Gut: Sampling the Species in our Feces

While it's undeniably exciting to travel the world for science, collecting and processing stool isn't always glamorous. In fact, processing the stool is fairly mundane. A small scoop goes in one tube to stabilize nucleic acids. Another scoop is mixed with a glycerol solution then pipetted into aliquots (which can get tricky depending on seed and fiber intake) before being frozen and shipped back to the lab at MIT for strain isolation. Finally, a small sample is wrapped in aluminum foil with desiccant to dehydrate the sample for metabolite profiling.

What actually requires the most time and energy is subject recruitment and an exhaustive lifestyle questionnaire. It's critical to understand what dietary, behavioral and environmental factors might shape each participant's microbial community. Accordingly, the detailed survey includes a wide variety of attributes associated with changes in gut community composition.

Typically the GMbC team aims to recruit around 30 participants from each community they sample, and they try to include 3 distinct lifestyles within each country they visit. In Tanzania this included the hunter-gatherer Hadza, pastoralist Datoga, and residents of a nearby rural city. In that case, all 3 communities lived within 50 miles from one another yet represented drastically different lifestyles.

While it sounds simple enough, there are inevitably cultural and logistical challenges specific to each community. Take a recent sampling trip to Malaysia where the team worked closely with 2 Orang Asli (“original people” in Malay) communities.

After driving hours through palm plantations to reach a Batek community that had been recently relocated to the edge of a protected national forest, the team spent another hour attempting to find the current whereabouts of the semi-nomadic hunter-gatherers. Then, after a day or 2 of limited participation, they learned some in the community were hesitant to bring samples back to the village, so the team adjusted their approach and processed samples within the forest.

On the second leg of the sampling expedition, the team worked with a Jahai village accessible only by water deep within the ancient rainforests of Royal Belum State Park. There, the team (and fresh samples) needed to be regularly ferried back-and-forth between the village and the houseboat where they were processed near their supply of liquid nitrogen (on the poop deck, of course).

While a good sense of humor and a strong stomach are useful in this line of work, the most important prerequisites are humility and a deep respect for the remarkable communities that make all of this vital research possible in the first place.

The Global Microbiome Conservancy is preserving more than just endangered biodiversity; these bacterial cultures also represent human cultures. These microorganisms are a tangible byproduct, a living legacy, of distinct ways of life and shared evolutionary histories.

They also reflect our scientific values. With next generation microbial-based therapeutics on the horizon, it's critical we understand the full diversity of the global human gut to better understand the healthy human microbiome and ensure the future of medicine benefits all. 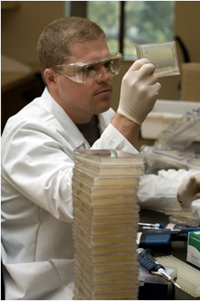 Christopher H. Corzett, Ph.D. is a Senior Research Associate at the University of Southern California.