Bacterium of the Day: Using Twitter to Feature Uncommon Species

Share This
How many validly published bacterial species are there? According to the List of Prokaryotic names with Standing in Nomenclature (LPSN), a repository for information on the nomenclature of bacteria and archaea curated by Aidan C. Parte and the Leibniz Institute DSMZ, there are over 16,500 unique species of prokaryotes, with nearly 1,000 novel organisms described each year. A 2019 mBio paper expanded on this, noting nearly 21,000 prokaryotic species and subspecies with valid publications. The report states that there are nearly 10 times as many species represented in the SILVA rRNA database. However, even these numbers may be low, with some predictive models estimating as many as 1 trillion species. Considering how few bacterial species can be successfully detected, isolated and cultured, perhaps this will prove to be true. So why is it, given thousands of published species, we can only name a handful when asked?

From Insomnia to Scicomm: The Question That Launched #Dailybacteria

“Can you name a bacterial species starting with each letter of the alphabet?” It was an easy enough question to ask while unable to sleep late one night in November 2019. Agrobacterium tumefaciens, Bacillus subtilis and Chryseobacterium piperi started off my list easy enough; I could quickly rattle off common examples like human pathogens and model organisms, and I could list the bacteria I worked with without a second thought. I was a little over half complete when I hit a wall, realizing that some letters were far easier to name than others. Why could I name a handful of bacteria starting with S (Staphylococcus aureus, Streptococcus pyogenes and Sinorhizobium meliloti to name a few), but could not come up with any, save for a few archaea, that started with a T?

Then it dawned on me. When we scientists discuss bacteria with lay-persons and the general public, we typically only use the common examples that always get tossed around: E. coli, Staph, Strep or maybe just the diseases they cause, like anthrax or “the plague.” Furthermore, when we talk about our work with collaborators or among our home departments, we only talk about the few species we work with and, if we’re lucky, a few close relatives. We have tunnel vision about our bugs.

Despite the 16,500 accepted species, I couldn’t make a list of 26. I wanted to change that, but moreover, I wanted to help others learn about the species that oftentimes get overlooked. Unfortunately, I didn’t really know how to best advocate for these underappreciated bacteria. I wasn’t active on social media and wasn’t teaching at the time, but I was inspired by the science communication done by several podcasts’ hosts, most notably Alie Ward and her Ologies guests.

Launching “Bacterium of the Day”

On Dec. 5, 2019, I shouted “#DailyBacteria” into the Twitter void alongside one of the earliest described bacterial species: Serratia marcescens.

S. marcescens was first identified in 1819 and described 4 years later, in 1823, by Italian chemist Bartolomeo Bizio when he examined a blood-red substance growing on polenta. This pigment, it was later found, dissipates very quickly. S. marcescens’ species descriptor is derived from the Latin demarcesco, to wither or fade away, a direct reference to this phenomenon. The genus, however, was named by Bizio in honor of Serafino Serrati, a Florentine physicist who pioneered work on steamboats and whose work Bizio felt had been neglected. Over a hundred years after its discovery, starting in the 1940s, S. marcescens would be investigated for its use as a bioweapon simulant by the United States military. Since then, it has been identified as a cause of hospital-acquired infection and its use as a bioweapon simulant has ceased.

Using the Bacterium of the Day as a Teaching Tool

I kept up with the daily posts, 7 days a week, always thinking about how to better spread the word. I was, at this point, still new to Twitter and still learning and tinkering with the layout of the posts. As I was preparing a post one day in January, I happened upon a game of hangman in a neighboring lab. Immediately, I set up a version in my lab, replacing the gallows with a flask that would fill with bleach as guesses for the day’s unreleased bacterium were made. The game caught on quickly, with undergraduate and graduate students alike taking turns trying to work out the day’s bacterium before it was posted. Over time, they began to learn commonalities in nomenclature: prefixes, suffixes and the most frequently occurring letters. The game even found its way into my introductory biology classroom when it was used to review the basics of bacterial physiology. Eventually, a fellow lab member challenged me to find a species lacking the four letters most guessed by the rest of our lab group: A, C, E and R.

Histophilus somni was my answer to this challenge. Led by Øystein Angen, a collaborative group out of Denmark, Germany, and Switzerland expanded on earlier characterizations of 3 separate species (Haemophilus somnus, Haemophilus agni and Histophilus ovis) and consolidated them into a single unified speces: H. somni. Phenotypic analyses, 16S ribosomal DNA similarity, and overall DNA-DNA hybridization proved that these 3 species were actually 1 species. This unification helped to correct some previous controversy surrounding the original species (incorrect latin grammar for Ha. somnus and name preferences based on country, e.g., H. ovis preference by Australian authors).  The bacterium itself is gram negative, produces a yellow pigment and is non-motile. Though Angen’s group  initially isolated their strain from brain lesions, H. somni can cause infectious thromboembolic meningoencephalitis (ITEME), pneumonia, septicemia, mastitis, arthritis, myocarditis, and reproductive disease in cattle and sheep. Even its name, somni, Latin for ‘of sleep,’ is derived from one of the disease conditions relating to the bacterium: sleeper syndrome. This syndrome is characteristic of ITEME and causes central nervous system depression and closed eyes.

Unaware of the challenge posed by myself and their lab mate, the rest of the Heindl lab group eagerly awaited the day’s bacterium. While some previous species had proven difficult to guess, my lab mates were efficient in correctly answering the puzzle. When they finished, they had incorrectly guessed only 4 letters: the same four I had been challenged to omit.


Expanding the Reach of the Daily Posts

While the Bacterium of the Day posts were gaining notoriety among my home lab, classroom and colleagues, I continued to look for ways to reach a more global audience. I was becoming more active on Twitter, doing my best to learn the idiosyncrasies of the platform I had long neglected. At the same time, I was working in unique examples of bacteria whenever possible in my class, rather than always relying on the big-name species. As my students approached their final exam, an idea came to me while drafting a question regarding flightless birds: with World Penguin Day just around the corner, why not try to find a penguin-associated bacterium for #DailyBacteria?

Corynebacterium spheniscorum became Bacterium of the Day for April 25 in honor of the international celebration as I aimed to highlight this unique organism and incorporate the celebration’s #WorldPenguinDay hashtag. C. spheniscorum was identified by a collaborative team spearheaded by J. F. Fernández-Garayzábal’s lab from the Universidad Complutense in Madrid, Spain. It was isolated from the cloacae (posterior orifice for both the digestive and reproductive tracts) of healthy, wild Magellanic penguins (Spheniscus magellanicus), from which its species descriptor is derived. The bacterium itself is a non-motile, gram positive, rod-shaped bacterium that forms smooth, circular, whitish colonies and does not cause any disease on the penguin it colonizes.

Sometimes, It’s All in the Name

Bacterium of the Day continued, and with each post I found a new, unique and incredible organism that was isolated, identified and characterized by groups of hard working individuals across the globe. Each of these species has a story to tell, and more often than not, part of that story is in its name.

We’ve discussed bacteria named after physiological effects (S. marcescens), their pathology (H. somni) and their host organism (C. spheniscorum). Other bacteria are named for characteristics as varied as the organisms themselves. Occasionally, a bacterium is named for our own history and culture, or those who seek to preserve it.

Hoyosella altamirensis is one such bacterium. It is spherical and typically occurs singly, in pairs, tetrads or in small clumps. It grows best in aerobic environments at 28°C (~82°F) and usually takes on a cream-colored appearance. Ho. altamirensis was named for the Altamira Cave in Cantabria, Spain where it was isolated, and for Dr. Manuel Hoyos who pioneered research towards the preservation and protection of the polychromatic paintings found within the cave system.

It is my hope that you join me for a new Bacterium of the Day. If you have a bacterial (or archaeal) species you would like shared, I’m always open to requests or suggestions. Finally, if you want any more information on any prior highlighted bacterium, do not hesitate to ask. Allow me to end with one final question, the question that started this journey:

Can you name a bacterial species starting with each letter of the alphabet? 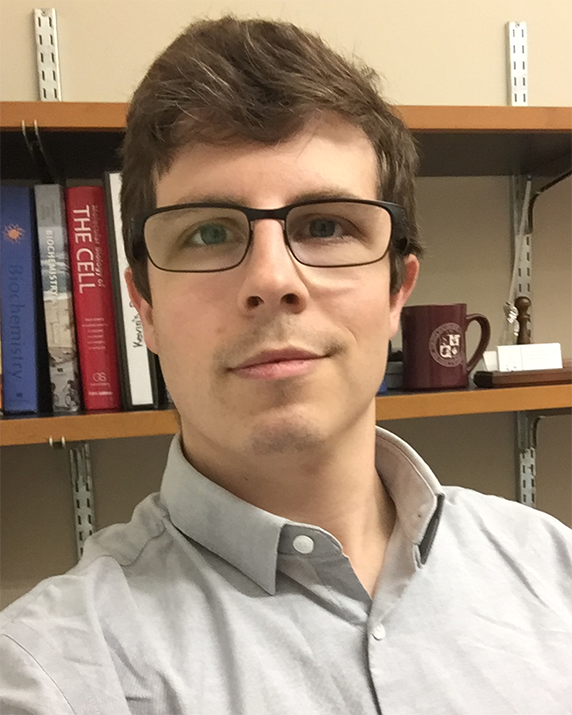 Dr. Kevin Failor is a postdoctoral research fellow in the Heindl Lab of the University of the Sciences in Philadelphia.