What Counts as a Microbe?

Microbes were so named because they were thought to only be visible with the help of a microscope. Yet, from a purely definitional standpoint, many fungi are exceptions to this rule, as are Epulopiscium bacteria. Another paradox is that both a virus that is 1/4000th the width of a strand of hair and a clearly visible bread mold are considered microbes. Fungi also include species like the honey fungus, which is the largest living thing on Earth by virtue of its vast underground filamentous networks that can stretch for miles. Clearly, there is wide variation in size and lifestyle, even within the same microbial group.

The History Behind 'Microbe'

Most introductory microbiology classes mention Antoni van Leeuwenhoek and Robert Hooke, both members of the Royal Society of London, who saw and documented the first microorganisms. While initial discoveries like Leeuwenhoek's were focused on microbes in the human body, 18th century scientists quickly became aware of the microbes around them, as evidenced by books like Observations d'histoire naturelle, faites avec le microscope and Christian Gottfried Ehrenberg's German works on invisible life in the atmosphere. Until this point, these microscopic creatures are described in vague terms, and parallels are drawn with the animal world: Leewuwenhoek termed his discoveries "animalcules," while Ehrenberg was the first person to use the word "bacterium."

From the 1850s and onward, the introduction of microscopes into Victorian homes greatly increased our understanding of microbial diversity: descriptions of bacteria, protozoa and ciliates abound at this time. The microscope was now able to reveal hidden worlds to non-scientists, especially Victorian women and children, and their descriptions are filled with images of hidden, fantastical worlds with parallels to fairies and mythical creatures. The latter half of the 19th century also saw the inception of the word ‘microbe,' which is formed from 2 Greek words, "mikros" and "bios," meaning "small life."

The Challenge of Defining 'Microbe'

Science's understanding of the microbial world has come a long way in the centuries since animalcules were first seen. They aren't considered little animals anymore, they are known to be the oldest occupants of Earth, and they significantly outnumber human beings and other eukaryotes. As knowledge of the microbial world has expanded, words like ‘microbe' or ‘microorganism' are still used as blanket terms that could refer to individuals from various groups, such as bacteria, fungi, viruses or protozoa.

In contrast to the dental plaque bacteria discovered over 300 years ago, the first virus was identified at the turn of the 20th century, followed by imaging several years later. This discovery further added to the complex lifestyles and histories that are encapsulated within the word ‘microbe.' Scientists have questioned whether the ‘bios' part of microbe applies to viruses, since they need a host to ‘live' or acquire nutrients and produce new virions. Another surprise was in store for microbiologists, however—the late 1970s saw the discovery of Archaea. The tree of life now indicates that Archaea (unicellular organisms) share striking genetic similarities with eukaryotes (multicellular organisms), despite being closer to bacteria in age and physiology! For instance, archaeal ribosomal proteins and ubiquitin systems are strikingly similar to eukaryotes'. As more light is shed on new microbial taxa, more anomalies appear in the idea of the standard definition for microbes.

One of the reasons this and many other fundamental terms in microbiology are hard to define is the vast, complicated nature of the microbial world. The breadth of life that we cannot see is hard to bin into discrete categories. As more and more species are discovered, scientists are forced to reckon with the immense biological complexity of these tiny creatures. From awakening deep sea bacteria that were dormant for 100 million years to discovering bacteria that can survive radiation that would kill a human being, microbiologists are being asked to examine anthropocentric views of what is “habitable” and where the boundaries of life exist.

Some biological discoveries have also challenged the very definition of life. Prions are proteins that don't code for genes, but have the innate capacity to cause other proteins to fold improperly, which can create new prions. Yet, most people would more readily consider a virus a microbe than a prion. There are some microscopic creatures that can remain in a state of dormancy—suspended between life and death—for several years, like bdelloid rotifers. Viruses, prions and rotifers are certainly small or ‘mikros,' but they move through the world very differently than bacteria or fungi do.

Why Does It Matter?

Suffice to say that the word "microbe" has been used to draw some broad circles around multiple, divergent categories. This is particularly noticeable in journal articles: many studies that involve 16S rRNA gene sequencing make inferences about microbes or microbial communities when they are really referring to bacteria. Such titles can be misleading; referring to bacteria as "microbial communities" would be similar to studying human beings and calling it a study of animal communities. This terminology can also lead to confusion about different microbial groups for trainees who are new to the field.

This isn't merely a pedagogical debate: words have power, especially the power to shape public view of microbiology. As the COVID-19 pandemic ravages communities worldwide, the word "microbe" conjures up images of spike proteins, masks and hand washing. Messaging about public health could be more effective if science communicators emphasized the differences between bacterial and viral infections, and didn't paint microbes as a broad, interchangeable category: antibiotics target bacterial pathogens and they are ineffective against viral infections. Viruses need to enter host cells to reproduce, while many bacterial pathogens can also mount infections by secreting toxic compounds that affect host metabolism. These facts influence treatment strategies for different types of infections.

Adding specificity to microbial conversations also allows for the introduction of nuance into the concept of a microbe, which can be especially helpful for introductory science classrooms. While "microbe" is a broad umbrella term that is helpful to introduce beginners to the field, understanding the differences between microbial groups builds competency in identifying the roles of specific sub-groups in human and environmental health. The role of soil microbes in sequestering carbon is a hot topic in climate research, but scientists typically measure bacterial and fungal activity to understand soil carbon storage.

Definitions and names need to evolve with our ever-expanding knowledge, which is no easy task. "Microbe" is a convenient and practical term to introduce novices to the multitudes of the microbial world, but professional microbiologists might want to ask themselves what they mean when they say "microbe": did they study the fungal community? Or the bacterial community? Or the phages that infect bacteria? In the microbial world, the devil is in the details. 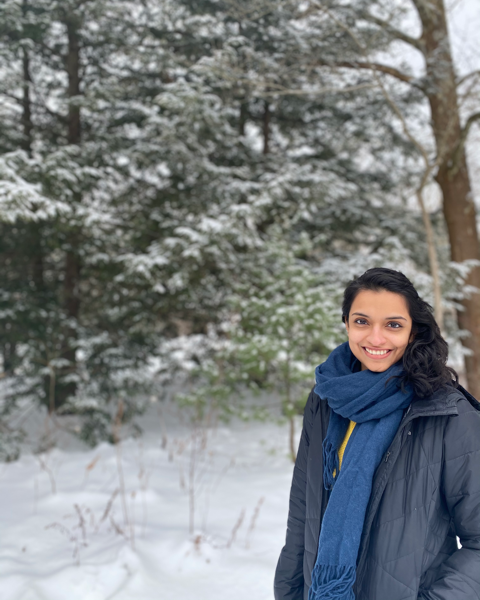 Janani Hariharan is a Ph.D. candidate in the School of Integrative Plant Science at Cornell University.