Share This
When striving to build a career, everyone needs allies, advocates and supporters. This is more true for people that come from historically underrepresented groups. Dr. Greetchen Díaz understood the importance of having people in her corner, and not only did she work to find mentors throughout her career, she also made it her goal to serve as a mentor and representative for other young Hispanic girls and women in STEM.

Reflecting on the celebration of Hispanic Heritage Month in the scientific context, Díaz emphasizes the importance of making the Hispanic scientific community and its contributions visible. By being visible, Hispanic scientists can serve as role models for new pioneers in their communities. This is especially important in the United States, where the population of Hispanic origin is fast growing, but its representation in STEM disciplines is very low.

In addition to representation and dismantling misperceptions, Díaz emphasizes the importance of Hispanics being champions of other Hispanics in science, especially the microbial sciences. Díaz mentions, “Throughout my career, I’ve had the support of people who have served as role models, mentors and supporters. Many of them have been Hispanic scientists who believed in my abilities and leadership, which helped motivate me to continue my research.” Díaz completed her master's degree in biology at the University of Puerto Rico, Mayagüez, and during those years, using microscopy, culture-based and molecular biology tools, she investigated the fungal diversity surviving high salinity conditions at solar salterns (installation for making salt), under the supervision of Dr. Rafael Montalvo. As a result, she documented, for the first time, the presence of a halophilic yeast in Puerto Rico. Díaz, who has always been fascinated by mycology, decided she wanted to continue her training in fungal cell and molecular biology.

After completing her master’s degree in 2006, Díaz was admitted to the Molecular, Cellular and Developmental Biology doctoral program at The Ohio State University (OSU). She joined Dr. Anita K. Hopper’s lab where she studied intracellular protein trafficking using budding yeast as a model system. When Díaz began her doctoral research, there was considerable scientific literature on the transport pathways and localization mechanisms of transmembrane proteins of the nuclear membrane in the eukaryotic cell. However, the way in which peripheral proteins associated with the nuclear membrane are located correctly had not been studied extensively. Through a genomic screen for essential genes, she described, for the first time, a requirement of the Spindle Pole Body (yeast centrosome) for targeting and tethering peripheral proteins to the inner nuclear membrane. It was then that she knew her love for microbiology would pave her way to a successful career in science.

Despite her love and passion for science, Díaz began to realize that there were not many people that looked like her in the field. When Díaz was doing her doctoral studies at OSU, she remembers only a few Hispanic colleagues within the Molecular, Cellular and Developmental Biology Program and her department. Díaz, also traveled to present her studies in specialized conferences in cellular and molecular biology and yeast genetics. In those conferences, she was the only one or one of the few Hispanic scientists. "The lack of representation always caught my attention and, although I was not sure at the time what I could do about it, it was a catalyst for me to become more interested in the topic of Hispanic representation in science."

Also, Díaz remembers receiving derogatory comments about her intellectual abilities. Díaz says, "People would tell me that I looked too sexy to be an intelligent scientist, and it was something that make me feel very unwelcome." She also heard many assertions and stereotypes about the Hispanic community that she understood to be erroneous and misconceived. Díaz, whenever she could, educated people to demystify those stereotypes, but understood that she needed engaging and visible platforms to continue that effort. Then, she founded at the non-profit Ciencia Puerto Rico (CienciaPR), where she served as a volunteer, the Borinqueña Blog on Hispanic women in science and technology. The blog highlights profiles and stories to help change the misperceptions she faced. She said, "I hope to encourage and empower all Hispanics in the STEM fields to put impostor syndrome aside, to stop thinking that they do not belong to science, research and power positions and to propel themselves into a successful and rewarding STEM career."

Díaz found that one way to advocate for Hispanic representation in science was to become involved in scientific professional societies.  To do this, Díaz also worked to become an active member and leader in her professional society – ASM and its local branch, The Puerto Rico Society for Microbiologists, where she served as president. It was a Hispanic leader at ASM, Dr. Joseph Campos, who provided significant opportunities for her to volunteer in special committees of the organization, that allowed her to develop an influential role and become a board director. More recently, she found a support group made up of Hispanic women scientists within the group of IF/THEN Ambassadors to which Díaz was invited in 2019. This showed Díaz that now, more than ever, Hispanic champions in microbial sciences matter a lot and are extremely needed in the goal of increasing Hispanic participation and, especially, in occupying decision-making positions that affect science and their communities.

Díaz continues to serve as a leader, both within ASM and throughout the microbiology field, in making the microbial sciences more diverse, inclusive, equitable and accessible, especially for the Hispanic community. In 2014, soon after her postdoc experience at the University of Nebraska studying replication of the Human Papilloma Virus, Díaz decided it was time to go back to Puerto Rico. Seeking the right position, she decided to move from the research lab and develop her professional career within the world of non-profit organizations. Díaz became the first director of the grants program at the Puerto Rico Science, Technology and Research Trust, the main scientific non-profit in Puerto Rico. There, she was responsible for the implementation of the first local grant mechanism for researchers. Currently, this program continues to be the main source of local funding for research in Puerto Rico and the Trust continues to impact the scientific community through various programs for students, researchers and entrepreneurs.

Then, after almost 10 years serving as a volunteer, Díaz enthusiastically accepted a position at CienciaPR, as Director of the Science Education Program and Community Partnerships. The Science Education program has several initiatives that promote the participation of STEM experts in K-12 science education. For example, the Seeds of Success STEM Ambassadors Program motivates Hispanic girls to pursue STEM careers and develop their leadership skills. Through this program, Díaz was able to combine her passion for STEM and advocating for women and girls. Together with her team, she has created activities and resources that highlight Latina women in STEM, expose girls to these disciplines and allow them to develop as leaders in their communities. Currently, the program is robust and popular and has directly impacted more than 360 girls and has reached more than 33,000 thousand people through community projects led by the participants.

As she thinks about the future generations of scientists, Díaz hopes they heed her advice – “Build your career and achieve success, then find a Hispanic [person] you can support to follow in your footsteps. Repeat whenever you can.” With this approach, Díaz believes the STEM fields will develop into a more diverse and inclusive field where all people feel inspired to thrive and flourish in their career.


Are you interested in developing DEI-related content for asm.org? If so, we invite you to apply for the ASM IDEAA Writer Team. The team is a collaborative group of 5 ASM members who write articles on inclusive diversity with equity, access and accountability (IDEAA). 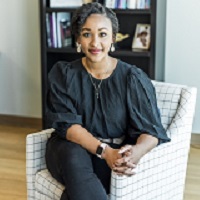 Shaundra Branova is a Senior Specialist at ASM who supports and develops projects, programs and initatives dedicated to elevating and embodying inclusive diversity.