A key role of a scientific association is to make the voices of its many individual members heard as a unified whole. Speaking on behalf of its 47,000 members worldwide, ASM has acted quickly to make the case to policy makers that we must take immediate and aggressive action against the emerging threat of Zika virus infection. In the United States, ASM has urged immediate mobilization of the nation’s considerable scientific and financial resources to counter the accelerating advance of the Zika threat.

Today, more than 60 countries have documented Zika virus transmission, with over 40 reporting their first outbreak within recent months. Now Puerto Rico has reported its first death due to Zika virus infection. To counter this expanding epidemic, the Administration asked Congress on February 8 for more than $1.8 billion in emergency funding to strengthen U.S. preparedness against the Zika virus, both here and abroad. The ASM has strongly endorsed this request to strengthen science-based, collaborative efforts against a threat that has proven more alarming by the day. On February 12, ASM sent a letter to Congress, asking the House and the Senate Appropriations committees to immediately approve the Administration’s requested Zika funding. ASM cited the need for intensified basic virology and entomology research, vaccine development, epidemiological studies, expanded surveillance, greater laboratory and diagnostic capability, and public education, all needed immediately if we are to get ahead of this advancing threat.

Unfortunately, Congress failed to act. On April 8, ASM renewed its pleas for the swift passage of the $1.8 billion supplemental funding in a second letter to Congress. In addition, ASM joined dozens of scientific associations, public health institutions, and other stakeholders in signing a group letter to Congress, calling for immediate action on the supplemental Zika funding. ASM was also a signatory on a March 23 appeal by a coalition of science and public health organizations to Congress for more robust funding in the FY 2017 appropriations bill for specific federal programs crucial to the nation’s overall preparedness against both naturally occurring and deliberately released biological threats. On July 18, the ASM sent another letter to Majority Leader McConnell and Minority Leader Reid, Speaker Ryan and Minority Leader Pelosi urging congressional action on Zika funding. On August 5, the ASM released a statement urging public health action and funding to combat the Zika emergency.

The ASM has not limited its actions to Congressional appeals. To stimulate basic research, ASM hosted a one-day conference on June 1 at ASM Headquarters, bringing together the key scientists who study this once overlooked virus. We have received many more abstracts than we could accept and the conference is largely oversubscribed. The ASM could not be more excited by this event, in collaboration with the American Society for Virology. The conference provided a working synthesis of the basic and applied scientific information we currently have about Zika virus and will create a core knowledge base that ASM can make widely available. The meeting entitled “What Does the Biology of Flaviviruses Tell Us About Zika: The Importance of Fundamental Virus Biology,” included sessions on Viral Replication Machinery, Innate and Adaptive Immunity, Epidemiology and Pathogenesis, and Virus-Host Interactions. We are expecting in depth presentations by 20 leading experts along with research abstracts from a wide range of fields that touch on flaviviruses. We also hosted a press conference before the scientific meeting and a live This Week in Virology (TWiV) podcast.

ASM’s CEO Dr. Stefano Bertuzzi has also convened a Zika topic forum to facilitate discourse between scientists and the news media, helping science reporters to focus on the core science and the key issues. ASM has published a review on the Zika Virus in Clinical Microbiology Reviews, mini reviews in the Journal of Clinical Microbiology and the Journal of Virology and an editorial in mSphere.

ASM has worked to assist the FDA in Zika diagnostic test development by recruiting clinical laboratory and research personnel from our membership to join a list of technical experts and to offer facilities to carry out comparator testing, when necessary.

On May 12, ASM officials met with members and staff of the Senate and House appropriations committees to encourage prompt action by Congress on emergency supplemental funding at the President’s requested level to address the Zika threat. Congress is expected to consider and move legislation the week of May 16 to fund the federal response to the Zika outbreak.

ASM believes that our best defense against the Zika virus is to adequately fund scientific research, to bolster public health efforts, and to share the latest knowledge and technology among the many stakeholders. ASM recognizes Zika as a public health crisis. Now is the time for the global community to draw on the many hard lessons we have learned in recent years from battling emerging infectious diseases. 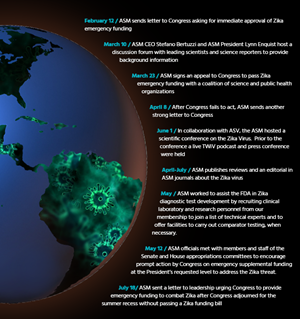