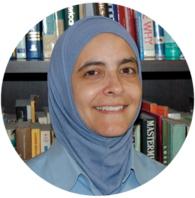 Rana Dajani, Ph.D. molecular cell biology, a Fulbright alumnus twice, an Eisenhower fellow in 2014, and Associate Professor, founded the service learning center and formerly served as director of studies at the Hashemite at the Hashemite University, Jordan, and she is a Yale Stem Cell Center visiting professor. She is the world authority on the genetics of the Circassian and Chechan populations in Jordan. Her research focuses on genome-wide association studies concerning diabetes mellitus and cancer and stem cells. She advocated the establishment of the law for stem cell research and therapy in Jordan.

Dr. Dajani is a higher education reform expert and member of the UN women Jordan advisory council. She frequently publishes in Nature about science, education, and women in the Arab World, has established a network for women mentors, and is a strong advocate for the theory of biological evolution and Islam. She was proclaimed one of the most influential women scientists in the Islamic World and twelfth among the 100 most influential Arab women in 2015.

Dr. Dajani has developed a community-based model and philosophy “We love reading” to encourage children to read for pleasure. She has received multiple awards: the Synergos award for Arab world social innovators 2009, the Library of Congress literary award 2013 best practices, WISE Award, King Hussein Medal of Honor 2014, and Star Award for education impact 2015. “We love reading” has spread to 27 countries.