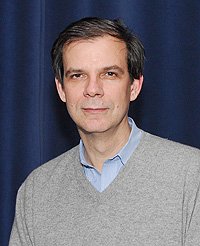 Arturo Casadevall, M.D., Ph.D. is the Leo and Julia Forchheimer Professor of Microbiology & Immunology at the Albert Einstein College of Medicine of Yeshiva University in the Bronx, New York.  He is Chairman of the Department of Microbiology and Immunology and served as Director of the Division of Infectious Diseases at the Montefiore Medical Center at the Albert Einstein College of Medicine from 2000-2006.  Dr. Casadevall received both his MD and PhD (biochemistry) degrees from New York University in New York, New York.  Subsequently, he completed internship and residency in internal medicine at Bellevue Hospital in New York, New York.  Later he completed subspecialty training in Infectious Diseases at the Montefiore Medical Center and Albert Einstein College of Medicine.  Casadevall major research interests are in fungal pathogenesis and the mechanism of antibody action.  In the area of Biodefense Casadevall has an active research program to understand the mechanisms of antibody-mediated neutralization of Bacillus anthracis toxins.  He has authored over 490 scientific papers.  Casadevall was elected to membership in the American Society for Clinical Investigation, the American Academy of Physicians, and the American Academy of Microbiology.  He was elected a fellow of the American Academy for the Advancement of Science and has received numerous honors including the Solomon A Berson Medical Alumni Achievement Award in Basic Science from the NYU School of Medicine, the Maxwell L. Littman Award (mycology award), the Rhoda Benham Award from Medical Mycology Society of America, and the Kass Lecture of the Infectious Disease Society of America.  Casadevall is the Editor in Chief of mBio, the first open access general journal of the American Society of Microbiology.  He serves in the editorial board of the Journal of Clinical Investigation and the Journal of Experimental Medicine. He has served in numerous NIH committees including those that drafted the NIAID Strategic Plan and the Blue Ribbon Panel on Biodefense Research.   Casadevall served on the NAS committee that reviewed the science behind the FBI investigation of the anthrax attacks in 2001.  He is a member of the National Science Advisory Board for Biosecurity and co-chaired the NIAID Board of Scientific counselors.

Since he joined the Einstein faculty in 1992 Casadevall has mentored dozens of graduate students, postdoctoral fellows, and junior faculty.  Many of his trainees have gone on to have highly successful careers in science and several have become AECOM faculty.  From 2000-2006 Casadevall was director of the Division of Infectious Diseases at AECOM-Montefiore and oversaw the expansion of its research program.  In 2001 Casadevall received the Samuel M. Rosen outstanding teacher award and in 2008 he was recognized the American Society of Microbiology with the William Hinton Award for mentoring scientists from underrepresented groups.