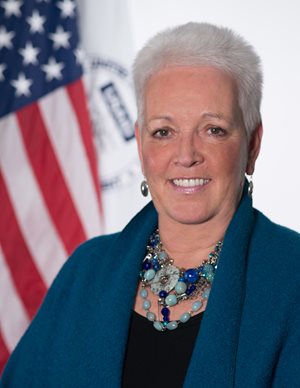 Gayle E. Smith was sworn into office as the seventeenth Administrator of USAID on December 2, 2015. As a long-time leader in President Obama’s Administration, she has helped shape and guide America’s international development policy for the past seven years, including by elevating development as a vital component of the national security agenda.

As Administrator of USAID, Smith oversees a dedicated team of nearly 10,000 professionals working to end extreme poverty, foster sustained and inclusive economic growth, and promote resilient, democratic societies all over the world. She is committed to sustaining USAID’s work to lift up the world’s most vulnerable people through promoting innovative partnerships, emphasizing science and technology, engaging with and strengthening local leadership, and maintaining a relentless focus on evaluating, measuring, and delivering results.

Most recently, Administrator Smith served as Special Assistant to the President and Senior Director for Development and Democracy at the National Security Council (NSC), where she helped manage the U.S. government’s responses to more than 15 major humanitarian crises and worked to strengthen democratic institutions around the world. She has been a driving force behind Presidential initiatives that are advancing USAID’s mission, including Feed the Future and Power Africa.

Administrator Smith was previously a Senior Fellow at the Center for American Progress, Cofounder of the ENOUGH Project, and Cofounder of the Modernizing Foreign Assistance Network. During the Clinton Administration, she served as Special Assistant to the President and Senior Director for African Affairs at the NSC, and as Senior Advisor to the Administrator and Chief of Staff of USAID.

Prior to her U.S. government service, she worked as a journalist in Africa for over 20 years, where she covered military, economic, and political affairs for the BBC, Associated Press, Reuters, Boston Globe, Christian Science Monitor, Toronto Globe & Mail, London Observer, and Financial Times. She won the World Journalism Award from the World Affairs Council and the World Hunger Year Award in 1991, and in 1999 she won the National Security Council’s Samuel Nelson Drew Award for Distinguished Contribution in Pursuit of Global Peace.

Administrator Smith is a member of the Council on Foreign Relations and has served on the boards of Oxfam America, the Africa America Institute, ASSET, USA for Africa, and the National Security Network. She has also consulted for a range of nongovernmental organizations, foundations, and governmental organizations including UNICEF, the World Bank, Dutch Interchurch Aid, Norwegian Church Relief, and the Canadian Council for International Cooperation.

She also served on the policy and advisory boards of DATA, the Acumen Fund, and the Global Fairness Initiative, and was the Working Group Chair on Global Poverty for the Clinton Global Initiative from 2005 to 2007.

She received a B.A. from the University of Colorado at Boulder.