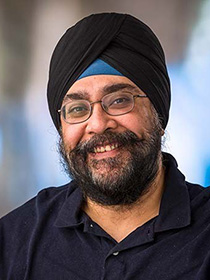 Harmit Malik got his BTech, Chemical Engineering, Indian Institute of Technology, Mumbai, India. He then moved to the US to get his PhD in Biology, at the University of Rochester, NY. In 1999, he moved to Seattle to the Fred Hutchinson Cancer Research Center (the “Hutch"), to do his postdoc with Dr. Steve Henikoff. In 2003, he started his own lab at the Hutch, where he has been ever since.

In 2009, he was awarded an Early Career Scientist of the Howard Hughes Medical Institute and a Full Investigator in 2013. Harmit Malik studies the causes and consequences of genetic conflicts that take place between different genomes (e.g., host-virus interactions, mitochondrial conflicts with nuclear genomes) or between components of the same genome (e.g., chromosomal competition at centromeric regions). He is interested in understanding these "molecular arms races" and how they drive recurrent genetic innovation, from the perspective of both evolutionary biology and human disease.

Malik and his colleagues have used an evolutionary lens to dissect and discover both primate antiviral as well as viral adaptation strategies. By taking advantage of viral ‘fossils’ in animal genomes and intense episodes of ancient host gene adaptation, his work has helped found the field of Paleovirology. His lab has been able to describe functional outcomes of ancient host-virus arms races by resurrecting both host and viral proteins from the evolutionary record. His work has received significant accolades for him and his lab members. Most recently, he was awarded the 2017 Eli Lilly Prize in Microbiology, the most prestigious prize awarded by the American Society of Microbiology, and elected to the US National Academy of Sciences in 2019.