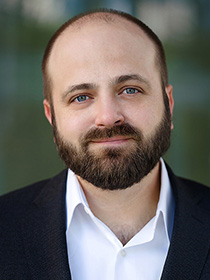 Dr. Liachko is the founder and CEO/CSO of Phase Genomics and one of the inventors of their core technology, applying proximity ligation data to metagenome deconvolution. He received his B.S. at Brandeis University in 2001, his Ph.D. at Cornell in 2007, and went on to do his postdoctoral work in the Department of Genome Sciences at the University of Washington in Seattle.  He founded Phase Genomics in 2015 and leads the organization in an executive as well as technical roles.

Phase Genomics applies Hi-C and other proximity-ligation methods to enable chromosome-scale genome assembly, metagenomic deconvolution, as well as analysis of structural genomic variation and genome architecture. They offer a comprehensive portfolio of laboratory and computational services and products, including Hi-C kits for plants, animals, microbes, and human samples as well as industry-leading genome and metagenome assembly and analysis software. Based in Seattle, WA, the company was founded in 2015 by a team of genome scientists, software engineers, and entrepreneurs. The company’s mission is to empower scientists with genomic tools that accelerate breakthrough discoveries.