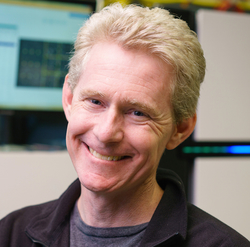 Dr. Joseph DeRisi is Co-President of the Chan Zuckerberg Biohub and a Professor in the
Department of Biochemistry and Biophysics at UCSF. He employs an interdisciplinary approach
combining genomics, bioinformatics, biochemistry, and bioengineering to study parasitic and viral
infectious diseases in a wide range of organisms, for the purpose of discovering and studying
novel or unrecognized biothreats. Early work in his lab contributed to the identification of the
SARS coronavirus in 2003. In a parallel effort, Dr. DeRisi studies P. falciparum, the causative
agent of the most deadly form of human malaria, in order to develop faster, better therapeutic
options. Dr. DeRisi was one of the early pioneers of DNA microarray technology and whole
genome expression profiling and is nationally recognized for his efforts to make this technology
accessible and freely available.
In 2004, he was chosen for a MacArthur Fellowship. In addition to being a Searle Scholar and a
Packard Fellow, Dr. DeRisi has received the Heinz Award in Technology, the Economy and
Employment, and was named an Eli Lilly and Company Research Award Laureate. He was
elected to the American Academy of Arts and Sciences in 2015, and the National Academy of
Sciences in 2016, and the National Academy of Medicine in 2017.
He received a B.A. in Biochemistry and Molecular Biology (1992) from the University of California,
Santa Cruz, and a Ph.D. in Biochemistry (1999) from Stanford University prior to joining the
UCSF faculty as a Sandler Fellow in 1999. Dr. DeRisi was a Howard Hughes Medical Investigator
from 2006-2016, which he left to take on the role of Co-President of the Chan Zuckerberg Biohub,
a non-profit medical research organization affiliated with UCSF, UC Berkeley, and Stanford
University. Dr. DeRisi is continuing to pursue efforts toward data-driven diagnostics for infectious
disease, and recently, autoimmune disorders as well.