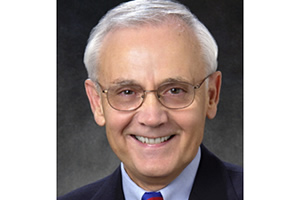 Lonnie King, D.V.M., M.S., M.P.A., A.C.V.P.M., was just appointed as the first Director a new Program on Innovation and Collaboration for the 15 colleges of The Ohio State University. Prior to this appointment, he served as Dean of the College of Veterinary Medicine at The Ohio State University from 2009 to 2015. In addition, Dr. King is Professor in the Department of Veterinary Preventive Medicine. He has also served as the Executive Dean for the 7 health science colleges at Ohio State. Dr. King received his B.S. and D.V.M. degrees from The Ohio State University. He earned his M.S. in epidemiology from the University of Minnesota and received his Master's degree in public administration from American University. Dr. King is a board-certified member of the American College of Veterinary Preventive Medicine and was elected as a member of the Institute of Medicine, the National Academy of Sciences in 2004. He currently serves as a vice-chair for the IOM Forum on Microbial Threats. He also serves on the Presidential Advisory Council to Combat Antibiotic Resistance as Vice-Chair; previously he was a member of the President's Council of Advisors on Science and Technology (PCAST) Antibiotic Resistance Working Group and was Co-chair of the Task Force on Combatting Antimicrobial Resistance sponsored by the Association of Public and Land-grant Universities (APLU) and Association of American Veterinary Medical Colleges (AAVMC). Dr. King sits on numerous private and nonprofit boards.