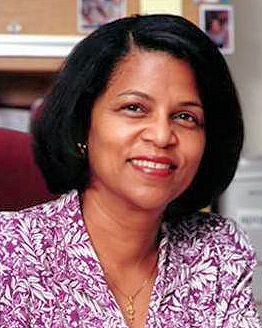 University of the District of Columbia

Marian Johnson-Thompson, Ph.D. is Professor Emerita of Biology and Environmental Sciences at the University of the District of Columbia (UDC) in Washington, D.C. and Adjunct Professor in the School of Public Health at the University of North Carolina-Chapel Hill. She was an active member of UDC from 1971 to 1992. A cancer researcher, microbiologist and educator, she is also a leader in several professional and civic organizations. While in academia, her research addressed the mode of replication and conformation of simian virus 40 DNA, as well as mechanisms involving multidrug resistance in breast cancer cells. She joined the NIEHS of the National Institutes of Health in 1992 and retired as Director of Education and Biomedical Research Development in 2008. Prior to that, she also held positions at Goddard Space Flight Center, Lawrence Livermore, General Electric Space Science Center and the National Cancer Institute, NIH.

As a member of several local, national and international committees and advisory boards that address her professional interests, Dr. Johnson-Thompson is frequently invited to address issues related to science equity, health disparities and environmental justice, and human subjects protection. She’s served as a reviewer/consultant for the NIH, NSF, EPA, Homeland Security, the Burroughs Wellcome Fund, DOD and NASA; and she serves on the board of the NC Triangle Affiliate of Susan G. Komen for the Cure where she also chairs the Grants Committee, the NC Environmental Defense Fund and the African Organization for Research and Training in Cancer. In addition to her ASM membership, she is a member of the American Association for Cancer Research, the American Society for Cell Biology, the American Association for the Advancement of Science, the Society of Sigma Xi and Susan G. Komen for the Cure Advocates in Science.

Her awards and honors are many and include the 1999 ONI Award from the International Congress of Black Women, several NIEHS and NIH Director’s Awards, the 1993 Geraldine P. Woods Award, and the 2003 Thurgood Marshall Alumni Award. Johnson-Thompson is an elected Fellow of the American Academy of Microbiology and an elected Fellow of The American Association for the Advancement of Science. She received the B.S. and M.S. degrees in microbiology from Howard University and a Ph.D. in molecular virology from Georgetown University Medical School. In 2009, she was honored with the Outstanding Alumni Achievement Award from Howard University.