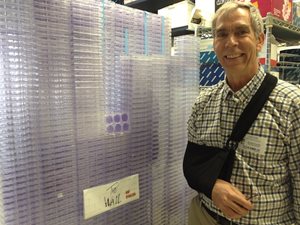 Condit began studying viruses as a graduate student at Yale University, where he conducted research on  gene regulation during bacteriophage T7 infection in the laboratory of Joan Steitz, receiving a Ph.D. in 1975.

Since 1977, Condit has used a genetic approach to study transcriptional regulation of viral gene expression and, more recently, virus assembly using vaccinia as a model system. Condit runs a relatively small research laboratory and still conducts his own experiments whenever possible. In both the laboratory and in the classroom, Condit teaches virology to graduate students, medical students and undergraduate students. Condit plans to remain at the University of Florida for the remainder of his formal career when he can once again turn his curiosity to less formal pursuits.

Condit first appeared on TWiV as a guest on episode #26, Poxviruses, in March of 2009 and after several return visits became a regular participant in February of 2010.