ASM’s Council on Microbial Sciences (COMS) is a key connection between ASM’s members and ASM’s leaders—and the place where members can get involved with their society.

In partnership with the Board of Directors, the CEO and staff, COMS keeps a pulse on new developments in microbial sciences and helps develop innovative ways to move the field and ASM forward.

COMS members are organized by 8 broad communities. Each community conducts retreats on a 4-year cycle, helping set scientific priorities and ensure effective programs and activities by identifying opportunities in the microbial sciences. Each COMS community, and their respective areas of focus, are outlined below.

Led by a Chair and Vice-Chair elected by COMS members, every part of ASM is represented on COMS:

COMS 2019-2020 Chair Michael Schmidt is pleased to announce the recipients of the 2020 ASM Conference Grants Program. This year, COMS awarded $47,000 to support 6 meetings and conferences on topics spanning Pseudomonas, microbial metabarcoding and how COVID-19’s effects on tribal communities can further education on emerging infections, among other research areas. Grants of $5,000 to $10,000 were awarded to institutions from Tsaile, Ariz. to Karachi, Pakistan.

Denise M. Akob, Ph.D., is a microbial ecologist and biogeochemist whose research aims to understand interactions between microbes and their environment in order to solve anthropogenic issues. She obtained her Ph.D. in biogeochemical oceanography from the Florida State University in 2008, and then was a Marie Curie postdoctoral research fellow at the Friedrich Schiller University Jena from 2008-2012. Akob joined the U.S. Geological Survey (USGS) in 2012 as the head of the Reston Microbiology Laboratory, and moved to the Geology, Energy, and Minerals Science Center in 2020.

Akob is an associate editor for Biogeosciences and serves on the editorial board of Applied and Environmental Microbiology and FEMS Microbiology Ecology. In addition, Akob is the councilor of the Washington, D.C. Branch of ASM. She was vice-chair of the 2021 Applied and Environmental Microbiology Gordon Research Conference, and received a USGS Early Career Leadership Award in 2017 for her outstanding service and scientific achievements in representing the agency. 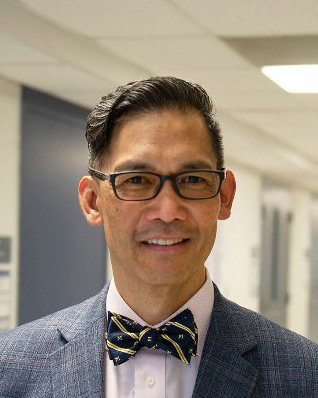 Dr. Vincent Young is the William Henry Fitzbutler Collegiate Professor in Internal Medicine/Infectious Diseases Division and Microbiology & Immunology at the University of Michigan Medical School. He received his undergraduate degree from the Massachusetts Institute of Technology in 1985 and received his M.D. and Ph.D. in microbiology and immunology from Stanford University 1992. He completed clinical training in internal medicine and infectious diseases at the Massachusetts General Hospital. After an initial faculty position at Michigan State University he joined the University of Michigan in 2007.

Young has a long-standing interest in the pathogenesis of bacterial infections of the gastrointestinal tract and the role of the normal microbiota in human health and disease. As part of the NIH Human Microbiome Project, Young led a team that studied the role of the microbiome in inflammatory bowel disease. Current research in the Young Lab includes a "team science" effort to understand the pathogenesis Clostridium difficile infection by an integrated approach combining clinical research, bacterial genomics, microbial ecology and immunology/host response projects. He is also leading a group of investigators that is developing the use of stem cell-derived intestinal organoids as a novel alternative model system for the study of enteric disease agents.
View all Council Members