Who is your favorite microbiologist? That was the question we posed for this year's Agar Art Contest. We wanted to see who our artists would choose: Well-known historical figures? Underappreciated or ignored scientists? Personal colleagues?

The nearly 200 responses we got back covered the entire range. There are works commemorating microbiology legends such as Louis Pasteur, Robert Koch and Antonie van Leeuwenhoek. There are homages to underappreciated microbiologists like Ruth Ella Moore and Fanny Hesse. There are touching tributes to colleagues, friends and family members. And our winners from around the world exemplify this diversity. Check out the works of art below, read the stories, and see our Flickr page for the full list of entries.

Microbes Grown on Agar by Participants Who Have Access to, and Created Their Work in, a Formal Laboratory Setting Like a University or Industrial Lab


The theme for the current year agar art is "Your Favourite Microbiologist."  The present and future in any field relies mainly on the strong fundamentals of the past. The best example for this is Rosalind Elsie Franklin. She is popularly known as "Dark Lady of DNA," as she remained the most controversial female in the field of science. She was also known as unsung hero of DNA, as she was not recognized promptly for her contribution in the discovery of DNA.

The image "Photogragh 51," depicting the double helical structure of DNA by Franklin using X-ray crystallography experiment was a crucial finding in the discovery of the genetic structure. Being a female,  she had to face a lot of discrimination, and her scientific activities were not appreciated. Her famous quote "Science and everyday life cannot and should not be separated," speaks about her determination and commitment to her work. She is the best role model for budding scientists and we have tried to potray her in the agar plate as a tribute to her priceless contribution, which has been the basis of modern diagnostic microbiology.


Fanny Angelina Hesse (1850-1934), was an American laboratory technician and scientific illustrator. In 1881, while working with her husband Walther Hesse in Robert Koch's laboratory, she introduced the use of agar for culturing microorganisms, a technique still widely used. Maybe she never imagined that this innovation would change how thousands of different microbes can be cultured for a wide array of purposes, including bioart production. In fact, without Fanny’s notable contribution, this agar art contest would not be possible. On these agar plates we have used 4 bacterial strains to portray Fanny Hesse, in a manner that resembles Andy Warhol's pop art portraits. In this way, we want to pay a humble tribute to a point person in the history of microbiology.

See all of the Professional category entries

How Did I Meet Odo Feliks Kazimierz Bujwid?


I study veterinary medicine. That is why I was interested in the first Polish woman who, in 1923, became the first veterinarian in Poland. While exploring her figure, I discovered that behind her achievements is a great man of Polish science, her father Odo, born on November 30, 1857. A man who not only overworked his childhood traumas, but also made them his inspiration. His parents' alcoholism, the need to work at the age of 15, and thus difficulties at school, did not end his remarkable academic career.

His motivation was stronger than unfavorable circumstances. Leaving aside his social life, theater and games, he spent all his free time studying. Eventually, he graduated from school, passed his high school diploma and decided to enroll in the Faculty of Medicine at the Imperial University of Warsaw. Also there, he encountered difficulties, he had to prepare himself for the entrance exams.

All these adversities shaped him as a diligent scientist who quickly gained recognition in the world of science. Thanks to his work " Mikroskopia i mikrochemia plwociny w chorobach dróg oddechowych" ("Microscopy and microchemistry of sputum in respiratory diseases”), which he sent to Robert Koch, he received an invitation from him to a 6-week course. He also met Louis Pasteur, with whom he spent 3 months at the Institute, finally receiving 2 rabbits vaccinated with rabies. Thanks to the former, Odo created the first bacteriological laboratory in Poland in his Warsaw apartment. Pasteur, in turn, enabled Bujwid to introduce a vaccine against rabies and to open the first Polish pastoral vaccination station.

Scientific activity is not the only interest of Odo. He also took care of building waterworks, introducing hygiene in medical centers and even the emancipation of women.

Why am I inspired by Bujwid? Because it shows that scientific development is primarily work and determination, as well as joint action. It also proves that the family environment and difficulties do not determine our choices, if we actually make our scientific work our passion. Odo is an example that, as people of science, we are the next eyelet of a long chain that is developing for the good of mankind. A bacteriologist, doctor, social worker, although for me a sensitive husband and father, who made the good of man his way of life. As Odo sums up his life: “But I did not waste my life, I managed better than many of my surroundings. I've been through a lot and lived to such a late age, and I can still see what others are doing after me and how the things that I love develop.”


“Science has no boundary; knowledge is something that belong to humanity; and if this knowledge spread through different fascinating modes, it enlightens the World.”

Louis Pasteur (bottom left and bottom right) was chosen for this theme because of his core contribution and initiating contribution for microbiology. What inspires our team the most is vaccination development, as it protects us today from many serious and potentially deadly disease. The second microbiologist is Robert Koch (top right). He carried the mission of Louis Pastuer; he put bacteriology on the path to becoming a modern science. He identified the germs that cause cholera, anthrax, septicemia and tuberculosis and developed many innovative techniques in microbiology. And last we choose Rita Cowell (top left), current microbiology researcher from University of Washington. She is recognized for her study of global infectious disease spread and its impact on global health. Cowell discovered that cholera exist in a dormant form that was previously not thought to exist.

See All of the Creator Category Entries


My favourite microbiologist is Esther Miriam Zimmer Lederberg. She was an American microbiologist and a pioneer of bacterial genetics. Esther Lederberg was a major pioneer of bacterial genetics. She discovered the lambda phage, a bacterial virus which is extensively used as a tool to study gene regulation and genetic recombination. She also developed the replica plating technique, which is utilized to segregate and analyse bacterial mutants and track antibiotic resistance.

As a woman in a male-dominated arena and the wife of Nobel laureate Joshua Lederberg, Esther Lederberg fought hard for professional recognition. Despite her foundational discoveries in the field of microbiology, she was never presented a tenured position at a university. Textbooks often disregard her work and featured her accomplishments to her husband. In part this reflected the wider discrimination against female scientists at the time.

Nevertheless, Esther Lederberg’s contributions laid the groundwork for much of the genetics work done in the latter half of the twentieth century. Today, the lambda phage is a key tool in molecular biology. Because of her work, she is considered to be a pioneer in bacterial genetics. In 1956, the Society of Illinois Bacteriologists awarded the Pasteur Award to both Joshua and Esther Lederberg, given in recognition of their contribution to microbiology, particularly for their fundamental studies in bacterial genetics.

I hope to inspire young people across the world to discover a love of science and inform the public about scientists who make new discoveries possible. Therefore, I created an artwork to pay tribute to Esther Lederberg, my favourite microbiologist.

See All of the Open Category Entries

Entries From Our Junior Microbiologists, Aged 12 and Under


This shows Ruth E. Moore. She was the first black woman to earn a Ph. D. in the natural sciences! I chose her because she was a clear inspiration in her field. To make this, I used nonpathogenic Micrococcus luteus bacteria. I used a stick, dipped it into a liquid, and I poked the bacteria. After class was over, I let it sit for the day and the next class I used pink gel to set it.

My Favourite Microbiologist, My Mother!


My favourite microbiologist is none other than my mother! My mother is a microbiologist and lecturer at ITE-CE. She studies and researches on microorganisms such as bacteria, protozoa and fungi. At work, my mother always wears her white lab coat and gloves when she is in the laboratory. Besides, she is also a passionate teacher who creates effective learning environments to increase learning potentials of their students. At home, we love to read books on microorganisms and she will tell me interesting stories about the big world of really tiny microbes. My mother is my role model, she inspires and motivates me to become a microbiologist just like her!

See All of the Kids Category Entries

We also had 167 miscellanous entries this year. Check them out below and on our Flickr page. 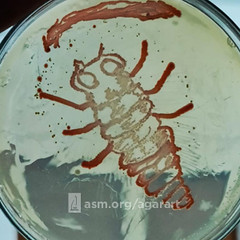 We had one video entry: "Life in a drop" by Khrystyna Chuberkis from Ivan Franko National University of Lviv in Ukraine.

To request copyright permission to republish or otherwise use Agar Art images, please visit Copyright Clearance Center’s (CCC) Marketplace website. You will be contacted by an ASM representative once your request has been received. You can learn more about Marketplace here.