How Pathogens Survive and Thrive in a Changing Climate

Study after study has arrived at the same conclusion: A changing climate will influence the health and well-being of humans and their environments. Shifts in temperature, precipitation, humidity, CO2 concentrations and nutrient availability can increase the risk of vector-borne and zoonotic diseases, both in new geographic areas and in places where such diseases are already endemic or eradicated.

A systematic literature review published in August 2022 predicted that 58% of human pathogenic diseases are likely to worsen with climate change. The impact of climate change on global health is expected to be so severe that the World Health Organization has termed it "the single biggest health threat to humanity," estimating that the direct health costs will total between $2 billion and $4 billion by 2030 due to increases in deaths from malnutrition, malaria, diarrhea and heat stress, among other factors. Scientists expect to see the highest burden of climate-influenced diseases in low-resource countries and communities. People who are immunocompromised or who have preexisting respiratory, nutritional and seasonal allergies will also be at higher risk.

In general, milder weather is more conducive to microbial survival and reproduction. Yet, according to Dr. Arturo Casadevall, chair of the W. Harry Feinstone Department of Molecular Microbiology and Immunology and a professor at the Johns Hopkins Bloomberg School of Public Health, the problem isn't simply warmer weather on average. "People are saying 'the world is only warming by 1 degree'; that's not the right way to think about it. Every time you have a really hot day, it's a selection event," he said. As the climate changes, microbes must adapt to the "new normal," presenting opportunities for pathogens to move about and evolve in unknown ways that may increase virulence and host range. As humans move to new environments to avoid climate change impacts, they may also encounter novel pathogens against which they lack natural immunity. Human evolution simply cannot keep up.

"One of the reasons why [humans] don't [currently] worry about fungal disease … is because we're warm," Casadevall said. "Most fungi can't grow at our body temperatures," but rather infect room-temperature creatures, like reptiles and amphibians, or only impact humans on the skin level. However, "fungi are adapting," he cautioned. "As the world gets hotter, they are learning to grow at higher temperatures."

Casadevall's work over the last decade describes the ability of the fungus Candida auris to adapt and survive at high temperatures (above 37 degrees C), breaking the thermal exclusionary zone otherwise protecting humans from infection. "The concern with climate change is that the pillar that is temperature can be overcome if the fungi adapt," he said, especially given research showing that the average human body temperature is declining.

Casadevall's climate-based hypothesis arose from the fact that 3 unique isolates of C. auris have appeared simultaneously on 3 continents, with temperature tolerance being the common denominator. This hypothesis is seemingly backed by research in India that found that C. auris isolated from a populated beach had a higher temperature tolerance than a separate isolate from a marsh, indicating that the fungus might have adapted to different environments.

Source: American Society for Microbiology. To fully understand pathogens, it is helpful to understand the ecology of their host or vector organisms. Dr. Karla Satchell, Northwestern University Feinburg School of Medicine Professor, specializes in studying V. vulnificus, a marine bacterium found in shellfish and acquired by eating contaminated seafood. Less often, V. vulnificus can also infect wounds and cause necrotizing fasciitis, also known as "flesh-eating disease." "Vibrio [vulnificus] likes to grow in warm water (like the Gulf Coast). The number of days that are warm enough to allow bacteria to grow is increasing, and it's expanding into further northern regions … it's now pretty common in the Chesapeake Bay, and we are seeing incidences in Boston because the water is warm enough for multiple days per year," she said.

Satchell explained that V. vulnificus also only grows within a narrow range of salinities, but temperature-induced desalination has allowed Vibrio growth in the previously saltier Mediterranean Sea. An increase in Vibrio infections could have wide-reaching economic impacts on the fishing and shellfish industries as well. This could be particularly relevant in the summer during "beach season" and in coastal communities. Vibrio infections also follow natural disasters, with Florida reporting an increase in cases that occurred from the storm surge entering their homes or during post-storm clean-up during Hurricane Ian.

Meanwhile, on land, increasing temperatures have been shown to accelerate tick development, explained Michigan State University Professor, Dr. Jean Tsao at Microbe 2022. A warming climate also facilitates the northward spread of mammals that carry ticks, such as the whitefooted mouse, which has been implicated in the establishment of Borrelia burgdorferi, the causative agent of Lyme disease, into new geographic areas. Similar phenomena have been observed in I. ricinus in Northern Europe, as well as vector movement toward the South Pole in Chile and other locations in the southern hemisphere.

Tsao explained that ticks consume only 1 blood meal per life stage, and they only feed in favorable temperature and humidity conditions. Researchers have noted changes in development rates and peak host-seeking periods between ticks in the Midwest versus in the Northeast, with the latter's larvae peaking in late fall. The cooler autumn weather in the Midwest, which lacks the buffer of East Coast winds, drives larvae to enter diapause (suspended development) shortly after and delay their feeding until spring, whereas Northeast ticks remain active. Because Lyme disease only spreads by vertical transmission, climate changes that impact life cycles may also impact disease incidence if nymph and larval seasons overlap. For instance, the maintenance of B. burgdorferi typically relies on larvae feeding after an infected nymph in order to acquire the bacteria.

"More Americans are at risk than ever before as mosquitoes and ticks are moving into new areas of the country, increasing cases and geographic ranges of vector-borne diseases," said Dr. Christopher Braden, the Acting Director of the Centers for Disease Control and Prevention (CDC) Center for Emerging and Infectious Zoonotic Diseases, at an ASM webinar. Since 2005, the number of vector-borne disease cases in the U.S. has doubled, and 10 novel pathogens have been discovered. The last decade has seen the first domestic U.S. outbreaks of mosquito-borne chikungunya and Zika viruses, and the largest single West Nile Virus outbreak in the U.S. occurred in Phoenix in 2021, affecting up to 5% of the resident population.

Scientists are investigating ways to remedy these difficulties retroactively by referring to historic climate change data from weather satellites or historical anecdotes from past outbreaks. Dr. Kathleen Treseder, the Howard A. Schneiderman Endowed Chair and a biology professor at University of California, Irvine, has monitored an increase in Valley Fever, a pneumonia-like disease caused by Coccidioides fungi, across the southwest U.S. over the last decade. Because the disease is not contagious and is instead acquired from inhaling the fungus from the environment, it was suspected that the "silent epidemic" has worsened due to hotter, drier, dustier conditions caused by climate change. For their study, Treseder's students wrote to every public health agency, county by county, to obtain case counts of Valley Fever every month over a 10-year span. They then connected this information to weather conditions in those places and times, using data from the National Weather Service.

"With so much data, we had to be very careful with our approach," Treseder said. "We wanted to look for relationships that made sense ecologically and biologically, and we needed to make sure relationships were robust. We wanted to be able to drill down and make sure climate was our main driver." Treseder explained that she also modeled cases against agricultural land use and economic variables to ensure that climate was, in fact, the key causative agent.

"There is no linear relationship between climate and infectious diseases," said University of Florida professor of environmental engineering, Dr. Antar Jutla. His research team develops predictive modeling intelligence to forecast how infectious pathogens will respond to geophysical and sociological processes, focusing on the underling hypotheses rather than curve-fitting models. "We are not always right, but once the hypothesis is supported with data, we are confident in our approaches to predict disease risk," he said. "The other philosophy of our research group is that we cannot separate the environment in which humans work, live and survive. Therefore, we need to understand how humans behave under certain weather/climate conditions."

Predicting and Modeling the Future

90th percentile future Valley Fever incidence
Source: NIH National Library of Medicine. Accurately predicting future outbreaks or climate conditions sounds impossible, let alone forecasting where, when and to whom these events might occur. Although predicting outbreaks is not a perfect science, Treseder used her observations from the past to anticipate which temperatures and precipitation amounts could be most conducive to the next Valley Fever outbreak. "We have been able to come up with a rule of thumb [that] if a certain area [is] above a certain temperature and below a certain precipitation, we can say outbreaks would be occurring," she said. "We put this into a climate simulation, and found that over the next century, Valley Fever will move to the Plains states, a whole new region, where people have not been exposed." However, as she acknowledged, much of the future depends on human behavior. Therefore, her models include predictions under a "best case" as well as a "business as usual" scenario. "For that, it depends on how optimistic you feel in humans to make a change," she said. "But even under a best-case scenario, we still expect a 50% increase in the geographic extent of the disease, and in the worst case, it reaches the Canadian border."

Even if causation cannot be shown in nature, "we know Vibrio incidences go down in the winter. That is a correlative argument … but it's a pretty good one," said Satchell. Ideally, scientists would be able to use climate or environmental data to predict when and where Vibrio vulnificus risk may be highest, and respond with corresponding policies and public warnings. However, the CDC has not recently updated its Cholera and Other Vibrio Illness Surveillance website, perhaps in part because cases are relatively rare in the U.S. While they may be rare, Vibrio outbreaks can be economically devastating to tourism and shellfish industries. "This problem isn't going to go away until scientists start studying it, and the kind of scientists that study it also understand its pathogenesis," she said.

This is where the integration of knowledge from engineering and microbiology can lead to more disease-resilient human societies/communities. Jutla's research about waterborne pathogens is intended to inform water system and sanitation design. "Success is defined in several ways when dealing with infectious diseases. It could mean saving 1 human being, communities, regions or [a] country," said Jutla. "Generally, it is not possible to measure success directly in infectious disease domains, but if an outbreak can be prevented, it is a success."

The American Academy for Microbiology, ASM's honorific society, has embarked on a 5-year scientific portfolio to bring microbiologists into conversations about public health and climate change. ASM Microbe 2023 also will feature a climate change guest track. To learn more and get involved, visit our resource page.

Ashley Mayrianne is the Advocacy Communications Coordinator at the American Society for Microbiology. 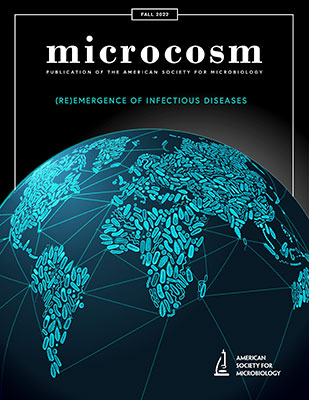