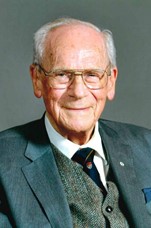 Societies and their journals, particularly the Canadian and American Societies, were consistently important to Dr. Murray over the years. He was chairman of the Founding Committee for the Canadian Society of Microbiologists, 1950-1951 and Founding President, 1951-1952. The Society, he said, was "a much-needed catalyst and unifier for the diverse applied and basic microbiologists of the country." He remained an active member of the Society throughout his scientific career and was elected an honorary member in 1985.  He also persuaded the National Research Council of Canada that a microbiology journal was a justifiable publication and was appointed the founding editor of the Canadian Journal of Microbiology, 1954-1960.

Prior to this appointment, he was a member of the editorial board of Journal of Bacteriology, 1951-1954, and again from 1980-1986.  His involvement as Editor of Bacteriological (later Microbiological, then Microbiology and Molecular Biology) Reviews, 1969-1979, increased his interest in the affairs of the American Society for Microbiology. He was elected President, 1972-1973, and an honorary member in 1988. He was also elected an honorary member of the Society for Applied Bacteriology in 1988.

One of Dr. Murray's passions in life was taxonomy. He inherited this interest honestly from his father, E.G.D. Murray, who was a trustee of Bergey's Manual of Determinative Bacteriology, 1936-1964. After his father's death in 1964, he was asked to join the Bergey's Manual Board of Trustees, and thus began another long association of a Murray with Bergey's Manual. He was Chairman of the Board of Trustees from 1976-1990. He was a member of the International Committee for Systematic Bacteriology (International Association of Microbiological Societies) since 1962, and chairman from 1982-1990. He was elected an honorary member of ICSB in 1990. He was associate editor of the International Journal of Systematic Bacteriology, 1982-1990 and editor from 1991-1994. In 1993 he was awarded the Bergey Medal, given by the Bergey's Manual Trust for contributions to bacterial taxonomy.

Dr. Murray was an ardent contributor back to science, in the form of leadership in societies and on editorial boards. He wrote in his autobiographical article (Annual Reviews in Microbiology 1988 42: 1-35) about his years of service as a member of journal editorial boards: “…I learned the basics of editing from experienced colleagues and by doing it.”; “…a scientific editor’s crucial job was not just to adjudicate the reports of referees but was to help the authors to do their best.”; “It was no mean exercise in diplomacy to deal with the sensitivities of the undoubted authorities in their fields, both authors and referees, who could produce not only an appalling text but also a distressing narrowness of view.” To those who knew him, this was a reflection of his “tell it directly like he saw it” attitude along with his challenge to everyone to look at the bigger picture in all their science. He was a giant presence never afraid to give his valuable input.

It is a challenge to summarize Dr. Murray's interest in and contributions to research in microbiology. He concentrated on the structure and function of components of bacterial cells, bacterial cytology, and bacterial taxonomy. He made major contributions to the combination of information from electron microscopy with biochemical analysis of structures (notably paracrystalline S-layers), biological and systematic studies of radiation-resistant bacteria and overall assessment of problems in the taxonomy of bacteria. His contributions to microbiology continued as a member of the Board of Directors of the Canadian Bacterial Diseases Network of the Centres of Excellence (1989-1998). He received one of the most rewarding collegial recognitions when a new species of Deinococcus was named after him in 1997 (Deinococcus murrayi) and a new genus (Robertmurraya) in a clade of Bacillus species in 2020.

He was active in his later years as a Professor Emeritus and never failed to ask stimulating questions at department seminars. He continued to be an inspiration to students and faculty members. His presence will be missed.