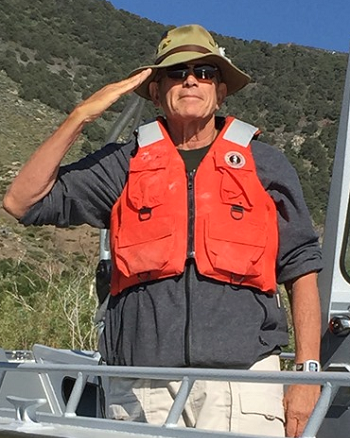 Dr. Ronald Seth Oremland (known to all as "Ron"), emeritus Senior Research Scientist (ST) at the U.S. Geological Survey (USGS) in Menlo Park, Calif., a fellow of the American Academy of Microbiology, and recipient of the 2020 ASM Award for Environmental Research, passed away from acute leukemia on Sept. 16, 2021, at the age of 74. Ron was a towering figure in environmental microbiology and biogeochemistry whose work continues to influence others, from long-time colleagues to students just entering the field. Ron is survived by his wife Francine (Fran), her daughter Veronica and her family, and by his devoted nephews Lenny and Howard.

Ron was born in 1946 in Brooklyn, N.Y. to Murray and Rose Oremland and raised with his older brothers Mel and Allen. His early experiences as a Coney Island lifeguard forged lifelong leadership skills and a devotion to Speedo swimwear. He studied biology at Rensselaer Polytechnic Institute, where he was greatly influenced by a geomicrobiology course taught by Henry Ehrlich. After graduating in 1968, Ron began graduate studies at the University of Miami Rosenstiel School of Marine and Atmospheric Science where he developed a passion for anaerobic microbiology. Graduate school was interrupted for 3 years while Ron served as an active-duty officer in the U.S. Navy. He returned to Miami and completed his studies under Dr. Barrie Taylor. After receiving his PhD in 1976, Ron moved to NASA Ames for a postdoc with Dr. Melvin Silverman.

Over his 42-year career at the USGS, Ron made significant contributions to the field of environmental microbiology through his studies of biogeochemical cycling in extreme environments, especially alkaline, saline lakes. In carbon cycling alone, his contributions included identifying novel metabolic pathways for methane formation, promoting specific inhibitors of microbial processes, discovering previously unknown routes of C1 metabolism of methyl halides, and establishing the concept of "acetylenotrophy," the microbial metabolism of acetylene. Ron also made breakthrough discoveries of how the oxyanions arsenic, selenium, antimony, and tellurium are redistributed in aquatic systems by microbially mediated oxidation and reduction. His pioneering work impacted the understanding of processes in natural systems, as well as contaminated environments, and vastly expanded possibilities for the habitats that could harbor life in the universe.

Ron was a prolific and entertaining communicator who, in addition to publishing more than 200 peer-reviewed papers in disciplines as varied as microbiology, astrobiology, limnology, geochemistry, and genomics, could carry a tune, tell tales and light up a stage. He published several highly influential papers in Science and other journals that challenged existing paradigms of microbial processes and metabolisms. Ron published more than 50 papers in ASM journals including Applied and Environmental Microbiology, Journal of Bacteriology, mBio, and Microbiology Resource Announcements. He held 6 patents that included inventions for selenate removal from wastewaters and agricultural use of methyl bromide, and studied many more processes with technological applications. Ron discovered and named no less than 5 microorganisms and will always be memorialized by his bacterial namesake Alkaliphilus oremlandii.

In addition to his ASM honors, Ron was an elected Fellow of the American Geophysical Union (AGU), the American Association for the Advancement of Science (AAAS), and the International Symposium for Environmental Biogeochemistry (ISEB). As a part of his scientific service, Ron served as a member of the Editorial Board of Applied & Environmental Microbiology from 2013-2015. He served as president of the ISEB from 2001-2007, served on 4 Editorial Boards, and was a member of the Scientific Advisory Board for the Max Planck Institute for Terrestrial Microbiology in Marburg, Germany. Ron was an adjunct professor at the University of California, Santa Cruz and the University of Nevada, Las Vegas.

During his 42-year USGS career, Ron mentored and supervised more than 28 postdocs, students, and technicians. In his final years, Ron authored a memoir, It Was a Stark and Dormy Night (2021) about his days as a Navy officer, and a series of essays chronicling his lifetime of adventures in environmental microbiology (see related links below). These essays capture the essence of Ron's exuberant personality and are particularly encouraging to early career researchers looking to chart their own path in science. Ron's wit, energy, and joie de vivre were infectious, inspiring many students to pursue careers in environmental microbiology. It pleased him that many of these protégées went on to successful careers in government, academia and elsewhere.

Ron will be remembered for his loyalty, generosity, and his larger-than-life personality. Ron had a photographic memory and a wicked sense of humor, which often led to interesting results. We will surely miss Ron regaling us with a Tom Lehrer song or his version of an operetta from Gilbert and Sullivan to begin or end a lecture on acetylene or a seminar on arsenic in Mono Lake. Holidays won't be the same without his festive cards, often filled with Yiddish idioms. Ron Oremland was one of a kind, and he will be dearly missed.