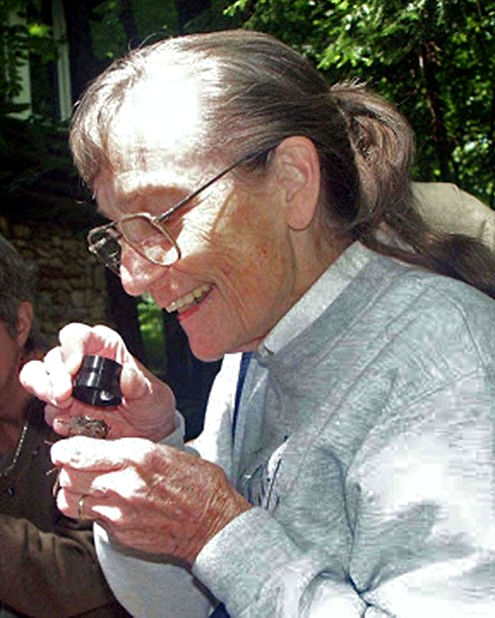 Prof. Poindexter had retired in 2007 after 43 years of research, teaching and mentoring, the last 16 years spent at Barnard College, where she was Professor Emerita of the Biological Sciences. In honor of her contributions to the biology of the Caulibacter species, one of the bacteriophages that preys on this species has been renamed Poindextervirus. In 2012, Poindexter was named a Woman of Distinction by the New York State Senate, an honor recognizing women living and working in New York, and who had "greatly enriched the quality of life in their communities and beyond."

Jeanne Stove Poindexter was born in LaMoine, Illinois and raised in New Castle, Indiana. It was while growing up in New Castle that she first met her husband-to-be of 56 years, Porter. After obtaining a Bachelor's degree in Biology at Indiana University Bloomington in 1958, she entered graduate school at UC-Berkeley. There, she joined the laboratory group of the late Roger Stanier, earning a Master's degree in 1961 and Ph.D. in 1963. After completing her Ph.D., she continued her research as a postdoc in the laboratory of Cornelis "Kees" van Niel at Stanford's Hopkins Marine Station by Cannery Row in picturesque Pacific Grove. This was the final year of van Niel's research program before his retirement; during this period, Jeanne participated in the last of his advanced and internationally famous summer microbiology courses, ending what was, by all accounts, a pedagogically historic era.

After completing her post-doctoral training, Poindexter served as an Assistant Professor of Microbiology at her alma mater, Indiana University Bloomington (1964-1967), after which she moved to New York City. There she served as an Associate Research Scientist at New York University (1969-1971) and an Associate Professor of Biology at Medgar Evers College in Brooklyn (1971-1975), before taking a respite from academia to dedicate herself to research and family as an Associate Member of the Public Health Research Institute (1976-1986). She returned to academia in 1986 as an Associate Professor of Biology at Long Island University (LIU) in Brooklyn. In 1991, she left LIU to join the faculty of Barnard College in New York, where she gained tenure and remained on the faculty until her retirement in 2007.

In 1978, Poindexter was asked by the late Holger Jannasch to join the faculty of what was then called the Microbial Ecology Summer Program, offered by the Marine Biological Laboratory (MBL) in Woods Hole, Massachusetts. She did so for 7 summers (1978-1984), while also becoming a member of the MBL Corporation. The program, which was named a "Milestones in Microbiology site" by ASM in 2013, was inspired by the summer courses that had been offered in Pacific Grove by van Niel. It has subsequently been called Microbiology: Molecular Aspects of Cellular Diversity, and, since 1991, Microbial Diversity. Poindexter returned again as faculty for an 8th and final summer in 2005. One outgrowth of her time in Woods Hole was a book series of three volumes, Bacteria in Nature, that she co-edited with her late colleague Edward R. Leadbetter, who was a fellow postdoc during their time in van Niel's laboratory in 1963. During her summers in Woods Hole, she began her quiet but decades-long mentorship of Leadbetter's son, Jared, who would later himself become an academic scientist and a co-Director of that very same program in Woods Hole.

It was while working on her graduate degree with Roger Stanier at UC-Berkeley that Jeanne developed her life-long research interest in and passion for Henrici's stalked bacteria, those belonging to the genus Caulobacter. At that time, although not infrequently encountered in microscopic samples and represented by a single isolate, it was a less well known microbe. She would forever change that with two landmark research publications: one in Nature in 1962 (as J. L. Stove); the second in Bacteriological Reviews (now ASM's MMBR) in 1964.

Upon joining Stanier's laboratory, she had initiated a fierce program of isolation of dozens upon dozens of strains of different caulobacters from diverse aquatic, soil, and marine samples. She characterized them, proposed many new species of them, and perhaps most importantly, watched many single cells of them, carefully, over long periods. She documented in detail the now textbook lifecycle of an isolate she named Caulobacter crescentus, showing that non-growing, motile cells ultimately attached to surfaces, grew their characteristic stalks, and never moved again.  She showed that it was only these attached mother cells that grew, generating the motile daughter cells that would disperse, ultimately attaching and differentiating elsewhere.

Poindexter developed simple and straightforward protocols for synchronizing populations, generally a non-trivial task to accomplish with bacteria. Perhaps most importantly to the advancement of biological science at large, she determined that the stalk always formed at the end of the cell to which the flagellum had been attached, and that this flagellum always formed at the end of the daughter cell distal to the division plane formed with mother cell. Thus, C. crescentus had a true cell cycle; moreover, its cells differentiate into different and distinct cell types, and these cells exhibit distinct polarity, all of which are hallmarks of developmental biology.

After her initial Nature study, Stanier and van Niel convinced ASM to publish the second and subsequent chapters of her thesis research as a single, 65-page research monograph in Bacteriological Reviews in 1964, and with that, a field was born. Within a few years, several laboratories began initiating their own studies on the developmental genetics of C. crescentus. In 1981, Poindexter published her seminal review on Caulobacter in what had become Microbiological Reviews (now MMBR) in 1981. In the six decades since she completed her initial landmark studies, more than 2,000 published research studies have focused on C. crescentus, almost every one of them using wildtype Strain CB15, one of Poindexter's isolates from her thesis research. More than 40 active research laboratories around the world currently focus their interests and efforts on this organism. While the majority of those studies by others have broadly and deeply advanced understanding of the developmental genetics and cell biology of C. crescentus, her own subsequent research over the 40 years broadly focused on diverse aspects of phosphate physiology and the microbial ecology of Caulobacter (as well on bacteriophage that prey upon it, one of which has recently had been named after her, Poindextervirus).

Prof. Poindexter had a profound impact on many. Her students at Barnard revered her and remember her as being deeply committed to education. She shared her sense of humor, kindness, passion and outlook on life while bringing the world, in particular the microbial world, to life. Students recall her as often exhibiting the giddiness of a child while, at the same time, sharing her sage wisdom as an elder. She valued her wrinkles as she felt that they made her look "venerable." She brought the academic traditions of Delft, Pacific Grove, and Woods Hole to bear on her students, showing them the microbial light by sharing stacks of petri dishes, streaked out with luminescent bacteria, illuminating an otherwise darkened room. Her classes often enjoyed buffets of diverse cheeses, to celebrate and underscore the diversity of microbial physiology and fermentations; meanwhile, she would often enjoy some popcorn as she commented: "Mmmm…triploid treat." "Dr. P," as she was known by many of her students, saw the world through its microbes. Her eyes sparked with excitement as she drew many connections to celebrate diversity and "the ties that bind."

"The world is a better place because of her, and she will be missed by many," commented Talia Swartz, one of the many individuals mentored by Prof. Poindexter.