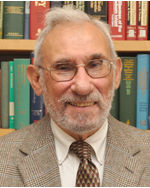 Julius (Julie) Schachter, a leading expert on chlamydia and trachoma, a chlamydia-related eye infection, died on December 20, 2020, due to complications caused by COVID-19.

Schachter was born in the Bronx in 1936. He was the first in his family to attend college, receiving his bachelor’s degree in chemistry from Columbia University in 1957, his master’s degree in physiology from Hunter College in 1960, and his Ph.D. in bacteriology from the University of California, Berkeley, in 1965. After his Ph.D. studies, Schachter joined the University of California, San Francisco (UCSF), as an assistant research microbiologist. He remained at UCSF for 55 years, later becoming a professor of laboratory medicine.

Schachter’s research focused on the epidemiology and clinical manifestations of chlamydial infection, along with the evaluation of diagnostics and treatments for chlamydial infections. A major portion of his research was on trachoma, a contagious bacterial infection caused by Chlamydia trachomatis. Up until the 1990s, trachoma was a leading cause of preventable blindness. In 1999, Schachter’s research findings demonstrated that mass distribution of the oral antibiotic azithromycin was effective in treating the disease at a community-wide level in places where trachoma was epidemic.

Dr. Schachter published more than 500 articles on his studies of Chlamydiae. He served as the Director of the World Health Organization (WHO) Collaborating Center for Reference and Research on Chlamydiae from 1978 to 2003 and Chair of the Sexually Transmitted Diseases Diagnostic Initiative of the UNAIDS Programme from 1997 to 2001. He was an active member of the American Society for Microbiology (ASM) and a fellow and former governor of the American Academy of Microbiology. He was actively involved in research and writing throughout his life, reportedly working on at least 4 manuscripts at the time of his death.

For Additional Information:
Obituary published by The Scientist