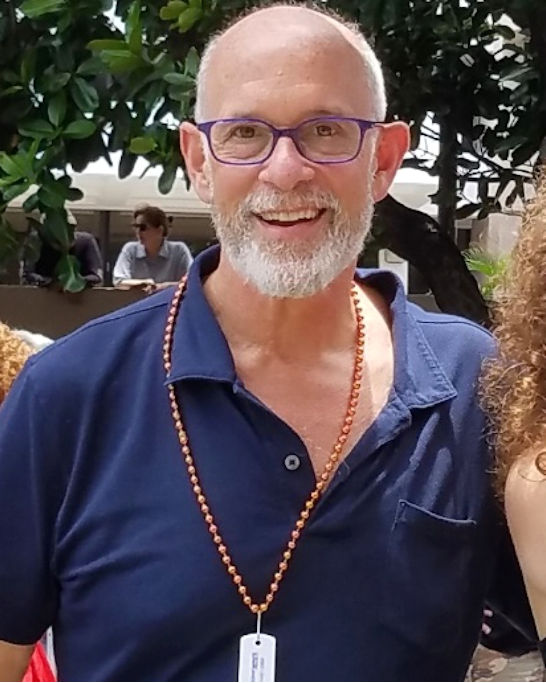 Toby Merlin, MD, died on Saturday, Aug. 18, 2018, his 66th birthday. He had recently been diagnosed with metastatic kidney cancer. Toby was a 20-year member of the American Society for Microbiology, and oversaw the ASM/CDC Fellowship program.

Toby leaves behind his husband, Jim Little; his dogs, Bunny and Pedro; siblings; nieces and nephews and many close friends and colleagues.

Toby grew up in Atlanta, earned a degree in philosophy from Yale University, received his medical education at the University of Florida, and specialized in clinical pathology through additional training at Stanford University and the University of New Mexico (UNM). He spent 2 decades in Albuquerque, where he and Jim met. After building a successful career as tenured professor at UNM School of Medicine and chief medical officer of Lovelace Health Systems, Toby and Jim moved to Atlanta, where, according to his brother, Marc, his "central career as a proponent of public health took off."

His brother summarized Toby's passion for public health, saying: "While most of us are familiar with how the military defends our country, Toby was a representative of a different and lesser-known approach. He recognized that we also need to employ our intellect, scientific prowess, and, yes, compassion, to help make us safer from infectious disease here and abroad. He knew, and sought to build coalitions around the reality that our nation, and all nations, are only safe and secure when health is prioritized and protected."

Toby's work at CDC embodied that belief. He served on multiple rotations as Incident Manager of several emergency responses over the years, including: the H1N1 outbreak in 2009, the Ricin Response in 2013, the Ebola outbreak in 2014, the DoD Sample Investigation in 2015, and the Zika response in 2015. But even in times when the EOC was not activated, Toby was dedicated to strengthening public health systems, especially through laboratory capacity, in the United States and around the world. Early in his CDC career, Toby worked to establish laboratory testing programs in Africa as part of the Global AIDS program. More recently, he worked with the Robert Koch Institute in Germany and the Republic of Korea Centers for Disease Control to improve laboratory systems and national security against the threat of biological agents. He was passionate about this work, even to the point of wanting to be a part of conference calls on specific biosecurity topics while he began treatment for cancer.

Perhaps what his colleagues will remember most about Toby, though, was the delight he took in mentoring the next generation of public health professionals. He encouraged and supported the careers of many researchers and public health professionals across the agency, in academia, and in other organizations. He enjoyed learning more about the work his staff was doing, often asking questions that demonstrated an impressive breadth of knowledge, or an intense intellectual curiosity about developments with which he was unfamiliar.

Toby was not only an informal mentor, but saw the critical and ongoing need for leaders who understand both the science of public health and the principles of emergency management, and—most importantly—who understand how those pieces fit together within a CDC emergency response. To this end, he served as faculty in the Office of Public Health Preparedness and Response’s (OPHPR) Incident Management Training and Development Program, earning an Honor Award from OPHPR for his efforts in 2017.

In his brother's words:

"It would be enough to remember Toby for these 'headline' professional accomplishments, but it needs to be mentioned how Toby conducted himself at the CDC in such a way that he became beloved by his many colleagues there. Balancing his keen intellect with a compassionate regard for the people around him, Toby was known for being able to bring out the best in his associates and to navigate complex or charged, and emergency situations. In many respects, a central aspect of Toby's legacy is the cadre of public health officials he mentored over the years, helping them to realize their full professional potential so they could continue the public service mission that was so important in his own life."

Toby's quiet, calm demeanor was an asset in the Emergency Operations Center and in day-to-day interactions. Colleagues describe a man who was intensely pragmatic and surprisingly funny. Dr. Steve Redd, OPHPR Director, shares this sentiment, "With a sense of inexpressible grief, we mourn the untimely death of Toby Merlin. We have lost a friend, colleague, and leader. I will miss his advice, intellect, and sense of humor."

…"Toby was an exceptional person and physician-scientist who was fully committed to protecting the public's health from emerging disease threats, whether naturally occurring or bioterrorism. We will miss him very much," said NCEZID Director Dr. Rima Khabbaz. "Our hearts go out to his family and loved ones at this difficult time."