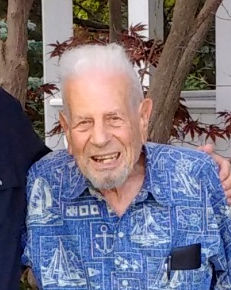 Eugene (Gene) Weinberg died after a short illness on March 8, 2019—just a few days after his 97th birthday. He had a long and distinguished career in microbiology, and was a member of the American Society for Microbiology for more than 70 years. He had many friends and colleagues in the ASM.

Gene was a pioneer in research on the roles of iron and other minerals in health and infectious diseases. He was recognized nationally and internationally, authoring more than 150 scientific publications, reviews and several books. He continued to stay up-to-date on the latest iron literature and was still publishing in his 90's. He had a remarkable ability to bring together various seemingly incongruous scientific findings and make thematic sense of these, as no better illustrated than by his foundational review "Iron in Infection" (Microbiol Rev. 1978). This review spurred interest in research into microbial pathogenesis and iron in many laboratories. In later years, he was interested in how the concepts of "iron withholding" and "nutritional immunity" played roles in cancer and auto-inflammatory diseases, as well as infectious diseases.

Gene was a veteran of the U.S. Army Medical Laboratory Corps (European Theatre) and later was a Commissioned Officer in the U.S. Public Health Service. He went on to spend a long and distinguished career as a professor of microbiology at Indiana University Medical School. He received the Amoco Award for Distinguished Teaching from Indiana University in 1974, and was an ASM Foundation for Microbiology Lecturer in 1984. In 2017 he was inducted into the ASM's Seventy Year Membership Club; he proudly framed the induction letter and certificate and displayed it next to his desk at home.

Gene is survived by his best friend Fran after nearly 70 years of marriage and by his daughter Barbara and son Geoffrey (Professor, University of Rochester School of Medicine & Dentistry), 4 grandchildren, and 3 great grandchildren; 2 other children predeceased him. Gene and Fran were integral in founding the Bloomington Jewish Community Center (now Congregation Beth Shalom), and they were long-time board members and served as congregational presidents.

Gene was an early advocate of promoting women in health science careers, and he founded the IU Medical Technology Program as a career path for both women and men. He was also a strong and supportive mentor of young scientists. He encouraged, offered advice, promoted careers, maintained contact with those he had mentored, including the 4 of us, until his passing. Gene was still an Emeritus Member of the ASM at the time of his death. He will be greatly missed.