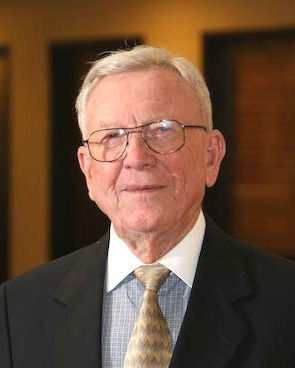 Willis Avery Wood (Woody) passed away Jan. 17, 2021, at age 99, from complications of a broken hip. Wood was a long-time member of the American Society for Microbiology (ASM), and served as President of the Society in 1980.

Wood earned a BS degree in Bacteriology from Cornell University in 1947. Professor Irwin C. Gunsalus, widely known as "Gunny." was his faculty advisor. Thus, began an association that followed them from Cornell University, to Indiana University, to University of Illinois, and beyond. After army service (1943-46), Woody became a technician for Gunny and Wayne Umbreit. He helped discover the role of pyridoxal phosphate as coenzyme for tryptophan synthetase of Neurospora sitophila and tryptophanase of Escherichia coli. Woody followed Gunny to Indiana University where he earned a Ph.D. in Microbiology in 1950. His thesis was on the discovery of alanine racemase in Streptococcus faecalis, and its requirement of pyridoxal phosphate as coenzyme. In 1950, he joined the Dairy Science Department at the University of Illinois where his research concentrated on carbohydrate metabolic pathways in Pseudomonas putida and Aerobacter aerogenes. In 1955 he received the Eli Lilly Award in Microbiology and Immunology.

Wood became Professor of Agricultural Chemistry, Michigan State University, where he participated in the formation of the Biochemistry Department and the design of the Biochemistry Building. He served as Department Chairman, 1968-1974. In Woody's lab, a major research effort was on the characterization of 2-keto-3-deoxy-6-phosphogluconate (KDPG) aldolase of Pseudomonas putida. Intensive chemical analyses by his grad students and postdocs, as well as amino acid sequencing, and growing large crystals, led to x-ray crystallography with Professor of Chemistry, Alexander Tulinsky, which confirmed a boat propeller arrangement of 3 identical subunits around a 3-fold axis of symmetry. He also investigated the mechanism of activation of L-threonine dehydratase of E. coli by adenosine 5’-monophosphate (AMP). After years of graduate student and post doc effort, it was established that, while pyridoxal phosphate served as coenzyme, AMP acted as an allosteric ligand that promoted dimerization of the identical subunits. This in turn greatly decreased the Km of the dehydratase for L-threonine. This the only known example where ligand-induced oligomerization results in an apparent activation of an enzyme.

While at Michigan State, Wood developed a practical recording spectrophotometer by replacing the Beckman DU Spectrophotometer electronics with known photomultiplier feedback loop electronics to give an output to a recorder that is proportional to absorbance. He then designed an automatic, programmable cuvette changer. With the changer and the new photomultiplier arrangement, up to four enzyme-catalyzed reactions could be followed and recorded simultaneously. The system was co-patented, manufactured by Gilford Instrument Laboratories, and widely used in enzyme research.

Wood's lab, populated by a mixture of undergraduate and graduate students, post docs and visiting established scientists became known as the "Wood Institute." Over a 30-year period at Illinois and Michigan State, 64 students, post docs, visiting scientists, and lab technicians participated in the research programs. Funding for their work came from the National Science Foundation, the National Institutes of Health, the Atomic Energy Commission, and the Agricultural Experiment Station of the College of Agriculture Michigan State University. During this period, Woody was a member of the Board of Directors of the Gilford Instrument Laboratories, Oberlin, Ohio. He was a founder and first president of Neogen Corporation, Lansing, Mich. He was appointed to the Council of the National Institute for Dental Research in Bethesda Md. Woody was involved in management of the annual meeting of the American Society for Microbiology (ASM) and was elected President of the Society in 1980. Later, he was elected to Honorary Membership in the Society.

In 1982 Woody became Director of Microbiology for the Salk Institute Biotechnology Industrial Associates (SIBIA) in La Jolla, Calif. His research on microbial enhanced oil recovery was supported by Phillips Petroleum. In 1990 he joined the Agouron Institute as principal scientist. In semi-retirement, he was vice president and member of the Board of Directors of the Institute. In 2010 a reunion of the "Wood Institute" members took place in connection with the 50th year celebration of founding of the Biochemistry Department at Michigan State University.

When the Dean of the Agricultural Experiment Station at Michigan State asked: "How do you motivate your students?" Woody's reply was, "I only provide a functioning laboratory with an intellectual and inquiring environment. I also want them to investigate a problem of major consequence. Beyond that, I give occasional advice and review their results. The students and postdocs know they are working for themselves. When they accomplish their goals, they graduate, or for postdocs, they then move on to pursue their career goals."