END_OF_DOCUMENT_TOKEN_TO_BE_REPLACED

Julie Villanueva talks about Lab Response Network, an infrastructure designed to detect and stop the spread of biothreat agents and emerging infectious diseases.

When a new biothreat or emerging infectious agent threatens, how are diagnostic protocols put into place? It’s up to the Laboratory Response Network (LRN), a multipartner network of public health, clinical and other labs, to generate and distribute reagents, and provide training to detect these threats. Julie Villanueva, Chief of the Laboratory Preparedness and Response Branch at the CDC, talks about the LRN and how no two weeks on the job are alike.

In the mid-1990s, the CDC joined public health representatives along with the Departments of Defense and Justice to determine the best way to prepare and respond to potential bioterrorism threats. The result was the Laboratory Response Network (LRN), founded in 1999.

The LRN provides infrastructure to detect potential pathogens. Though first put into place to detect and prevent bioterror events, the LRN has also been able to detect infectious diseases that have emerged through other means.

When a new disease emerges, there are typically no widely available tests to diagnose the disease. The CDC works hard to quickly develop diagnostic tests, validate the tests, manufacture the necessary reagents, and ship these out to the reference labs that are part of the LRN. This ensures that each lab can accurately reach the same result with the same sample.

The laboratory response network requires more than just developing and deploying diagnostic tests. The LRN must also provide What diseases keep Julie up at night? A viral hemorrhagic fever is one, and microorganisms that evolve quickly and have high pathogenic potential, like influenza virus, is another.

“Our collaborations across other federal agencies like the FDA and the USDA are really important for us to stay on the cutting edge of what could be emerging.”

“The LRN primarily focuses on diagnostics, this is what the network really does. It’s made to be able to detect biothreats and emerging infectious diseases in both clinical and environmental samples.”

“Every outbreak has been different in a different way, and I’ve learned something every time. I think that each outbreak has taught us a few things that work well within the network and a few things with which we can improve, and continued improvement is very important to us. For example, the Ebola outbreak in 2014-16 really highlighted the need for biosafety and biosecurity procedures all across not only the network but also our hospitals...we learn something different from every outbreak.” 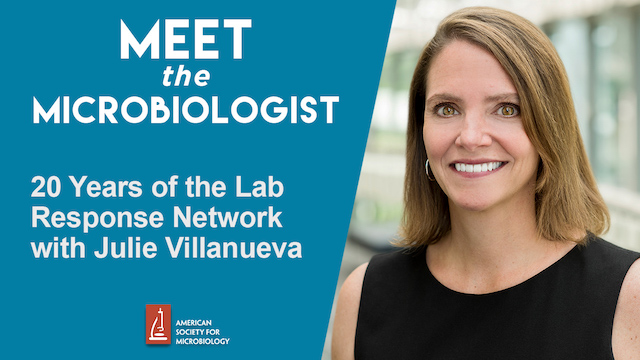 
Fluorescence in situ hybridization, or FISH, is itself a technology that relied on many other discoveries: the structure and base-pairing rules of DNA, the discovery of the molecular synthesis of fluorescein. In FISH, a probe consisting of complementary sequence conjugated to fluorescein is used to detect and localize sequences that hybridize with the probe, which can be visualized by fluorescence microscopy. Today, a number of probes can be used to detect different wavelength signals associated with different sequences, but when the technique was being developed in the 1960s, the first probes were labeled with radioactive nucleotides. This allowed visualization by autoradiography, which used X-ray film to capture where in a sample the probes were within a given sample.

The history of the FISH technique, which started as ISH since no fluorescence was involved, was developed by Joseph Gall and Mary-Lou Pardue and is nicely summarized in a 2016 Methods article penned by Gall, who as of this recording is 91 years old. In it, Gall discusses what was one of the greatest challenges in developing a protocol for in situ hybridization: denaturing the sample DNA. The DNA needed to be denatured enough so that the hydrogen bonds of the nucleic acids became available for probe hybridization to occur but not denatured so much that the DNA completely lost its structure and could no longer hybridize. Gall worked with Xenopus, or frog, embryos, and in his piece he describes the different attempts to denature DNA, as well as his use of autoradiography in the piece, and here I’ll quote:

"I am occasionally asked why we used the cumbersome technique of autoradiography for these first in situ hybridization experiments and indeed for all our experiments during the next few years. Fluorescent in situ hybridization (FISH) seems such a natural choice now, with its superior localization and ease of probe synthesis and detection. The answer is actually quite simple: there were no fluorescent nucleic acid probes available at that time. Even if there had been, fluorescence microscopy was still in its infancy and microscopes with epifluorescent illumination were not in general use. When David Ward and his student Pennina Langer showed me their first biotin-labeled FISH slides in the late 1970’s, I was still using the same awkward fluorescence microscope I had put together in the 1950s. They had purchased a commercial epifluorescence microscope that was considerably easier to use and much more efficient."

Gall goes on to describe Langer’s elegant experiments developing the first true FISH, using fluorescent probes, and includes several very nice images from Langer’s thesis, as well as some of his original autoradiographs. Gall and Langer worked on this technique in eukaryotic cells, but it’s easy to see how this method could be adapted to diagnosis of infectious disease, by detecting microbial nucleic acids from patient samples such as sputum or blood. In fact, FISH-based technologies are some of the most rapidly run tests and are one of the test types that have facilitated point-of-care or near-patient diagnostics.

Julie Villanueva talks about Lab Response Network, an infrastructure designed to detect and stop the spread of biothreat agents and emerging infectious diseases.